I have managed to get some more of my Finnish bolt action force completed being my Artillery 105mm Howitzer, it was fun to paint and to base up. 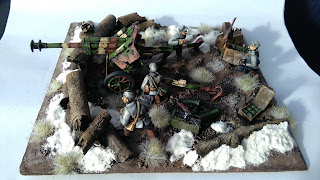 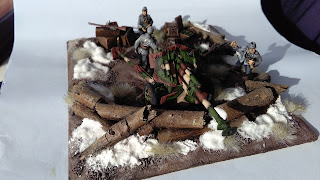 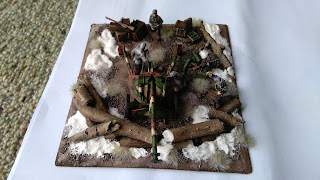 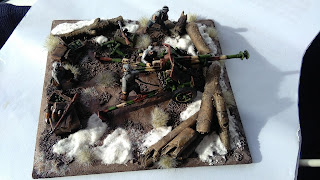 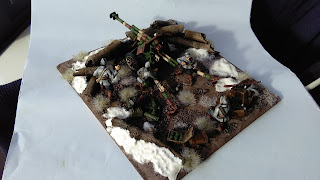 I have also got my Captian Hq model all done , come up rather well I thought 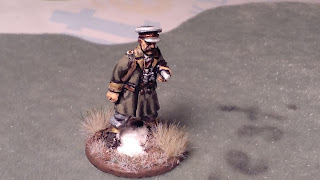 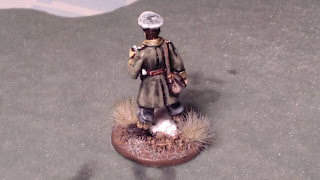 and my Medic model all done - also gave him an assistant armed with a pistol, an unusual model in that he has spectacles on 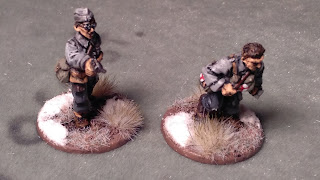 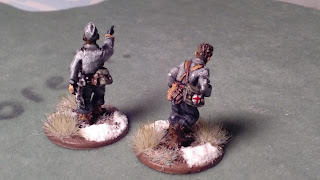 and my Panzershrek team all done as well -  probably will not be used much as my force is early war based but you never know - I may well go into late war one day. 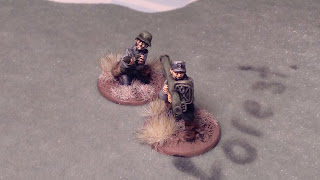 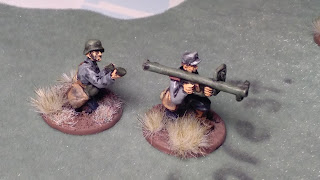 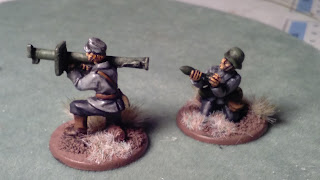 Posted by Battletwin at 13:59 No comments:

With the swift demise of Flames of War (being Version 4 now) in my gaming circles, mostly due to the crappy changes they have made to the game - and if i am honest I was getting bored with it as well -   it is time to move onto something fresh .....  my group of wargaming mates and myself have been on the search of a new WW2 gaming rule set to take its place. Well It looks like the WW2 Rommel game is a likely contender to do just that. 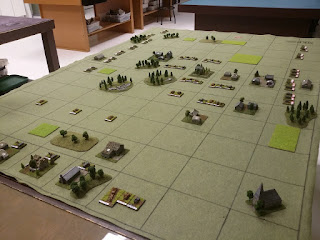 Rommel rules is a game to fight really big battles with i.e. corps or battalion levels rather than the Platoon level you see with FOW or Bolt Action,  so you can play battles such as Kursk or El Alamein and the like.  You can find the link here to have a look over on the Honour website by games designer Sam Mustafa

The game operates on a grid system for all movement and ranges etc so there is no need for a tape measures at all during the game - which is fantastic if you ask me (no more dodgy movements that can sometimes be seen at tournaments) The grid can be either 6" in size or 4" size, you could draw lines on your table cloth or simply just place little dots or crosses at every grid corner/intersection so it doesn't look so imposing to the gaming board - or better yet use 6" cork tiles and incorporate the terrain for each tile piece as well - this is what we plan to do. 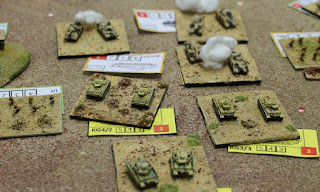 The game has a Operations battle board approach where you have ops dice available every turn to assign certain skills during the game whether it be in combat with aggressive or defensive skills and also strategic skills for movements/engineering and the like - sort of like Saga battle boards in a way - now this part of the game I really do like as it allows for so many different options and game play to keep the brain active in the game - as their is a lot of decisions to be made - and that's the key to good gaming .... keep the rules and measurements easy so you can concentrate on the the more tactical issues of the game. 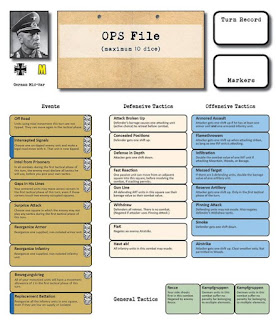 The game has a good system to work out engagements as well, all worked out on a combat grid (below) where using your combined combat strength on a slide table, roll a dice, you get shifts up and down depending on what skills you use on your battle board. use this value to see how many hits you end up doing - each yellow box represents a hit. 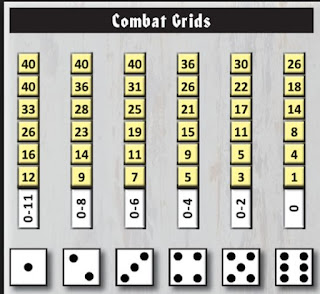 The game allows use for 15mm or 6mm figures - well any size really as its all relevant to the grid size used and what looks good on the tabletop - You could even use cardboard cards as units if desired. We have been using our old FOW 15mm miniatures which looks ok, but the grid is rather on the small side with only being allowed to have 3 units in any one grid square at one time - just looks a tad over crowed in my opinion (especially with terrain as well) - so I could be tempted to use future 6mm minis for it, but this is only if I ever get the urge to add models to my ever growing painting list that is !!  we will have to wait and see.

The game is divided into three eras of WW2  being early mid and late wars, very much like battlefronts FOW so I could use similar builds of army that I used in FOW. It also has an open architecture system thats very good, so you can recreate all those weird and whacky units that are not the normal - my brother is keen on this feature.

I have played a game or two now, its quick and easy to learn and a lot of fun, especially the battle boards, as it adds to game, as every faction (and era of that faction - early, mid and late war) gets a unique battleboard.  If you havent tried it and want to dabble into bigger battles for the WW2 period, its a worthwhile investment.