Fantasy Flight Games have brought out a new 28mm skirmish minatures game being Star Wars Legion ,  and I must say it looks epic

I have been reading up and watching a couple of UTube clips about it and so far it looks like a very well thought out skirmish game, I think it hits our stores around late March next year so I will be looking forward to it

The miniatures they have released so far look very good, I can see myself going the Empire side as the AT-ST model is simply awesome and the speeder bikes look very cool.
The rebel troopers also look top notch

Here are some pics I found 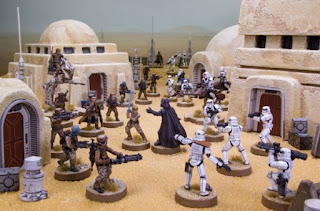 So all you Star Wars fans have a look into it - as I cant wait to see this on the tabletop.
Posted by Battletwin at 12:59 No comments: 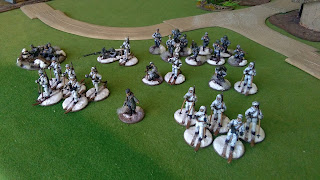 Its the second December Remember Tournament that is being held at the Local Club, a club run tournament that is run in memory of Nick Garden .  Last year we played 750point FOW armys, this year it is going to be 500 point Bolt Action  YAY.

Its Patrol level lists only so the lists can not have any Vehicles, AT or Artillery units or any Free units.  I can see a lot of Snipers being used and also a fair few MMG/LMG teams being used as well with these restrictions, but hopefully there's not to many vanilla lists out there.

I will be running my Winter War Finns for this, I have had to do some painting for it during the week which frankly was a struggle as its been very hot in the valley lately hitting into the 30's and even reaching 35°c in Upper Hutt so had trips to the beach and river for swims and the like, but I have managed to put the finishing touches on the army last night.

I am hoping to move my Sissi units into ambush while supporting a flanking move with the Winter War unit with flamethrower in support. My Sniper is a must as he has a special rule where he can hit on a 2+ when firing his scoped rifle (so good) .  My Anti tank Rifle is just there for the extra +2 Penetration on enemy MMG teams, also a flamethrower for good measure as I have not had the chance to use this yet.

I think there is 14 players all up with 7 on the Axis side and 7 on the Allies side ,  with myself on the Axis fighting the Winter War against those communist Russians !
Hopefully we have a good mix of varying nations, my brother is running a rather bold German Atlantic wall army - 4 units of 10 inexperienced units with LMG in each and a MMG team as well ..... thats a lot of firepower !  and he has a small unit of field police and 1st Lieutenant to keep them in check when it goes all tits up, as im sure it will do !

Should be a fun one day tournament
Posted by Battletwin at 18:21 1 comment: