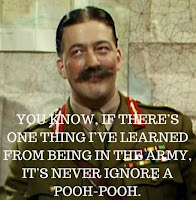 I have finally got some paint on some of my Congo figures.

I've decided to go a British Whiteman explorers faction with a Retired Officer in charge - imagine a fat old British gentleman with big moustache trying to relive his old days by taking a expedition into the Congo wilderness ..... yes that's the faction for me - reminds me of Gerneral Melchett from Blackadder goes forth,   ...  BAAH

Andy has decided to go for the Jungle tribes faction (typical)  with a large amount of small Pygmy warriors/archers lead by a Pygmy King, he also has some Cannibal warriors and a Witchdoctor preforming his rituals -  Savages the lot of them I say .. baah !! 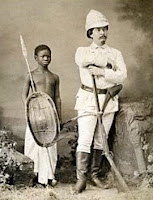 We have played a few games now and have to say that I am really enjoying this game, there's always a laugh to be had that's for sure,  once Andy and myself get a few more figures painted up I will endeavor to do a battle report no doubt.

I must say the figures were lovely to paint, very clean and great sculpts, got them from Wargames Foundry miniatures, it was a tad hard trying to get the dark skin colour right but I think they have come out quite good so far and have enjoyed painting them.

Righty o then , on with the painting pic's
First up are the cargo bearer troop, these are auxiliary's that can join any of my units, and by doing so the group can ignore a movement stress token, so can be quite handy at times 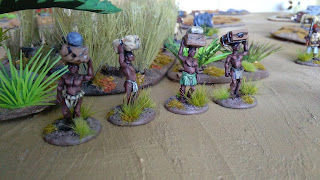 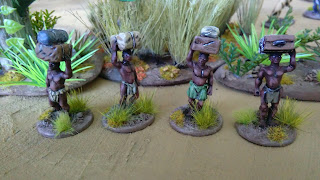 Next up is my Askari units, you can either take them as trained Askari or just the plain Askari bunch, the trained have better morale and are better in melee, but also are armed with rifles , while the plain Askari unit have the old Muskets .  I can run them as either but I tend to prefer Muskets as they apply stress tokens on their target when firing. 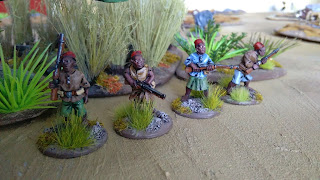 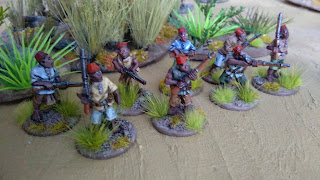 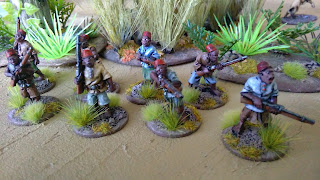 Next on the painting table is a unit of archers and some RugaRuga musketmen.  so looking forward to them, thought I would get all my African units done first and then concentrate on the few Whitemen units that I have last. The good thing about the Congo game, your force has about 25 to 35 figures which is good as you can finish a painted force quite quickly.
Posted by Battletwin at 17:04 No comments:

A month or so ago I went to my first bolt action one day tournament -  800 points with 3 games being played over at Kapiti games club.

It was a great day using my Finnish force  My first game I was up against an Italian opponent, he had a similar list to mine where he had two elite Bersaglieri units with MMG, Mortar, 100/17 Artillery piece with M13/40 Tank and the long range Saharariana Jeep in support - great opponent in which the result was a draw.

I lost my second game to a British opponent with SAS troops and Sherman tank with Universal Carriers (I disliked facing these in FOW and I think the feelings mutual in BA games as well) the mission was to kill the Lieutenant where I was attacking but I had some awful luck with the Fubar's chart, Artillery and not getting my reserves on - and those universal carriers were hard as once I lost my tank (BA-10 Armoured Car that is) early on I had nothing to hurt them as my AT gun was always in the wrong position to shoot them, but still it was a very useful learning game.

My third and final game was against a Yank using Yankies of all things -  US Rangers to be precise - 4 lots of 5 man ranger units backed up by 2 Sherman tanks !!  yes two of them (my little T-26a spent most game hiding from these two)
The game was played with dawn assault rules in play ,  so we spent the full 4 turns in the dark,  I got impatient near end of turn 2 and rushed at a building engaging in close combat - all my men died to his one lost (now that sucked!!) but my opponent got bored of me taking up ambush positions and decided to run at me -  only to meet a similar fashion due to my superior rifles ,  when the sun finally did come up it was all on !!!  I think he lost 4 units to my 5 units so it ended up in a close draw.... but a fun game even if most of the action was in the final turn.

The results were in and my brother Andy got presented with the best painted army using his Winter Germans army and I managed to score best army award,  we both got $20 gift vouchers to be spent at Scott Bowmans Kapiti's "Hobby Center"  (disguised as a pharmacy)  so it was off to Scotts store after the comp ended and spent my monies on a new KV-1 / KV-2 box set ...  a beast of a tank at 28mm scale !

The KV-2 tank is by far my favorite looking tank of WW2 with such a high silhouette and its massive 152mm howitzer !  I made the tank up the following Sunday night and I was quite impressed with the box set , as you get the KV-2 and KV-1e turrets and also 6 soviet men to go with it.  I intend to use the KV-1e for my Finnish war army and the KV-2 for maybe a Soviet army in the future .... I will have to start painting it soon  ..  I have taken some photos of it to show the size of this beast. 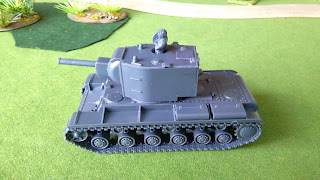 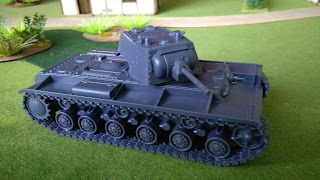 It was a very relaxed and fun tournament so I am looking forward to the next one to be held in late September or October this year,  hopefully its a 1000points and a 2 day tournament as that would be good.

But when a good mate of ours got some Baccus 6mm 1812 Napoleonic figures we were mildly interested at first. Then he explained that being at such a small scale such as 6mm you could find yourself playing a grand battle such as Borodino, Ligny, Talavera, or Waterloo for instance. So this sealed the deal as they say and Andrew and myself and another wargaming mate of ours all got some figures each.

I will be representing the French forces, my brother has opted to go the Russians, with the other two being the British and the Austrians.

Now, I have been painting in 28mm for some time now, so its going to be tough to go all the way down to painting 6mm figures ..........  now I thought 6mm was going to be a simple blob of paint for head , another for the chest and a third for the legs- voila done, but no !  with having a decent look at the models they have a extraordinary amount of detail to them,  you can even pick out the buttons on waist coats on some of the models ..... hmmm this is going to be a challenge but hey im looking forward to it at this stage - this might change after doing a brigade's worth mind you !!

We have settled on the Polemos rules for playing the game as it is specifically for 6mm scale. Its quite good, it has a random army generator where upon they opposing sides decide on the base limit for the army (basically the size being number of units) and you roll for what type and ratings for each brigade, depending on what you roll may end up with a decisive General or even a Plodding General such as Simmerson !!
We have played a few mock games so far on the dining table with mdf bases and its quite good,  of course there is always issues with new rule sets and trying to decipher what they mean but with the help of some forums we have had overcome some of these early mistakes, and the game went smoothly on the second game.

I have some French artillery being 8pdr's and also 6pdr Horse artillery.
Plenty of horse with units of Lancers, Hussars, Cuirassiers, and Dragoons.
A large amount of Line Foot Troops including units of Voltigeurs to give me some skirmish bases.  I might even paint up a unit in Spanish colours to represent a unit of Raw Foreign troops (you can end up with these depending on what you roll on the random army generator tables of course)

So thats the next adventure I will be tackling on the painting table , once I have finished a few more Finnish units for bolt action army that is an maybe some congo figures

Posted by Battletwin at 17:05 No comments: