Well lets some up the summer weather shall we over the Christmas period  ... Shitty with a side of shitty  ..... , so with that explained Andy and myself had found some time to get some terrain made - Jungle Terrain !!

We decided to make jungle terrain as we have both been playing a new miniatures game being CONGO , a fantastic and really fun 28mm skirmish game from Studio Tomahawk (makers of Saga) where 2 players (with choice of 4 factions) fight in the jungles and Savannah lands of Africa. I will be posting more on this game a little later.

The other reason we decided on the Jungle terrain was that Andrew has got some new Aussie Bolt Action figures for his new Papua New Guinea army based on the Kokoda trail. He has got some native figures to go with them (looks great with big fuzzie hair) these will look great when gets around to painting them.

Some photos of the overall table showing some of the terrain we have made
Works well with the saga board, ponds and river we have already got made up.
These photos showing a typical Congo game setup. 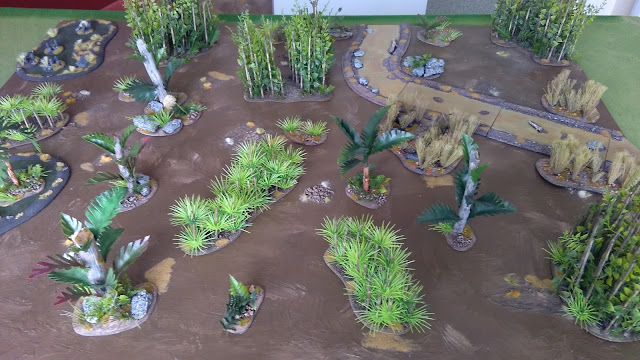 So with some materials : 3mm MDF board, a Hot glue gun, a pack of bbq skewers, a assortment of aquatic plants, bark nuggets from the garden and some old twigs from the beach.  right we are all set to make some terrain then and some resene paint test pots. 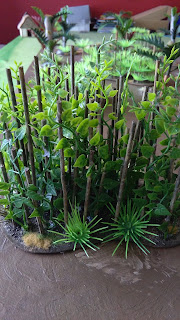 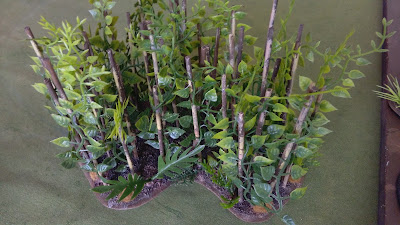 First up we have some dense high area terrain that we like to think of as a thick bamboo/vine thicket, we made these by drilling BBQ skewers into a 3mm mdf base and then basing with tea bag leaves (looks like a thick leaf base) and then painting (very hard to paint the bamboo trunks once all glued in !! so I recommend doing this before hand)  and then we applied all sorts of vine type aquatic trees up the trunks and some fern types at the base. 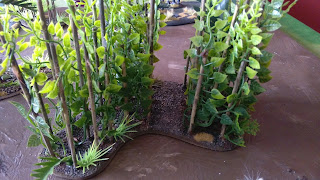 Now you could either make it impassable terrain that blocks line of sight (which works very well, as long as there isnt too many of them, or you could place a green felt below and lift when troops go inside the area. overall very happy how these turned up. 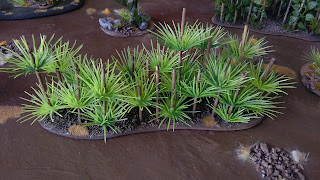 This photo above is a smaller bamboo version of the first ones we made, same effect except the aquatic leaves we used had a central hole, so simply placed one or two on the stick and glued in place, easy and effective 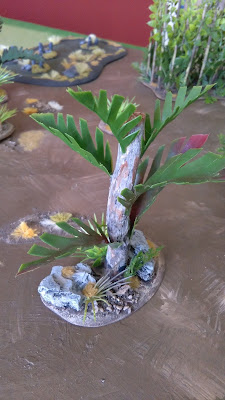 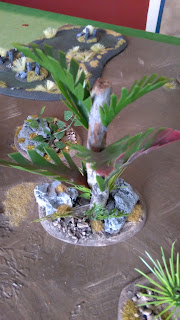 The next one is simply a stick that we found at the beach, chop to length, drill some holes and place some fern type aquatic leaves, and wolla ! you have cool looking Balboa/Fern type tree - well almost ....
Next is some smaller pieces that can be scattered around 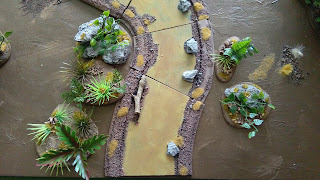 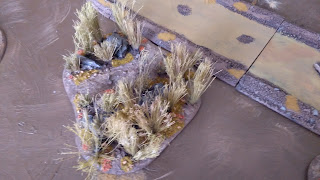 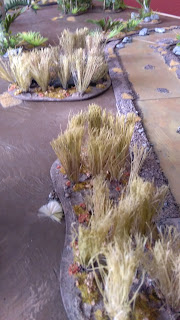 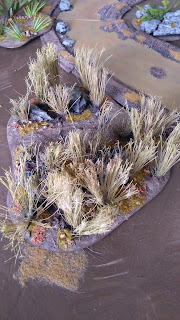 Photo of some water reeds that are common in the wetlands of the Jungle. This one was easy - simply take a old broom/brush and pull out the bristles (they should some out as one piece as they have a wire end to them),  drill some holes in mdf , base and paint ... they come up very well and look good with the river and ponds we have.

We intend to make some African Huts (enough for a small village)  and also some pieces for a Savannah table as Congo games can be played either in the jungle or plains of Africa, so hopefully have these done soon.

Posted by Battletwin at 09:59 No comments:

Well Andy's been at it again and found time to paint some more of his German bolt action models.  His original painted models can be found here. He has now completed all his weapon teams he needs, Flamethrower, Sniper, High Command team and a Panzerschreck Anti-tank team.  He only needs to finish off his Nebelwerfer also his Pak40 gun teams and I think he has finished it all.

They all look very good indeed in their winter theme, something I may well adopt on my Finns. 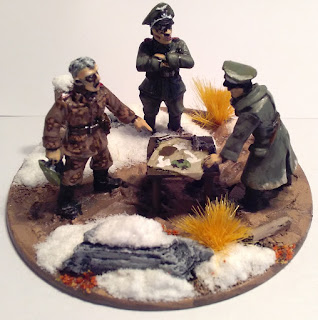 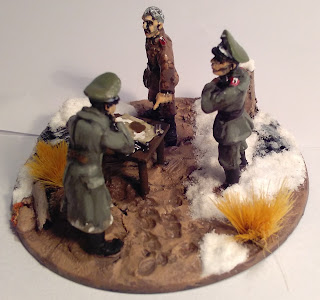 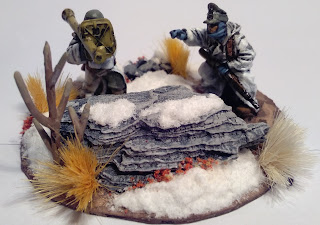 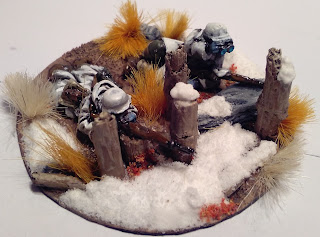 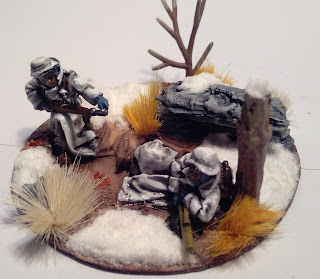 I will have to start painting and soon .....

BOLT ACTION GAMES AND SOME FINNS

Its been a while since my last post.  Its been a shitty summer so far hasn't it !
I havent done that much sailing as its been just too darn windy with the wind often over 25knots most days, but I have been out windsurfing a lot .....  maybe a little too much truth be told as I haven't done much in the way painting any models !! .. well that's my excuse at any rate...

I had played several games of Bolt Action against my brother Andrew over the holiday period, I ran my Finnish force (still not painted hence why no photos) against my brothers German force.  With only a 2 games of Bolt Action under my belt I found the Finns quite easy to use and so far I do like them. Their trained huntsman rule and specific unit ambushing rules are very good indeed and my sniper seems to be a very good option, as does my tough fighter ability's for my infantry squads. The Mortar options however seem a waste of points to me unless their is a stationary target to range in on, my brothers Pak40 was a good test subject but even after 2 rounds of ranging in it took another further 2 turns to get it down to one man crew (I then got fed up and snipered it). My twin turreted T-26 tank option is a fun choice if its on a heavy terrain table being able to dish out 10 dice of MG fire .... Andy doesn't like it too much !

I must admit it will take several more games of Bolt Action to get the hang of it, for instance the close combat seems very deadly to me and very different to other systems, all it takes is a few horrible dice to turn a seemingly reliable option into a nightmare result.  for example my brother ran his 10 man German Veteran unit (with 2 SMG and 4 assault rifles) against my 7 man Finnish Vet's with Tough Fighters rule ....... Andy gets a total of 4 hits with myself getting 5 hits, which has made me the winner so Andy's troops all died............... lesson learnt - Andy shoots instead from then on !!!!!!!

Also knowing when units should go down and when to ambush units will hopefully come with experience (the Sissi Finnish troops have a bonus here as they can advance and the turn dice into ambush as long as they don't shoot ... so rather handy for beginners like me)But apart from some niggly rules to learn and put in practice correctly, it was a very good couple of games. 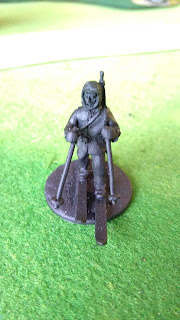 Well I have been a little busy with getting more of my Bolt Action Finns made, based and ready for painting. Those ski troops look very cool and all, but bugger me what a pain in the arse to put together ! took me ages to get through ten of them ..... and i have still got another ten to do. 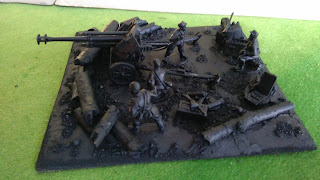 The weapons teams were all rather easy to put together, but the Howitzer was a different story, quite fiddly and the bottom gun shield was missing so I had to make up one from scratch using plasticard. I made all the gun teams with log emplacements which look rather good I think, I will cover them with a dusting of snow and some tundra tuffs and they should be great with the triple colour Finnish Camo scheme they had. 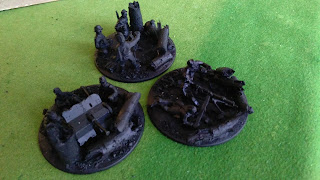 All the tanks are now made, these were very easy to put together and should be fun to paint, just have to decide whether to paint them in the Finnish Camo scheme, or maybe a white wash, or perhaps leave them Soviet green ?? unsure at this stage.

But overall progress is coming along nicely .. if not a little too slowly for my brothers liking, but hopefully have these troops will see the painting table soon. I now have a dead line to have these finished by and its July, as I have been told that theirs a Bolt Action tournament being run at Panzershrek, so I will be running them there.
Posted by Battletwin at 12:58 No comments: