I have another local tournament coming up in early December

It is the inaugural club run tournament that will be run each year in December in memory of the great local Wargamer Nick Garden, that sadly past away late last year.  Each year the game format will change but we will all play for the Nick Garden Memorial Cup.

This year it is going to be a themed 1000point MidWar Flames of War tournament from North Africa Book.  YAY - I finally get to run my mid war American force !

There is a strict list building policy in place with the motto of
"Be Like Nick, Don’t Be a Dick"
which is great, hopefully no over the top power lists to be used  ...


I am going to run a USA Infantry list , simply because I have never done so before now, and I have some stuff that I need to paint up for it. I have always liked to pick my American support vehicles that were used in Operation Torch, such as the great M3 75mm GMC half track tank destroyers and T30 75mm HMC howitzers ... both great looking models and rather cheap compared to the more commonly used M10 and Scott equivalent's
so here's the list I will be running 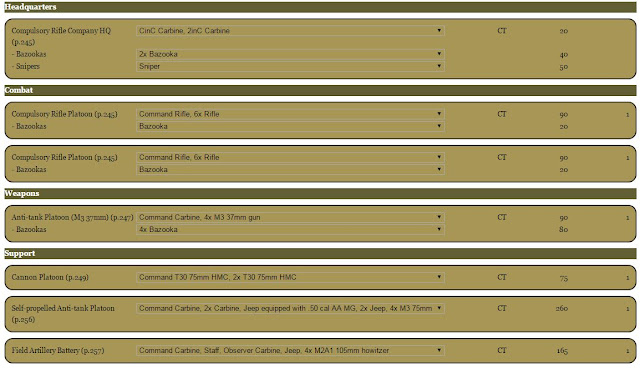 I have more than a few bazooka's in my list (eight in total in fact ! ), to take care of any tanks that are hard to deal with,  two of them are part of my HQ support option that I will probably attach to my 37mm AT platoon to give it a total of 6 bazookas , plant them on an objective and see if the tank armies can shift me !  and if I am attacking I will leave my guns behind in support fire mode and run my 7 man Bazooka filled platoon into tanks and use their tank assualt 4 to good effect,  should be fun.  Also got a sniper team, I haven't really used them that often so will be good to use one of them again. The Artillery battery of 105's is a new addition for me (having used the T19 HMC before), but with TOT it should be good to land a few shells on top of tanks.


I have a fair amount of painting to do before the big day. As you can see from the photo's attached, I have to paint the ugly looking models I got from a bring and buy table to match my desert themed look. I should get all this done before December 10th.  Should be a good little tournament I think, hopefully it has a great turnout.

I have been busy the last week and have now finished my last lot of mounted cavalry Heathguard for my Milites Christi saga army.

I think they have come out rather well and quite pleased with them overall,  especially since they were a Franks force originally with me having brought them at bring and buy table...... now they are a Crusading Franks force with Milites Christi following. I may very well add some crossbowmen at a later stage to give it some shooting strength but I am keen to run it as is for the mean time and see how it all works out.
Hopefully get to play with it against one of my brothers saga armies soon and give a report on how well it goes.

So without further a do here are some photos of the entire army ......all finished at last 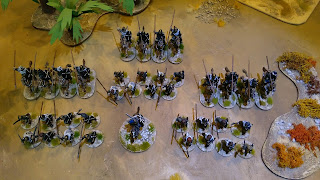 The Warlord on Horse 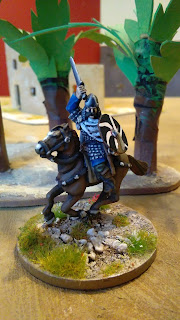 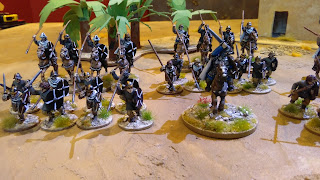 So on the weekend I plan on playing a game against my brothers Pagan Rus army..... you could say that the Pagan Rus are visiting the Constantinople shoreline and the Crusading Franks plan on a bible bashing visit against the vile Pagans .... GOD WILLS IT !
Posted by Battletwin at 21:00 2 comments: