Last weekend my brother and I had another game of Saga. I choose to run Andy's Strathclyde Ponie force and with that Andy choosing his Bretons - so all mounted armies facing against each other - should be interesting.....

Now I have only played the pony force a couple of times before, but have faced against it a fair amount so had a decent idea of how the battle-board worked to make the most of the army. The battleboard skills are mostly geared up around melee (with no shooting in the army) with one deadly exception - the nasty harassment skill (shooting attack with 2 dice for every unit held off table and another 2 dice if it was a rare dice used - so a very nasty shooting skill with 8 dice within L of table edge)

We choose to play a normal kill the warlord mission, so I had went for a large 8xHearthguard unit (which I think was a mistake in hindsight facing Bretons) 2x units of 7 and one unit of 6  Warriors, I also had 3 units of 4x Warriors off table (so I could do my skills as mentioned above) Andy had 2 small units of Hearthguard with 4 units of 6 Warriors and big unit of Levy - his force is all javelin armed

I set my force up so that the Warlord, Hearthguard were centralized and Warriors were bunched on right and one extreme left. Andy did somewhat the same with Levy next to wheat field and Hearthguard lurking next to swamp. 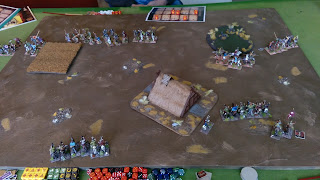 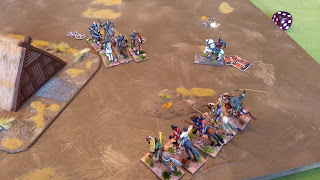 So I am left with charging his Warlord with mine, as a Warlord's pride must be challenged !
I charge valiantly in using my Doomriders skill, but we must be both worn out as we cant seem to hit each other ........ 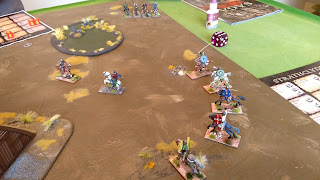 So we are both left facing each other resorting to just shouting verbal insults
Andy decides to surround my warlord and shoot him off his horse, but I manage to save all hits. Far to the left side of the table my Hearthguard charge another unit of warriors and with the all impressive "Wild Charge" skill in place where you get an additional attack dice, needless to say they decimate the unit ... but Andy also has a fantastic round of dice and he manages to kill 3 of them ... boo 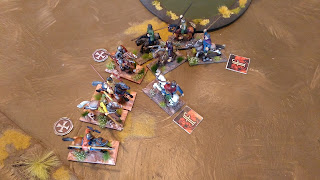 The end of the game came when Andy finally charges my Warlord with his own and he bested me as he could dish out my hits onto his retinue, where I was left with 3 hits with 2 of them failing to save.  So all in all a fantistic close game where the goal was to kill each others Warlord.  I may have been a tad reckless with mine but Andy made good use of my blunder and it sees him bag the win.  The Strathclyde force was a really fun force to play with, with some really cool skills,  as for them Bretons .... hmmm there good too.

Until next time
Mark
Posted by Battletwin at 12:36 No comments: