We have another Flames of War tournament in a weeks time, but this one is a little different. Its a themed event between the Russians and the Germans (and Minor Axis) that follows the history from the Barbarossa offensive in early war all the way to the defense of Berlin at the end of the war. So a 2 day event with 6 games being played - with the first two games being 1250 point early war, then 2 games of 1500 point mid war, and finally 2 games at 1750 points in late war.

As part of tournament, we are divided into two teams (Soviets and Germans) and those teams have missions where upon they have to attack (this takes over any auto attack/defend rules) but with the added bonus where the team that is attacking can decide who gets to attack who, so they can have a matched pair or even a total mismatched pair if they so choose that will benefit the teams overall performance, sounds a great idea
We also get to have a free infantry hero that gets a new skill each round (well that's if he lives of course - if he dies he gets amnesia and forgets the skills already learned and has to start from scratch again.... sounds a lot of fun (wish I had taken an Infantry force now LOL.
Also the team that has the most points at the end of each round will get one bonus platoon which can be given to one of their team players in the next mission ... this varies from mission to mission but could be an AT platoon or even plane support so will be worth winning to get this bonus indeed and can be used to help the weakest player/army in the team perhaps ......... I might need some more AT in LW I think as my AT assets are a tad shy


I decided if i have to defend and also attack in half the missions I would take my Tankovy force, main reason was that I haven't played with tanks for ages now and was a good a reason as any, and it lets me run my KV1e force in the LW army so a different army to most but be good to run over some infantry and I hopefully get to use my mine rollers.


So very much looking forward to this tournament ... with all the special rules and added bonus of picking your opponent should make for a fun weekend.

With another Flames of War tournament in a couple of weeks time, I have been busy painting up some Early War Soviet figures, being the little SU-12 assault guns.
Very cool looking guns on back of trucks, they have a decent gun for early war standards being AT5 with a 3+ FP roll, the best part is if they fail their 5+ truck save the enemy still has to their fire power roll as they have gun shields (so at times can be more useful than armour). They have volley fire rule also and if all else fails they some should provide some much needed artillery support to my T-60 tank army. 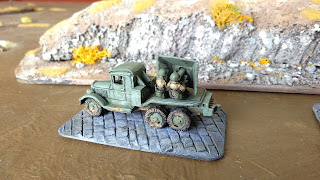 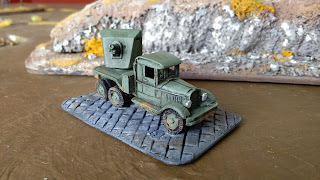 Also, I have finished my Peter the Hermit model, I will be using it as a mounted priest model for my Anglo-Saxon(Danes) force and also my Rus Princes force. Very humble looking donkey with a bible bashing priest preaching his gospel - looks a great model I think.
I could possibly use it as dismounted priest model as well, saying that the donkey is old and slow and somewhat stubborn, so moves at walking speed. 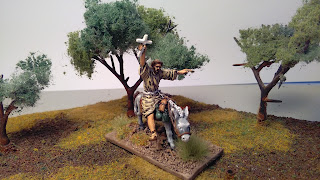 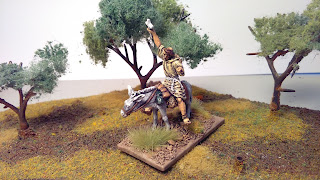 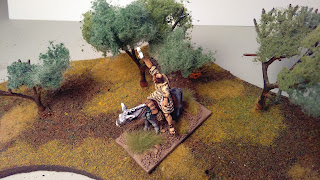