We played the "Across the Ford" mission, but set it up so that the river was an angle to make it something different. and also plonked down some terrain, marsh at one end of the river and some trees and building to make it interesting.

Saxons get the first turn and move quickly up and onto the right side ford, Andy stopped me doing the same on the other side with his annoying Frozen skill. 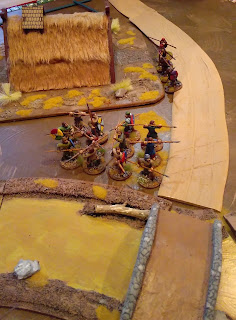 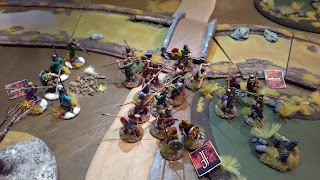 Well all in all a fun game. The Score was 10 - 7 in favour to the Pagan Rus, so a good win to Andy then. I think a combination of good use of his Steppe Nomads and that horrible Endless Waste skill helped him a fair bit. My undoing was not resting my units enough to counter this skill, but I thought if I could get early into combat and use my numbers against him it would be decisive enough to push on through on one side...... oh well , the Saxons shall have their revenge..
Posted by Battletwin at 23:18 No comments: