WORLD OF WARSHIPS AND MY VISIT TO BATTLESHIP COVE

Way back in May or June last year, my somewhat out dated home computer had died (just couldn't get it to start up) so I thought it was high time I got around to replacing it. So after getting back from holiday I bought a fairly decent computer for home. I havent really been a into computer games all that much for the last 10 or so years, as I would rather face my opponent over a wargames table or across the dining table playing a board game instead, but with the likes of internet games being released such as EA Star Wars Battlefront, one has to get more than a little interested again !!! - I had bought this as a Christmas present to myself , very cool game indeed - up to level 30 already

Very new to playing internet games but I have been playing a fair bit of World of Warships at the moment, its a lot of fun. My favorite ships at the moment is the Japanese Destroyers - being very quick and being able to fire torpedoes at short range . I have only just got my first Tier 4 ship being a slow and somewhat frustrating South Carolina Battleship , so freaking slow to load your gun, especially when your last salvo missed the target. Only went into USA Battleship's as its the only way to progress on to Aircraft Carriers and I am keen to give them a try. After a few weeks of gaming with the dreadful battleships I finally got enough experience to get me a aircraft carrier and have to say I really enjoy playing them, get to shoot down alot of aircraft and if your lucky a few sunken ships as well.
My brother Andy has gone down the German side favoring the Cruiser ships. One has to wonder when Submarines will enter the game ? now that would be fun, also where are the Italians , they had a rather large fleet in WW2 - and the French ? hopefully they will be available soon

Also been playing the World of Warplanes game, I like this game - but not that good at dogfighting other planes, so I have chosen to go down Soviet ground attack role, lost count of how many times I have hit the dirt and trees and blasted battleship conning towers, but fun none the less. My brother Andy has favoured fighters, he was completely useless in his first 3 games, but in the 4th he managed to shoot down 5 planes, his 5th game he shot down another 6 planes, and his 6th game he somehow managed 7 planes - so he is rather good. I think his record is now on 9 planes shot down in one game - showoff

Now having played the world of Warships game, I thought I would share some photos aboard such ships that I visited on my holiday to America I had last September. On the last full day of our holiday Andy and myself visited Battleship Cove, which is located in Fall River, Massachusetts (about an hour or so south of Boston). Once you get there you can see the array of boats they have on display - all lined up. The biggest there is the USS Battleship Massachusetts, then the USS Joesph P Kennedy Destroyer, and my favorite the USS Lionfish Submarine, they also have two PT boats and a soviet built missile Corvette Hiddensee.

We originally planned only to spend two hours here at Battleship Cove as we planned to visit Newport and surrounding Rhode Island area for the day, haha well that plan got completely thrown out the window as we spent close to 4 and half hours walking in and around looking at the ships. I will say this you have to be a fit and somewhat skinny buggar to be aboard these ships as there was lots and lots of small ladders and port holes you had to climb up and down / in and out and even under -  especially in the battleship - talk about an exhausting day ! I was absolutely knackered by the end of it but had a blast.

After a quick visit of the WW2 landing craft and surrounding Huey helicopters and naval planes we boarded the Battleship Massachusetts. Now this is a big ship - 210m long by 33m wide and a max speed of 27knots, with 1800 crew aboard. The battleship took part in the first landings of Operation Torch in 1942 and had taken part in Atlantic as well as Pacific operations to follow, she was decommissioned in 1947.  It has some very big guns with
9 x 16inch guns (410mm) main armament, the secondary armament had 20 x 5 inch guns (120mm) and with some 87 AA guns of varying types it is well protected. 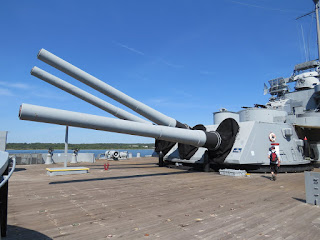 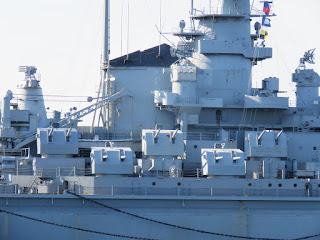 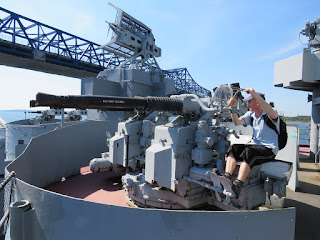 AA Bofors guns .....  saw the do not climb sign after Andy climbed on !  typical Andy 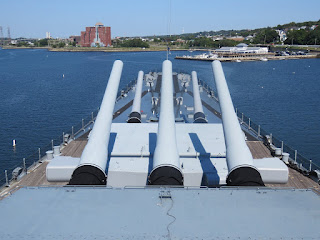 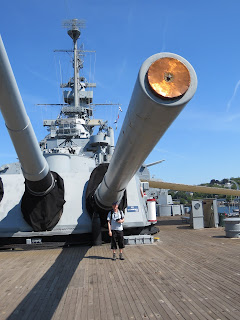 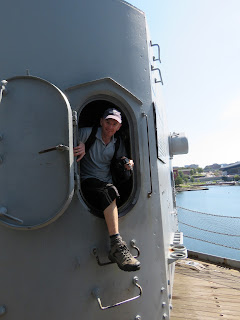 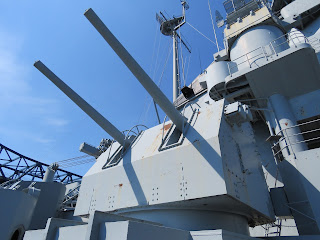 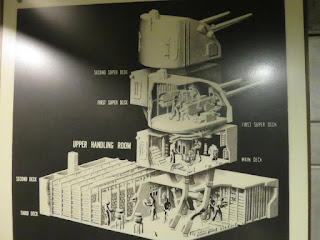 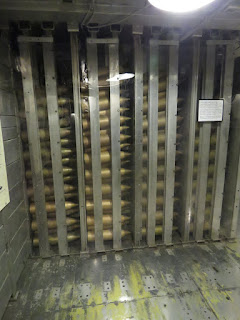 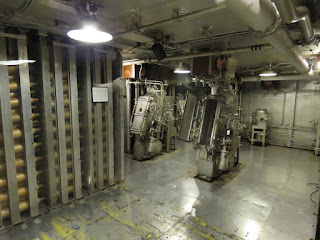 
The ammo loading and storage was very cool to see, they explain how it all worked and you could see the loading machine and ducting leading to each gun as you walked in the ship.
The top pitchure gives a 3d view of it working, the other two showing the magazine area. 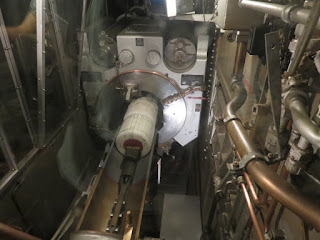 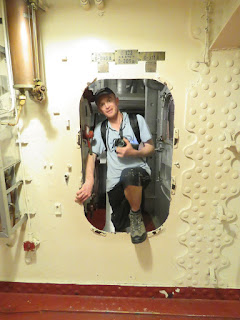 
Now with 1800 crew aboard its like a small village in there, and has everything from Barber shop to dentist, doctors, mess hall, huge laundry and kitchens, and every where you look there are 4 high beds. 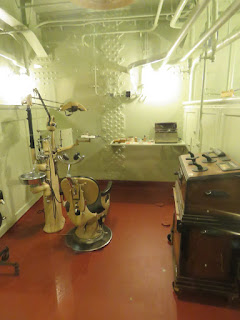 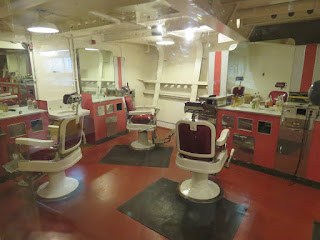 The barber shop and then nobody's favorite
being the dentists chair. 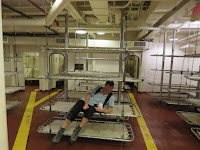 
Next we went aboard the USS Lionfish Submarine, where we were lucky enough to have a volunteer guide there willing to accompany us to ask any questions we had as we walked along, very nice old chap who saw active service on a sub in the late 60's, he had some very interesting tales to tell, during his career he was the guy who controlled the dive planes on the sub, he explained on how it all worked and what living conditions were like aboard such a ship.  For me the sub was the highlight of the day - very informative and interesting, . 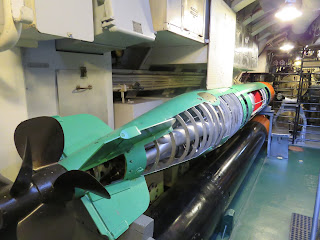 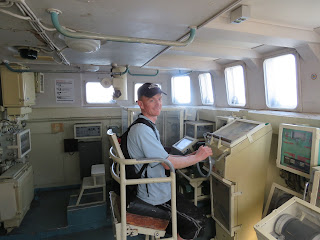 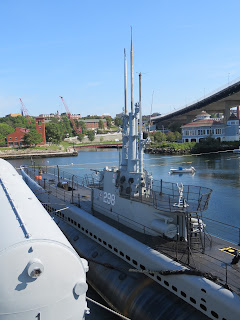