I am recently back from a 3 week holiday to the Upper East side of North America with my brother Andrew. Andrew and myself have always been interested in America/Canada, as its a great place to visit, with all the National Parks and History there is. I think this trip was our 6th holiday to North America over the years, so we are certainly no stranger to the place.

So I thought I would highlight some of the interesting places we visited in a small series of posts on here, so stay tuned over the course of the month to see what we got up to.

A brief account of what we got up to then :

This time we thought we would visit the Upper East and do some of the main historic battle sites and forts covering the History of French and Indian War 1754- 63  (or 7 years war), America Revolutionary War 1775-83, and the somewhat forgotten 1812-14 War between America and British Canada (or Mr Madison's war) ..... all being my favorite war periods (only exception would be the American Civil War for which I favor the Confederate side)

So after a long flight we landed in Boston and spent 3 days there, visited the USS Constitution frigate, Boston tea party site, Paul Revere house, Bunker hill sites to name a few, also went to a baseball game between the Boston Red Sox and New York Yankees ... absolutely loved it, great atmosphere and a great ball game to watch live, the ball park was a full house too. Boston lost but it was a close run game with the Red Sox's loading all bases twice. I think the final score was 13-9 to Yankees .... boo

After that we got a rental car and headed north on what was to be a true Stanton road trip holiday, through Maine, into Canada's New Brunswick and Nova Scotia area, then into the all French speaking Quebec, back down into upper state New York via Lake Champlain and then over to Canada's Niagara, then shoot over and down into Rhode Island and Battleship Cove and eventually flying out of Boston again  ... so a very enjoyable holiday indeed.

Halifax was nice city as was Quebec City, especially the old town part - pays to speak some french though (Andy and myself are not linguists) Niagara was better than I expected, thought it was going to packed with tourists but it wasn't too bad, we went on the Canadian side as we were told it was better for viewing - they weren't wrong ! very impressive stuff.

Managed to see many Forts over the trip, including Halifax Citadel, Louisbourg Fortress, Fort Beausejour, Fort Lennox, Fort Ticonderoga, Fort Niagara, Fort William Henry and few little ones in between. The highlight for me was Fort Knox on the Penobscot River in Maine - very impressive defenses for a riverside Fort.
Got to see a few National Battlefield sites such as Saratoga, which was a crucial American victory in the War of Independence, so nice to finally get to see.

We also went to Battleship Cove which has the largest collection of Naval Ships including the WW2 USS Massachusetts battleship, WW2 USS Lionfish Submarine, Cold war USS Joesph Kennedy Destroyer, PT boats and the Hiddensee - a soviet built missile class Corvette. We spent about four hours there, going up and down multitudes of ladders and climbing through hatch doors, pays to have a short skinny stature (I have the skinny but not so much the short) especially in the sub. It was a very good, but gets hot and smelly (grease and oil) down in the lower levels of the Battleship.

Halfway through the trip on the shores of Lake Champlain (lovely lake settled between New York and Vermont) we were treated to seeing a historical re-enactment battle while we were at Fort Ticonderoga. As it was a Sunday it was more luck than actual planning on our part and as it happened it turned into one of the highlights of the trip for us. The battle lasted about 1.5 to 2 hours long and was awe-inspiring to watch, very loud and tons of smoke filling the fields, epic stuff. The fort was a buzz with lots of people dressed up in battle uniforms and their family's were also dressed up to the times. Some folks stayed for the whole weekend in campsites and were very true to acting the part in thier costumes.

The battle was between the British and Americans in the War of Independence era. Browns raid was a small skirmish that took place outside the Fort in the old french lines that occupied the area, the Vermont militia and some Regulars attacked up the ridge and forced the Brits to retreat into the fort, the Americans never launched an assault on the fort itself due to small numbers but the raid was very successful.

The field was hook shaped with the public in the center of the hook which allowed all round viewing of the battle as you could move from side to the other easily to see the stages of battle. They worked so that the British retreat worked its way around the hook also which was a good idea I thought. The battle started with the Brits marching out of the camps they had among the fort, watching them go from column to line formation was quite impressive. The British General was on horse and throughout the battle you could see him cantering between the artillery and front.  The British cannons firing from the heights and lines of muskets lining up and firing was great to see, you wonder how they saw anything (main reason why the Brits wore Red and interesting fact : it was the most expensive coloured dye of the time)  The crowd was good as well, mostly they were familys of the men in the battle so you would hear young kids pointing out there fathers. Of course Andy and myself were cheering on the Brits ! 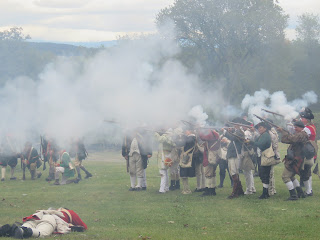 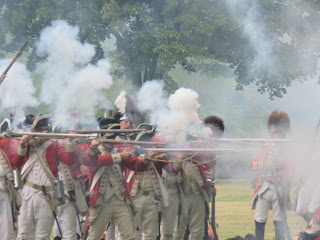 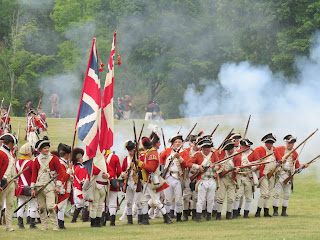 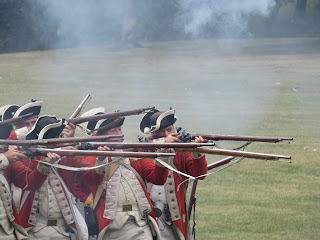 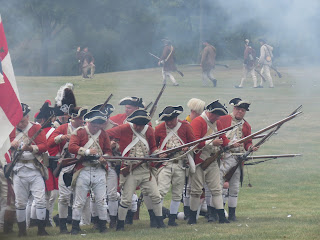 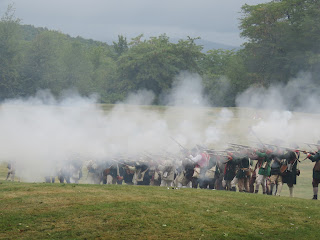 Will do another post soon no doubt about some of the Forts we visited, until then cheers.
Mark