Having followed our success of the table top we made late last year for our Saga games (found at link here), Andy and I thought we would make another one, but this time theme it on a desert base for the Cross and Cresent Saga faction battles.


Table size is 4" x 3", with an old 10mm MDF sheet cut to length and some Polyfiller and paint added we have a table to play on. Andy placed some grass tuffs and some pebbles in places but kept it to a minimum, with the idea of being able to place terrain on top when required. 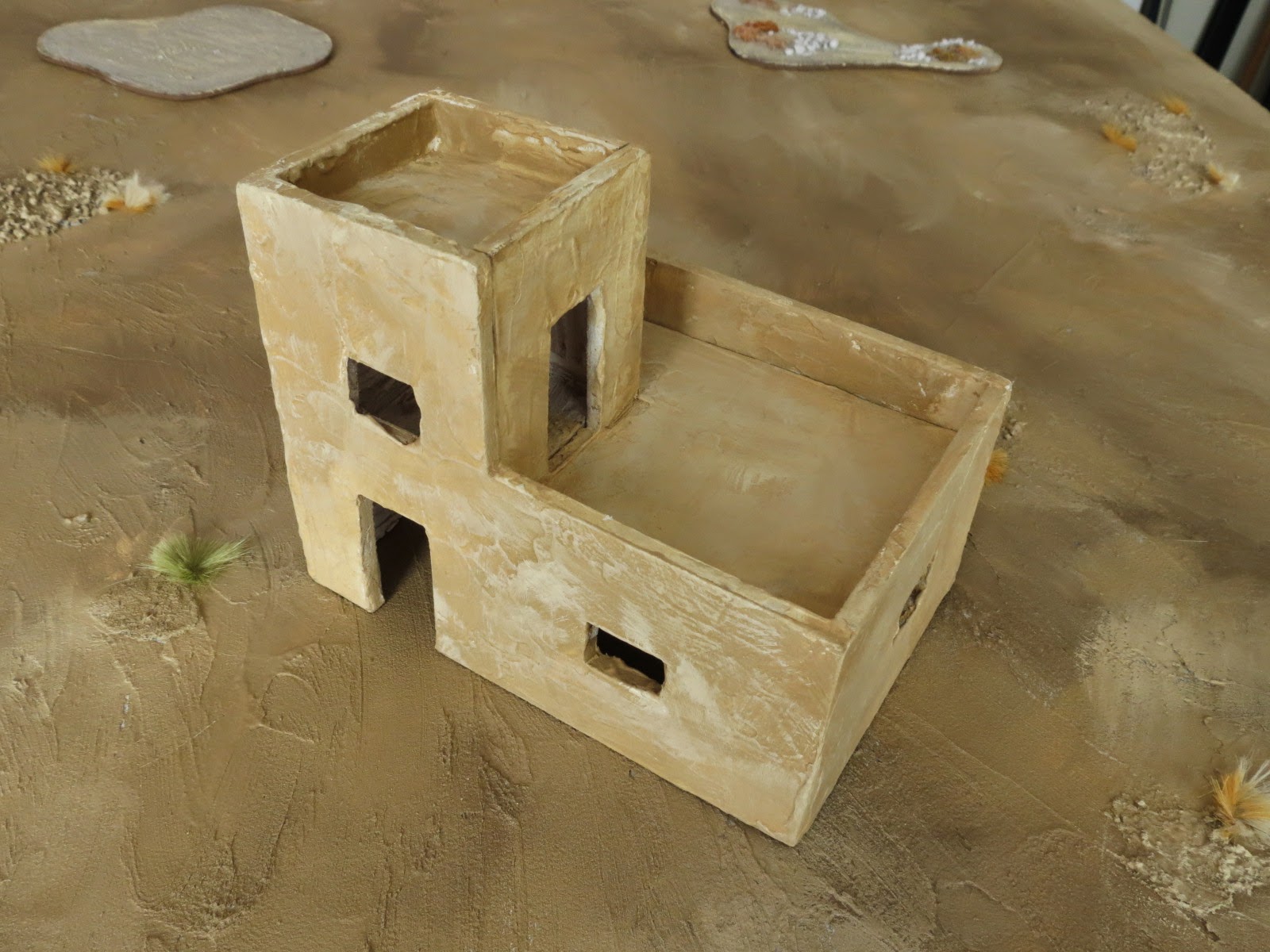 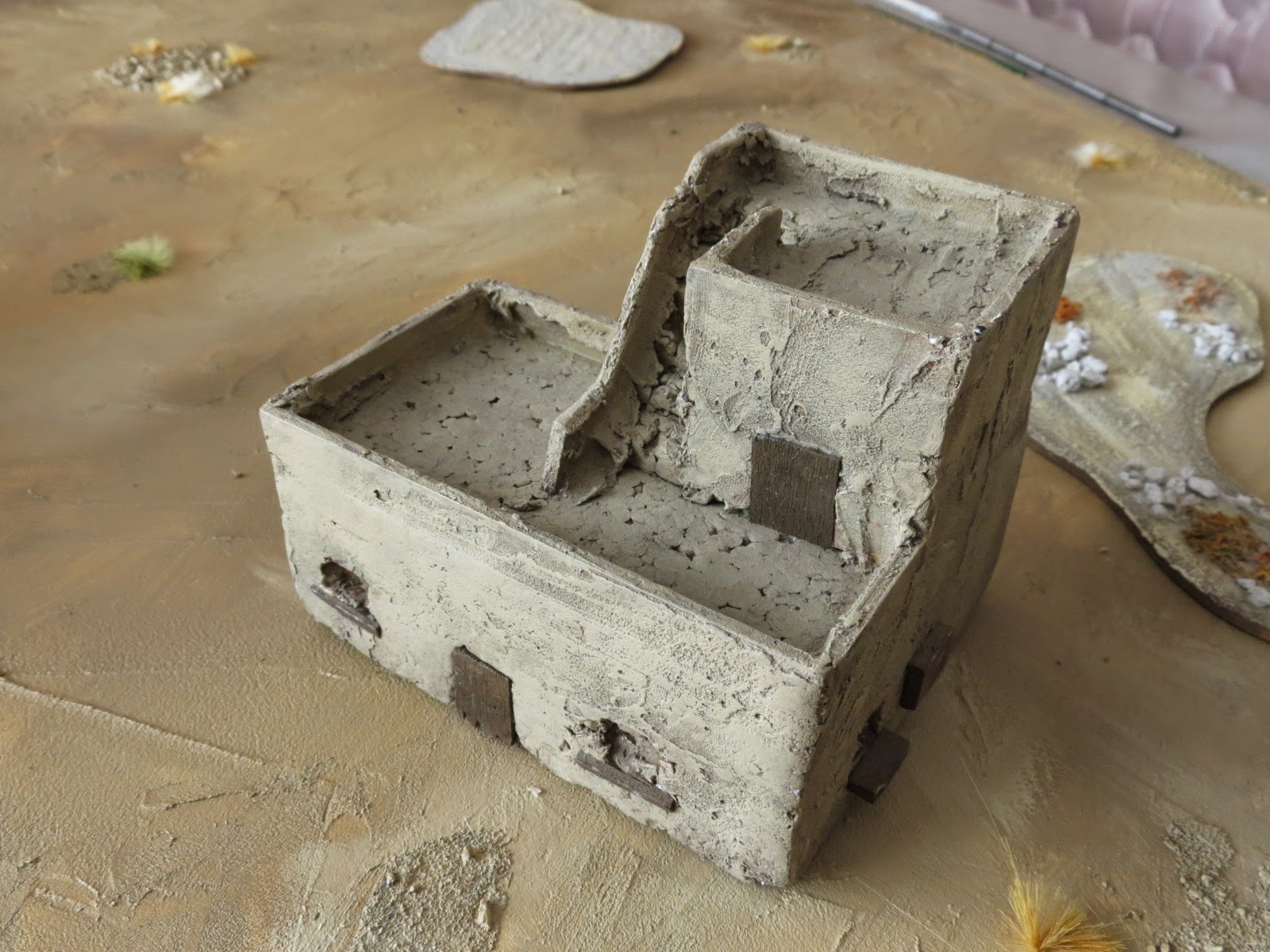 We also made some more desert themed buildings and painted them up to match, they came out very well I think.

Now I only have to start my Moors force in order to start playing on it !  ... will have to order them soon but still waiting for the Warlord and Camel mounted models to be released !

Well its been a long while since I last blogged - I blame being in the midst of the high summer months here,  I have been doing a lot of sailing at the moment - when the wind is good its spent racing in Trailer Yacht and Dinghy sailing boats 4 times a week and loving it.... so not much time for anything else !

Well the New Zealand Nationals has come about again this year in early April, its being held in Auckland this year which is a good road trip from Upper Hutt (about 7-8 hours)
I will be heading up with my brother Andrew and war-gaming mate John Fletcher this year, so should be fun. I was hoping to enter a Saga event but unfortunately this never eventuated, so its back to FOW for me after about 5 months of not playing a FOW game (Saga games instead) needless to say I am tad rusty.

The Flames of War tournaments that are on offer is Early War 1550 points and Late War 1450 points, which for me is rather funny point limits for both periods.

1550pts EW could easily encourage lists to be rather big and therefore will have some timeout issues .... meanwhile 1450pts LW is a some what smaller force and dropping 200-300pts off your normal list is quite hard, well very hard in fact.

Natcon is held over Easter Weekend with 3 days of gaming and some 8 games in total to be played, missions to yet be decided but with games each being Mobile, Defensive and Fair Fight types with no repeats in missions which is nice.


So I have decided to enter the Early War tournament this year and use a
list out of the new Barbarossa book - Soviet Tankovy. 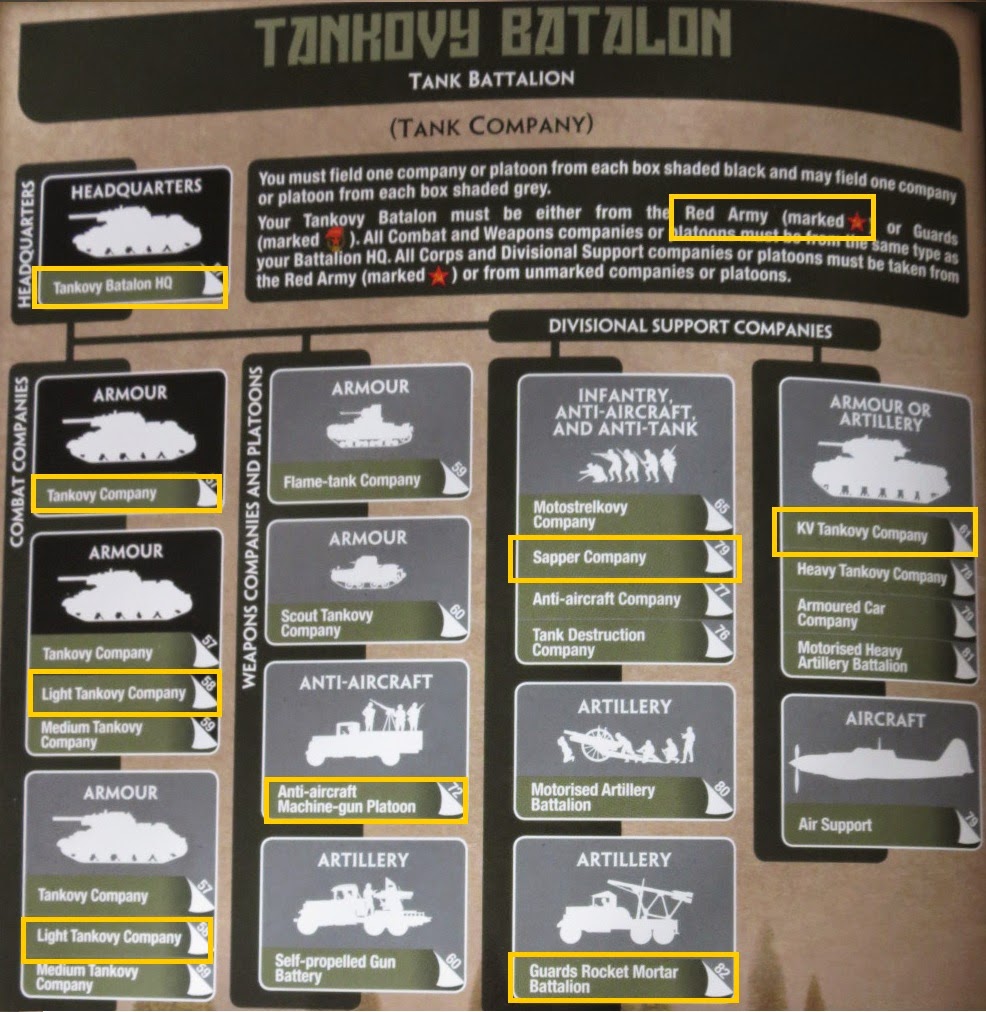 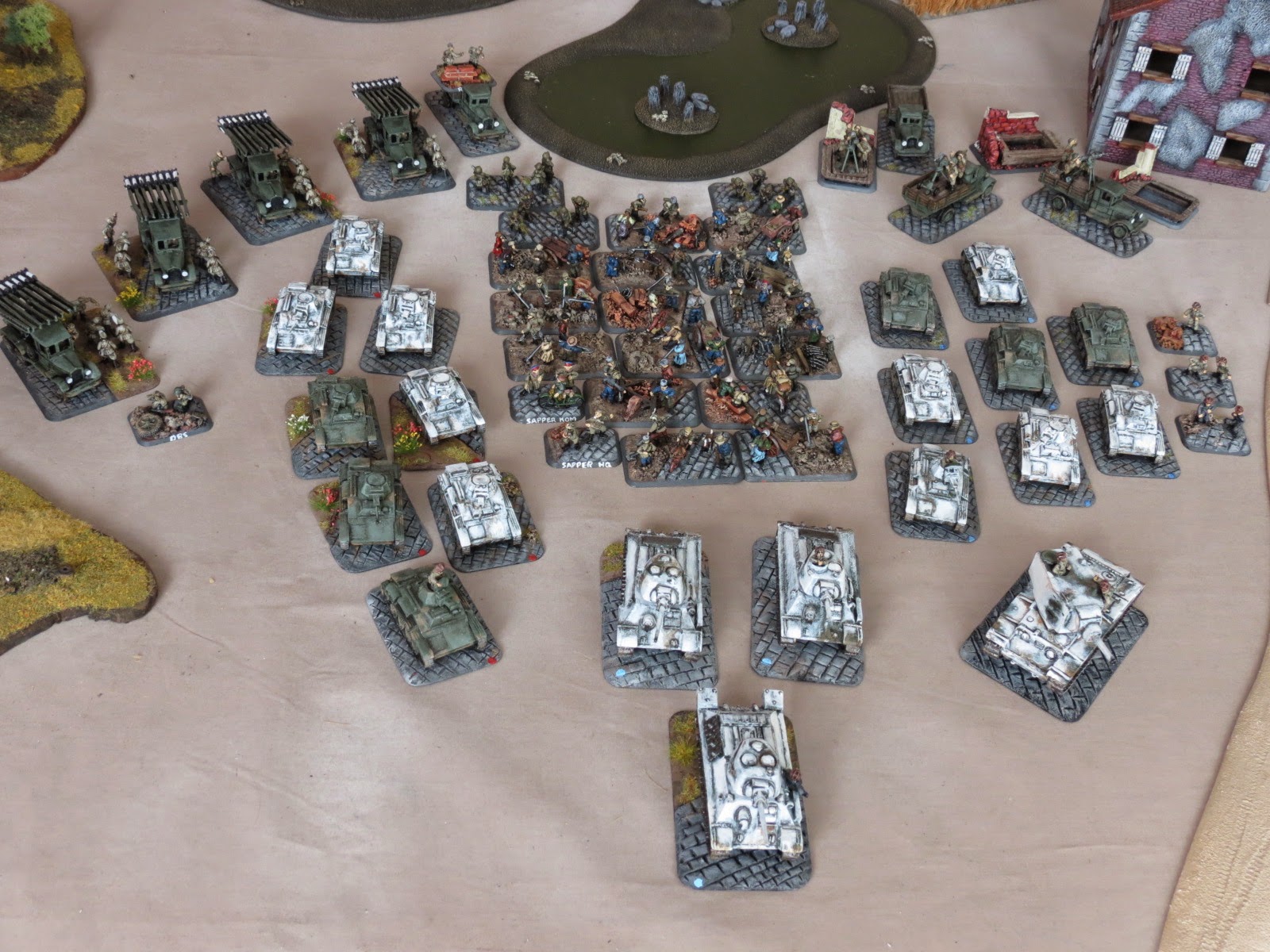 A more detailed look into the making of my army then :

The core of the army is the little 2 manned T-60 tanks, these will be work force of the list doing most of the grunt work, with front armour 2 they are quite a reasonable tank for early war, the gun is somewhat lacking being only AT5 with FP 5+ and a range of only 16" ... with hen and chicks on top of this, but still for only 195 points for 8 of them its still very good value I think. Way back in 2010 (using the Simon McBeth Early war PDF Lists). I took a T-60 army to Nationals once and did reasonably well with them, it was similar list to the one above but had a T-60 HQ tank and the ZIS-30 assault guns as well (which I scratch built myself as the models weren't available back then) they were and remain a formidable gun platform ! - pity you cant take them these days in the tankovy lists found in the Barbarossa book. 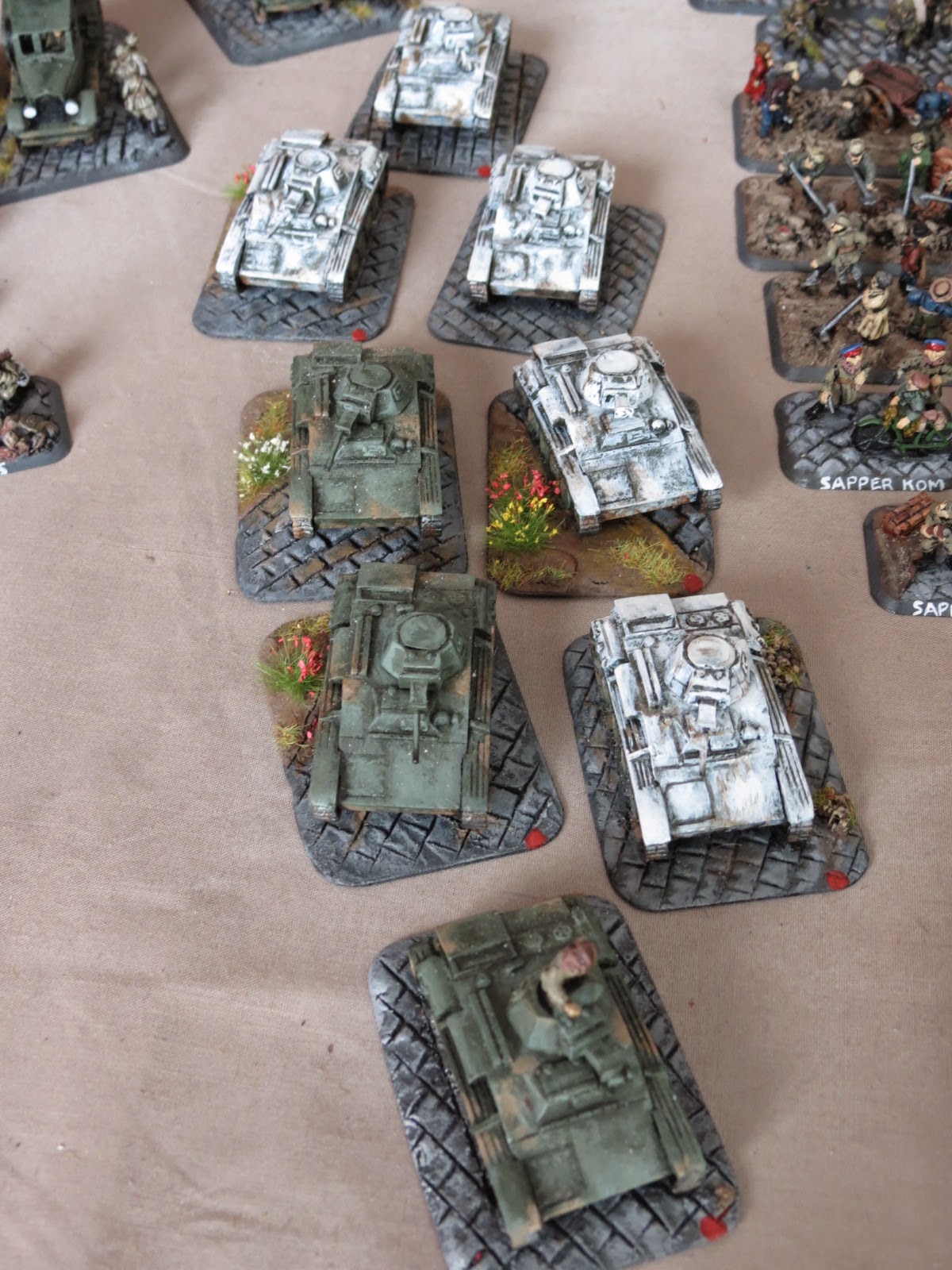 The two T-34's with front armour 6 and an AT 8 gun are very good and has to be kept safe, the version I am taking is the cheap one (obviously!) so with only 24" range, but with wide tracks I plan to advance up and then cross rough going if needed to keep safe 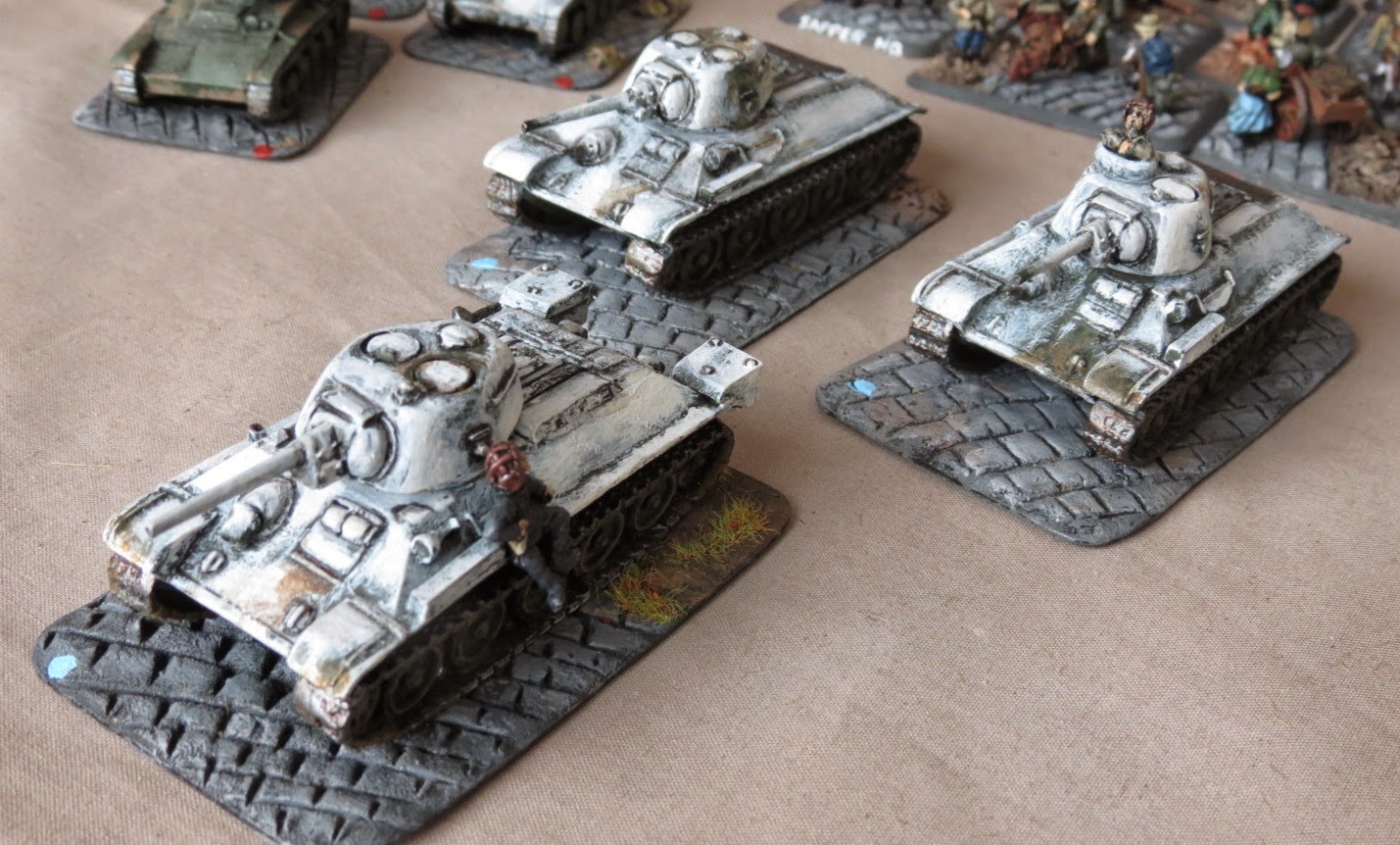 The single KV-2 in the list is a beast in Early War - front armour 8 with a ROF 1, AT10, FP 1+ bunker buster gun with range of 24" - you just have to hit your target and you pretty much kill it. The KV-2's job is to hold the objective and kill any nasty big tanks/guns.
Now some of you may be thinking why not take the KV-1 instead ? for the same points it has a ROF 2 gun, therefore it doesn't have the penalty of moving and shooting and adding the +1 to hit as the KV-2 does, this combined with hen and chicks rule as well - the KV-2 will not hit that much especially facing Vets . Simple answer is the KV-2 is my favorite tank of the WW2 therefore has to be in the list !  ... and it just looks way cool. 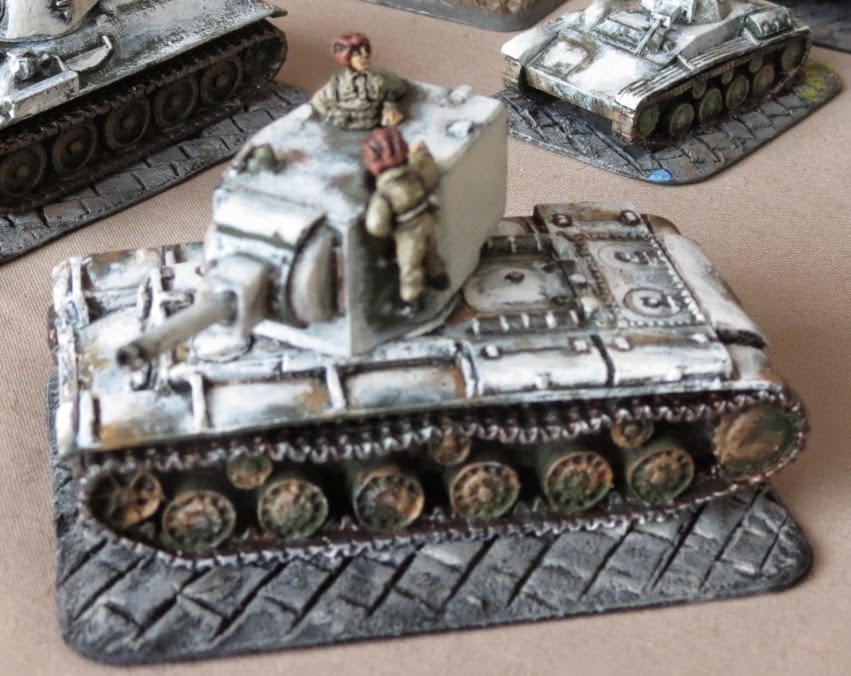 Once I saw the option for Unarmed Sappers in the Barbarossa book I had to take them !
For only 85 points you get to have a 19 stand sapper company with AT4 in assaults ...
I know right !! the only down side is that you have to re-roll your successful hits in combat and hitting with conscripts (5+) now that's not so difficult is it ?
I made up some unarmed sappers for my Mid War Militia army and has worked very well so will be good to see these figures in use again.

The Katyusha are good value for the points and being my only artillery template will come in quite handy for pinning purposes. The Dshk AA MG trucks will also be very handy as German air support are a plenty in Early war so will have there work cut out for them. 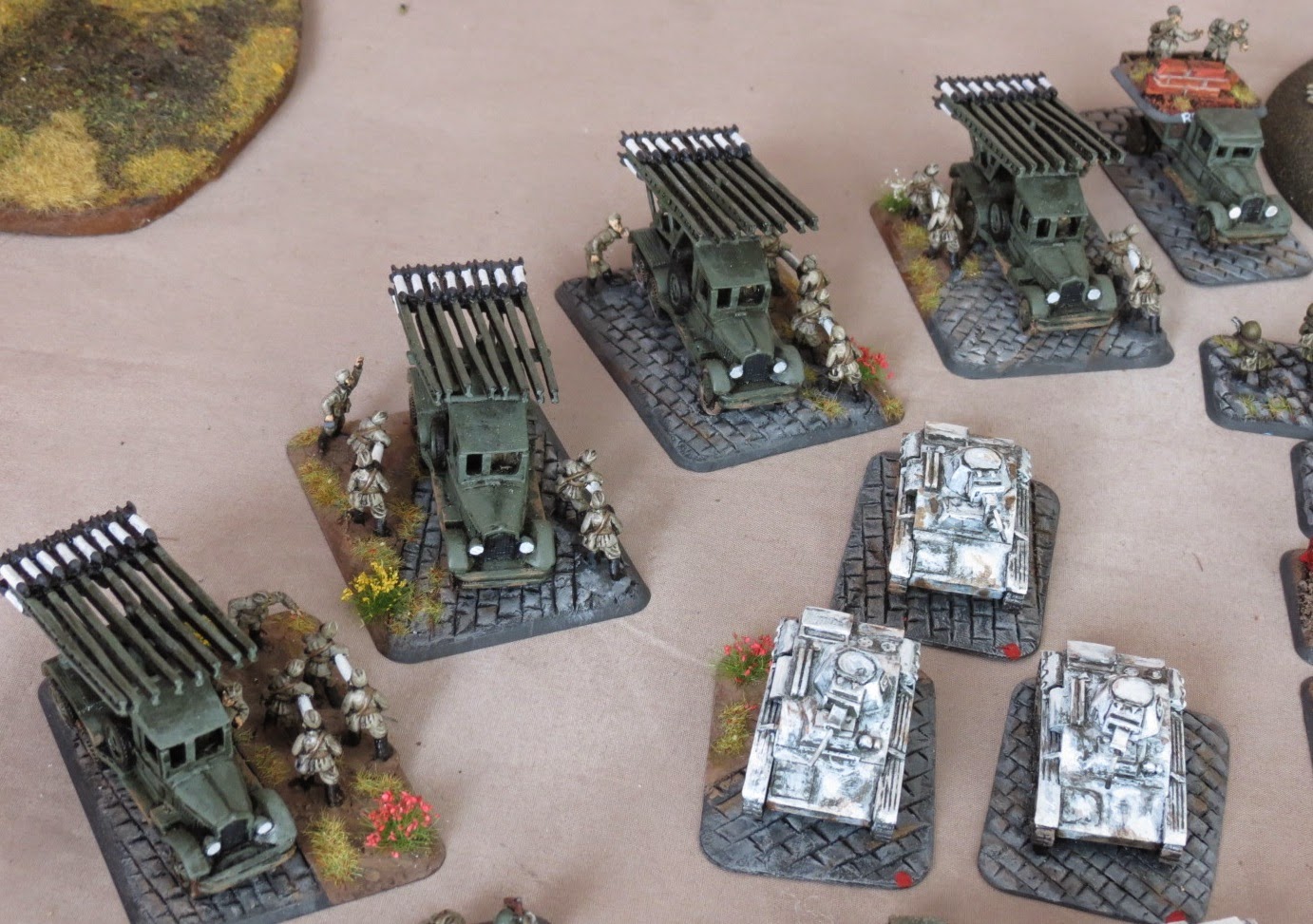 Hopefully I do quite well with the list, but it should be a fun list to work with and that's the important thing these days. I did come up with a formidable EW Strelkovy list with lots of 45mm AT and 76mm regimental guns with unarmed sappers a plenty, backed up with a KV-2 and 37mm AA guns (total of 10 platoons with air support)  ... but with wave attack and placing down a horde of infantry and then you have the saving throws a plenty I decided against this ... with 8 games its easier with a tank list - should be a good long weekend, will also be bringing up some board games with us so will have some long nights ahead no doubt.

Any thoughts and comments welcome