Merry Christmas New Years and all that, I have been on holiday break for a few weeks spending time sailing, kayaking, mountain biking, swimming and other such summer activities so good to now be back to work for a rest at least.  In that break I finally got around to typing up my AAR for the siege castle mission (home made scenario) my brother Andy and i had played last month. see link here for a revisit of the mission brief.

Andy was the attacker and keeping with the theme he put forth a 6 point Crusaders force consisting of his Warlord on foot, one point of Hearthguard (Knights) on foot, 2 points of Foot Warriors, one point of Pilgrim Levy and some Fanatical Pilgrims (monks)

To oppose the Crusaders I put up a Moorish band of Warriors, but had only with 4 points (as I had big nasty walls to hide behind - time will tell if it is enough) My Warlord is always mounted (rather annoying) so I also had a unit of mounted Hearthguard equipped with javelins, two points of Warriors and some Levy Bowmen - I choose bows over Levy crossbows as spending time resting removing fatigue on walls will suck up a lot of uncommon dice.

Andy placed his HG unit with the battering ram (good option) in the middle of the road opposite the castle gate, with Warriors to right side and Monks and pilgrims on my left side and xbow warriors on my right side. The Monks, Pilgrims and one Warrior unit each had ladders between them. 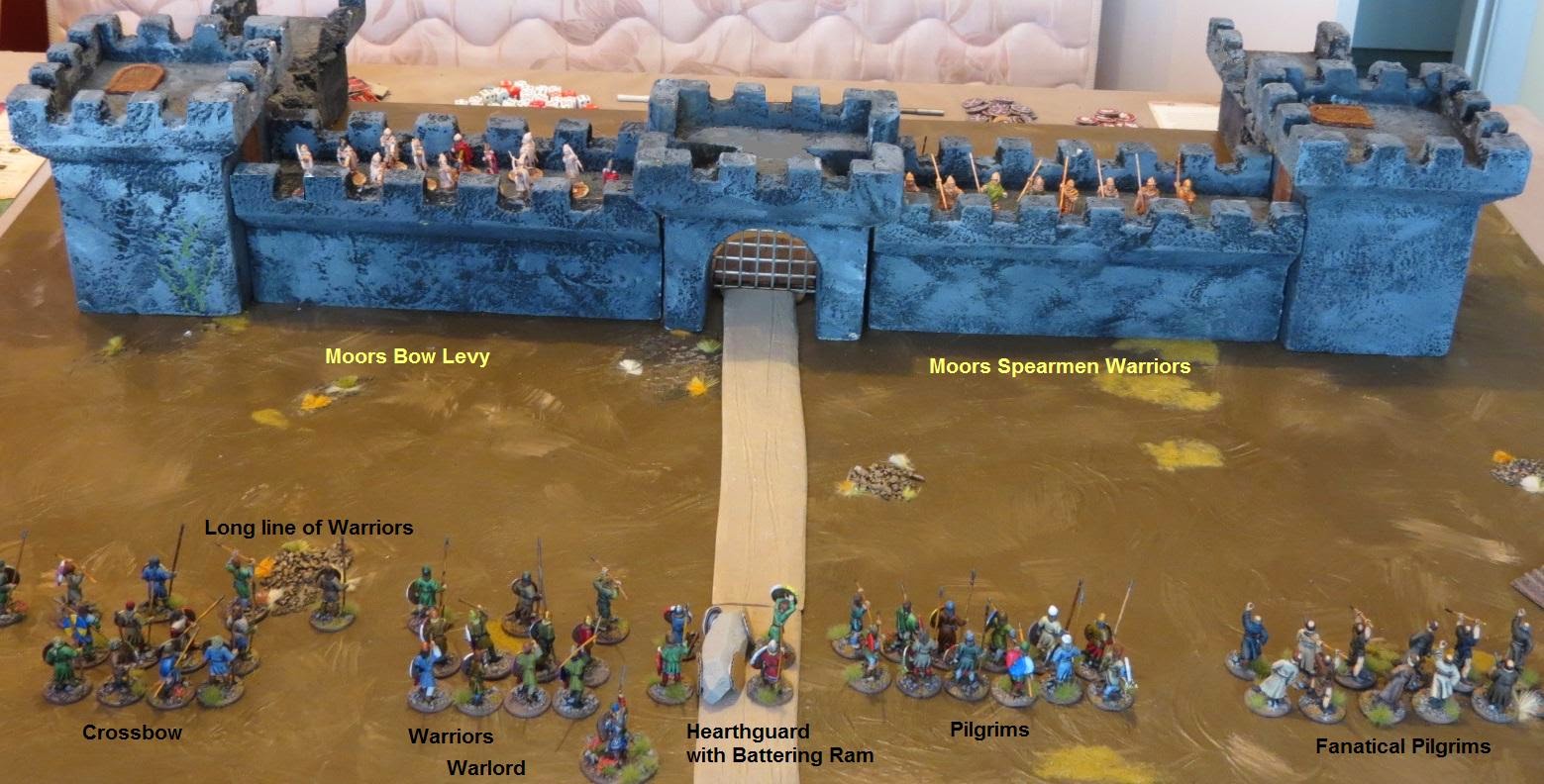 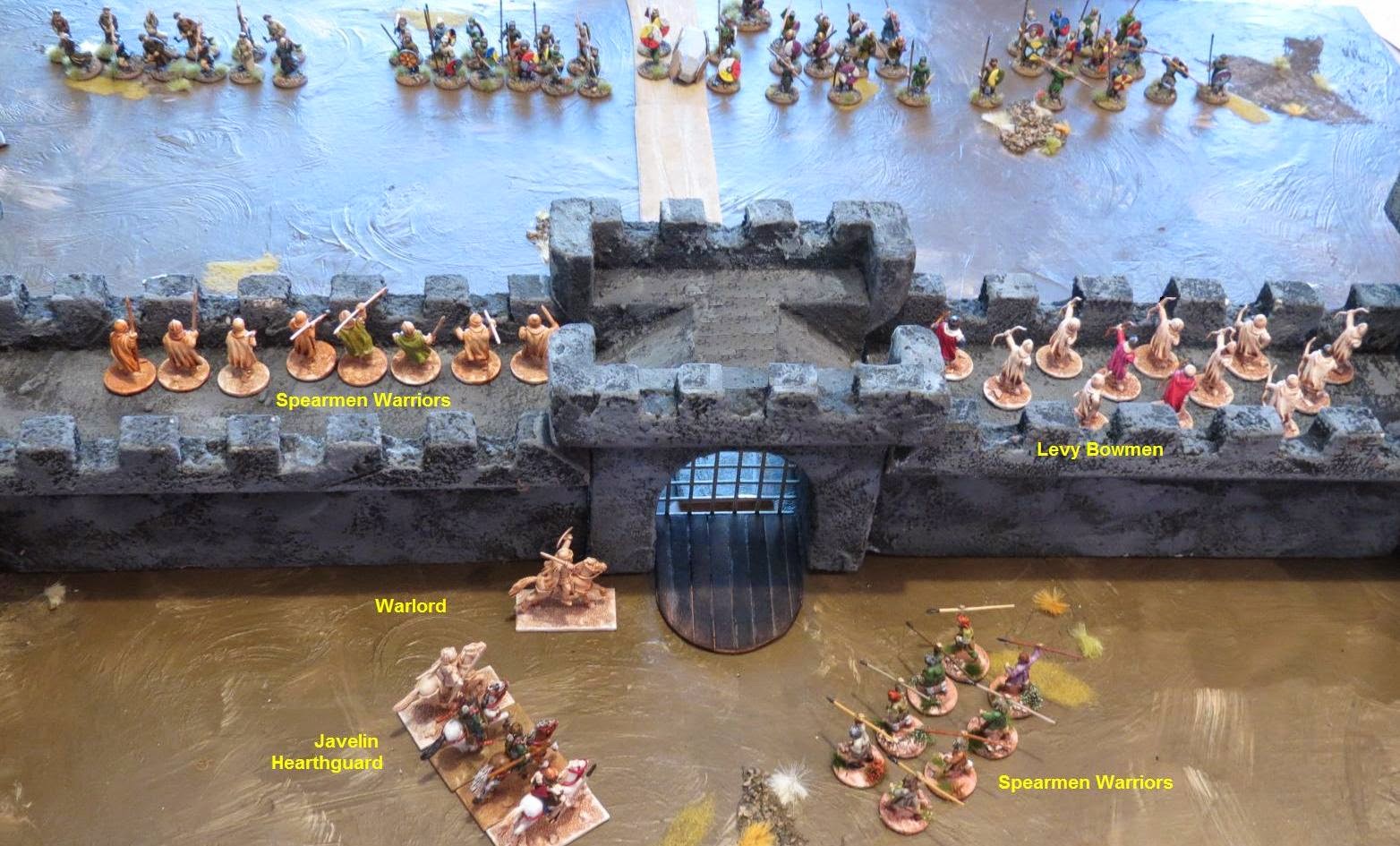 TURN 1
Crusaders: - Andy has the first turn as its fitting to have the attacker have the initiative for this mission. Andy gets his Temperance Skill up and ready, also has some good dice and places dice into the Great city skill, in the orders phase also uses the Taking the Cross skill whereupon his foot units are allowed to move an additional VS making their move 8" (very handy skill to have in this mission as it allows his ladder troops to assault the walls in turn 2) . He then moves the Monks and Pilgrims using the rare dice in pilgrims ability. He also moves his Knights and Warriors up as well. He then places dice into Great City skill. 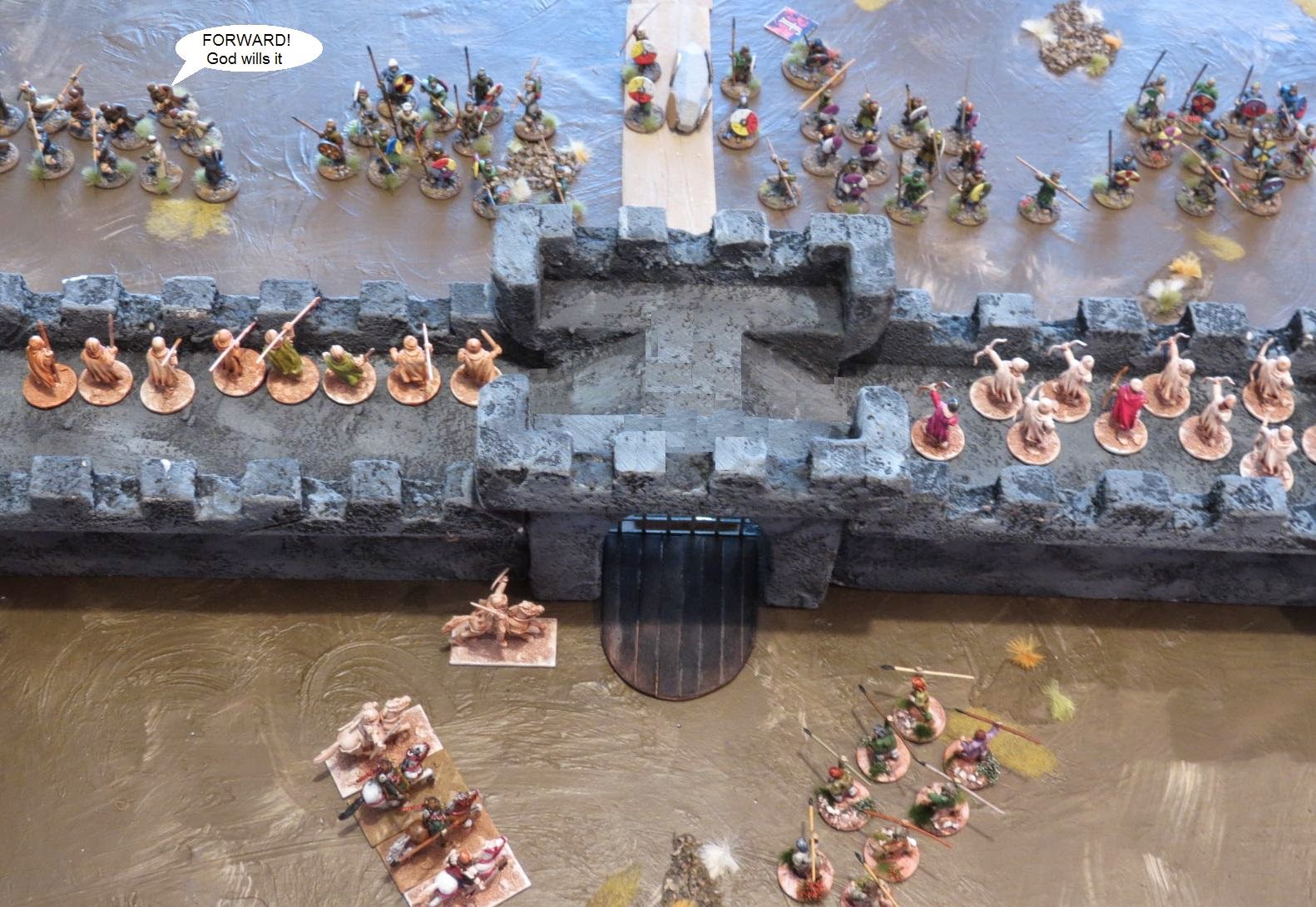 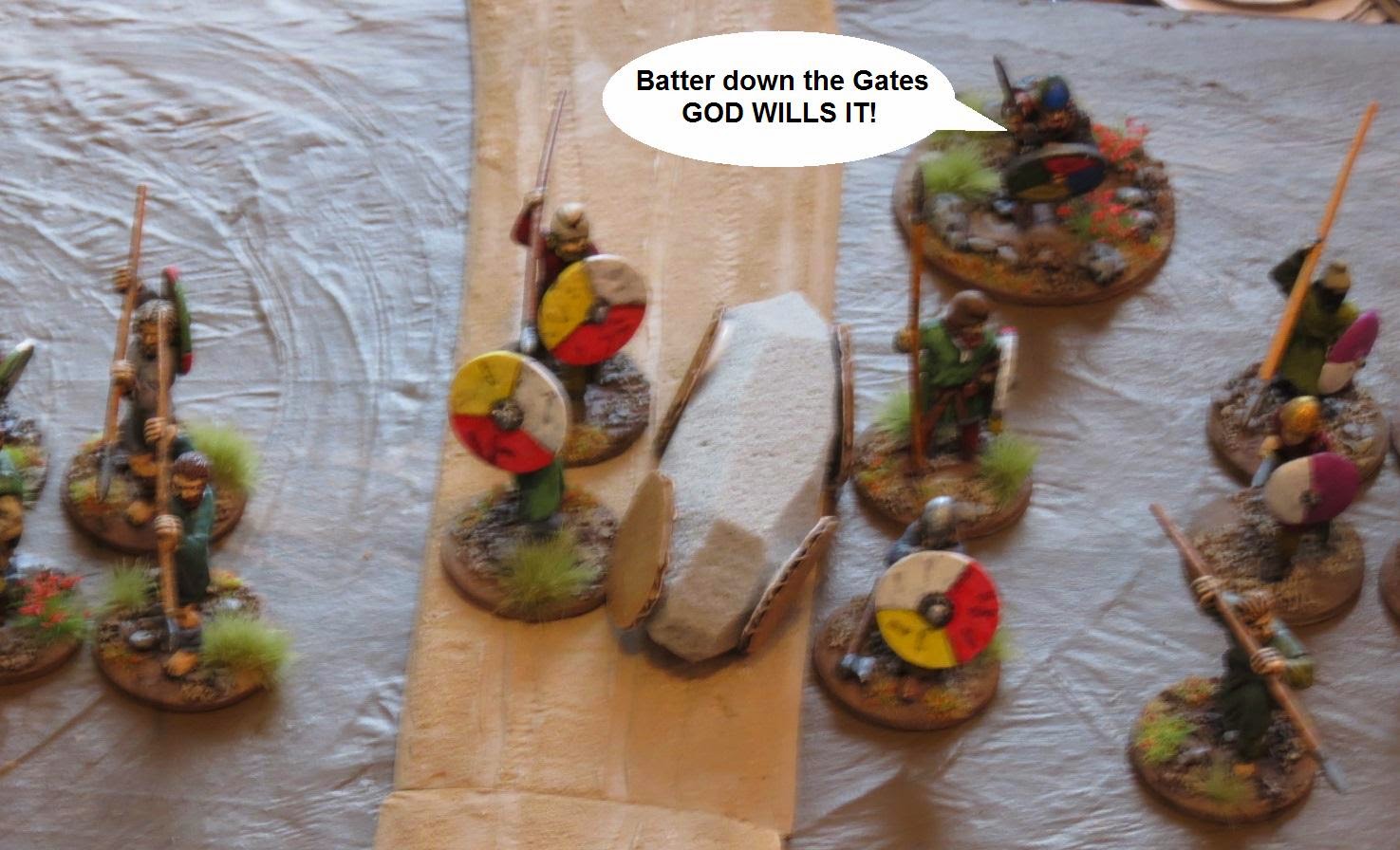 Moors: - My Warlord yells up to the bowmen, but they hardly need encouragement as they loose their arrows into some warriors, raining down a hail of death and kill 4 of them (not a bad start) I then switch targets to fire at the crossbow warriors but due to the Great city skill I only kill one of them. Also place up Friendly fire skill

TURN 2
Crusaders: - Andy now gets his Justice Virtue up and running with only 2 dice used.  He puts in place his Peasants Crusade orders skill, where upon all his Levy now generate melee attack dice as if they were Warriors (nasty) He activates his Pilgrims to shoot their short range javelins at my warriors on the wall but due to Friendly Fire skill they inflict two hits which is divided among us both so we both loose one casualty each. 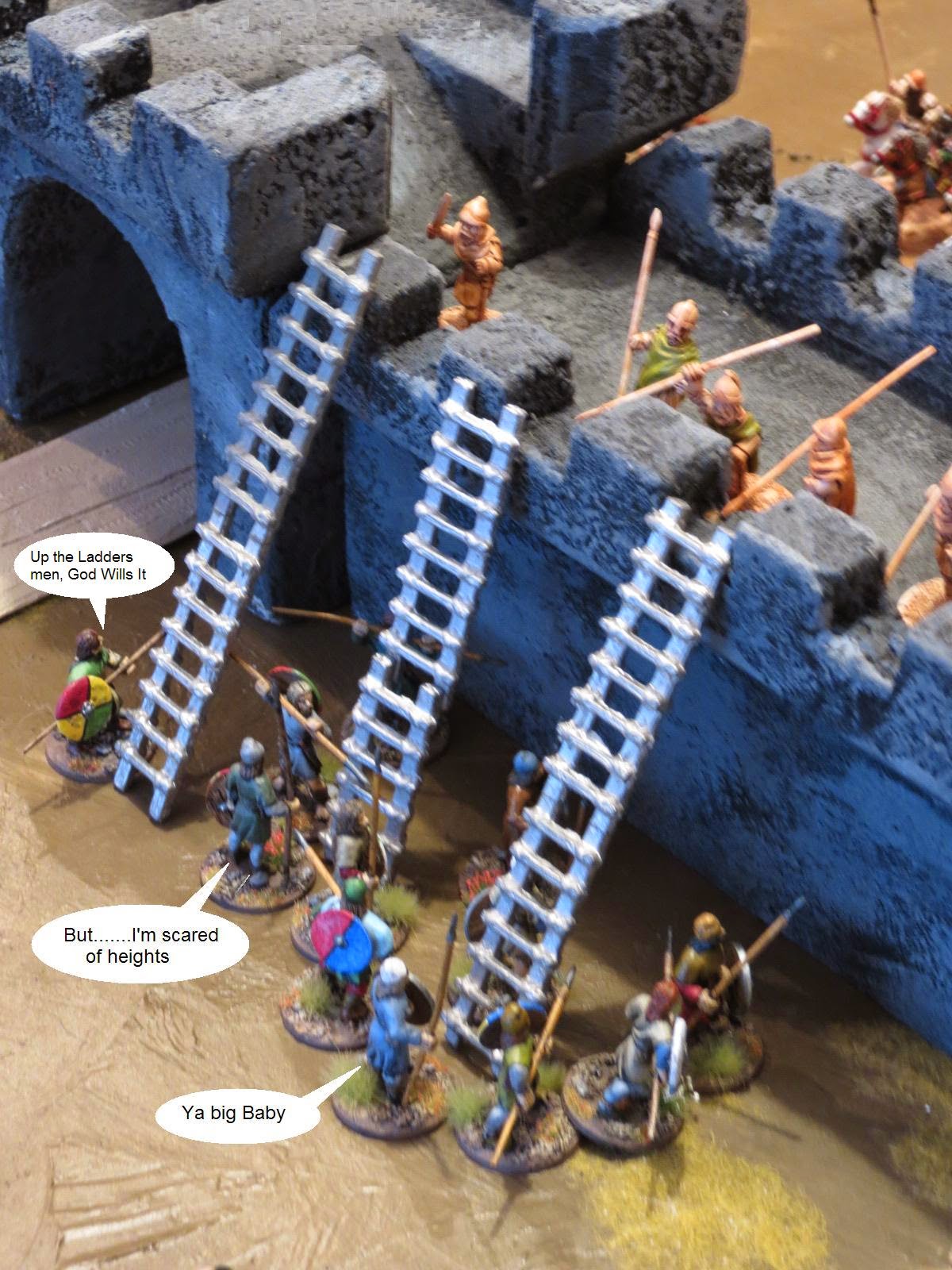 The pilgrims infuriated by this rush forward and place ladders along the wall and climb to assault. With their fighting prowess now that of warriors and my troops behind heavy cover  we both only loose two models each. the Pilgrims retreat back down the ladders. Meanwhile the crossbows give covering fire but due to the protecting ramparts they miss their targets. The Knights are moving the Ram ever closer to the gate! 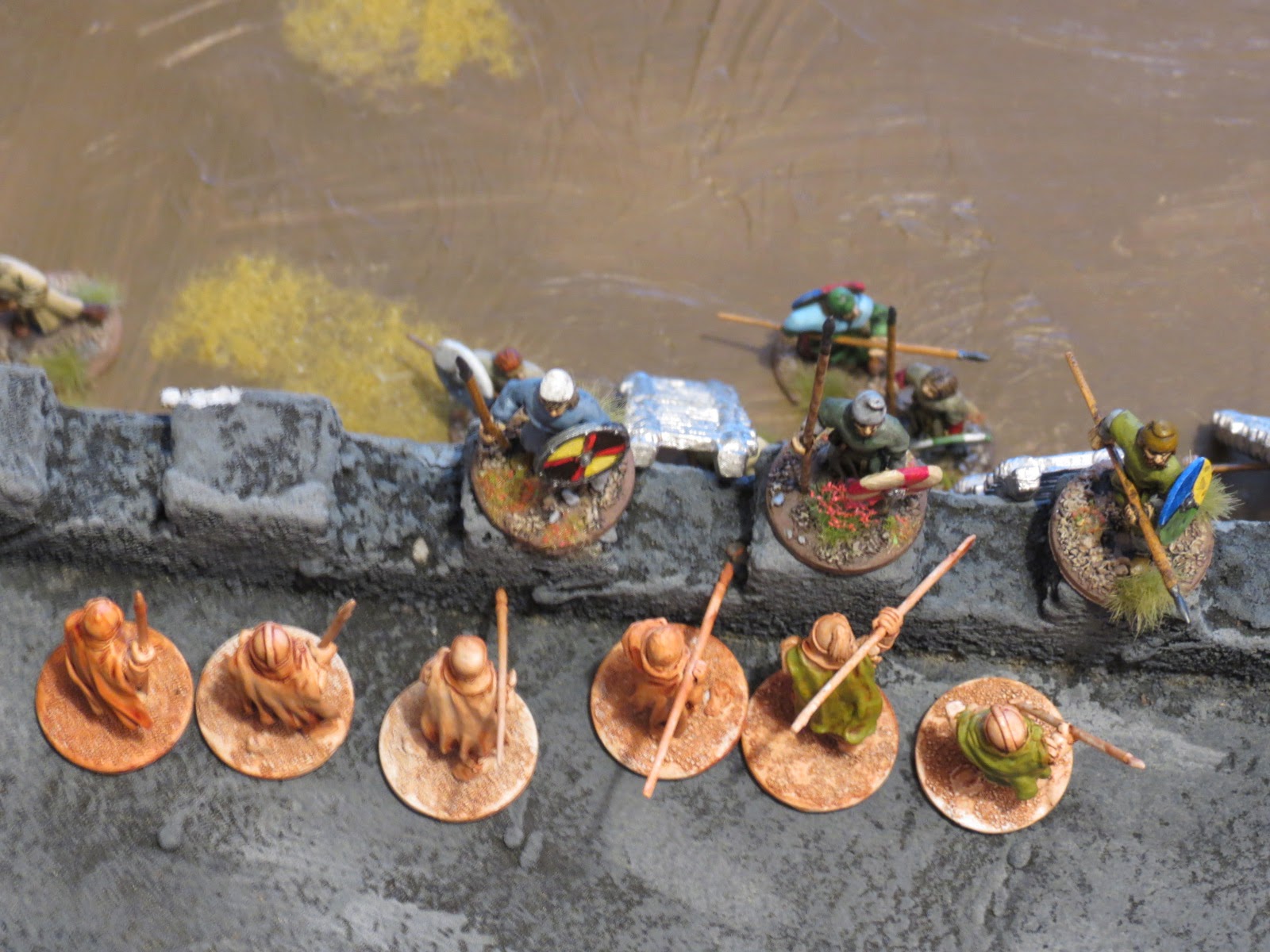 Moors: - Corruption skill in place and also put one rare dice into Betrayal (will get the other half next turn) The Friendly fire skill worked so well last turn I put a dice in it to annoy Andy. I also put in place Impaling Spears ready for Andy's impending melee. I then activate my bowmen for another 2 kills to some warriors. 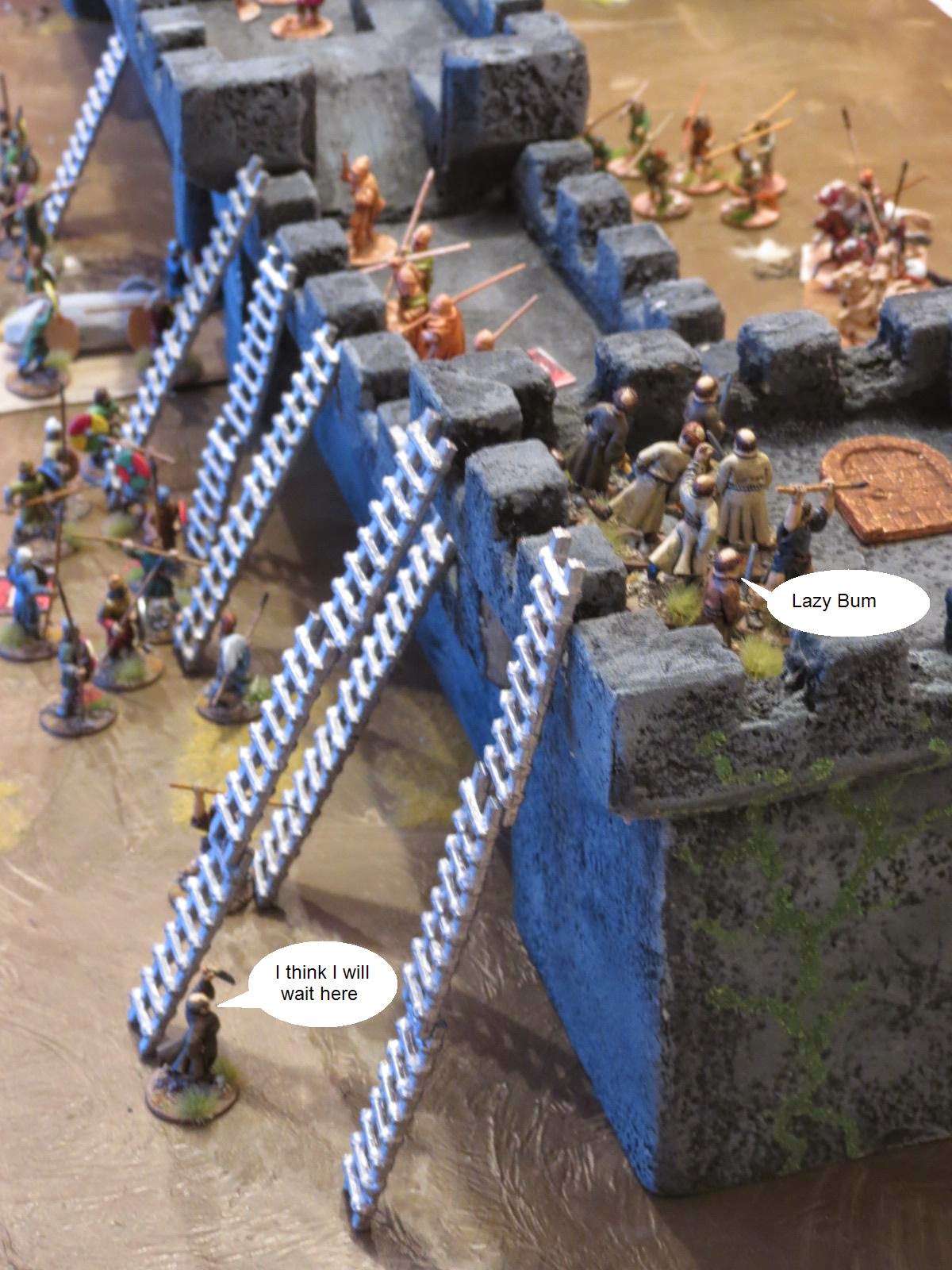 TURN 3
Crusaders: - Whenever Andy is using his Welsh dice (as being the case now) he has a knack of rolling rare dice (a dragon) when he needs it ! and this time was no exception. Andy decides only to roll one Saga dice for his Virtues needing a dragon for the final remaining Fortitude Virtue to be ready .... and of course he gets it .. Typical ! - he wasn't even that fused but pleased all the same !
After that injustice my Corruption skill gains me the Rare dice I was looking for the Betrayal skill. But to make matters worse the skill allows the opponent to roll an additional dice and Andy rolls another Dragon ...... lucky so and so.... mutter mutter 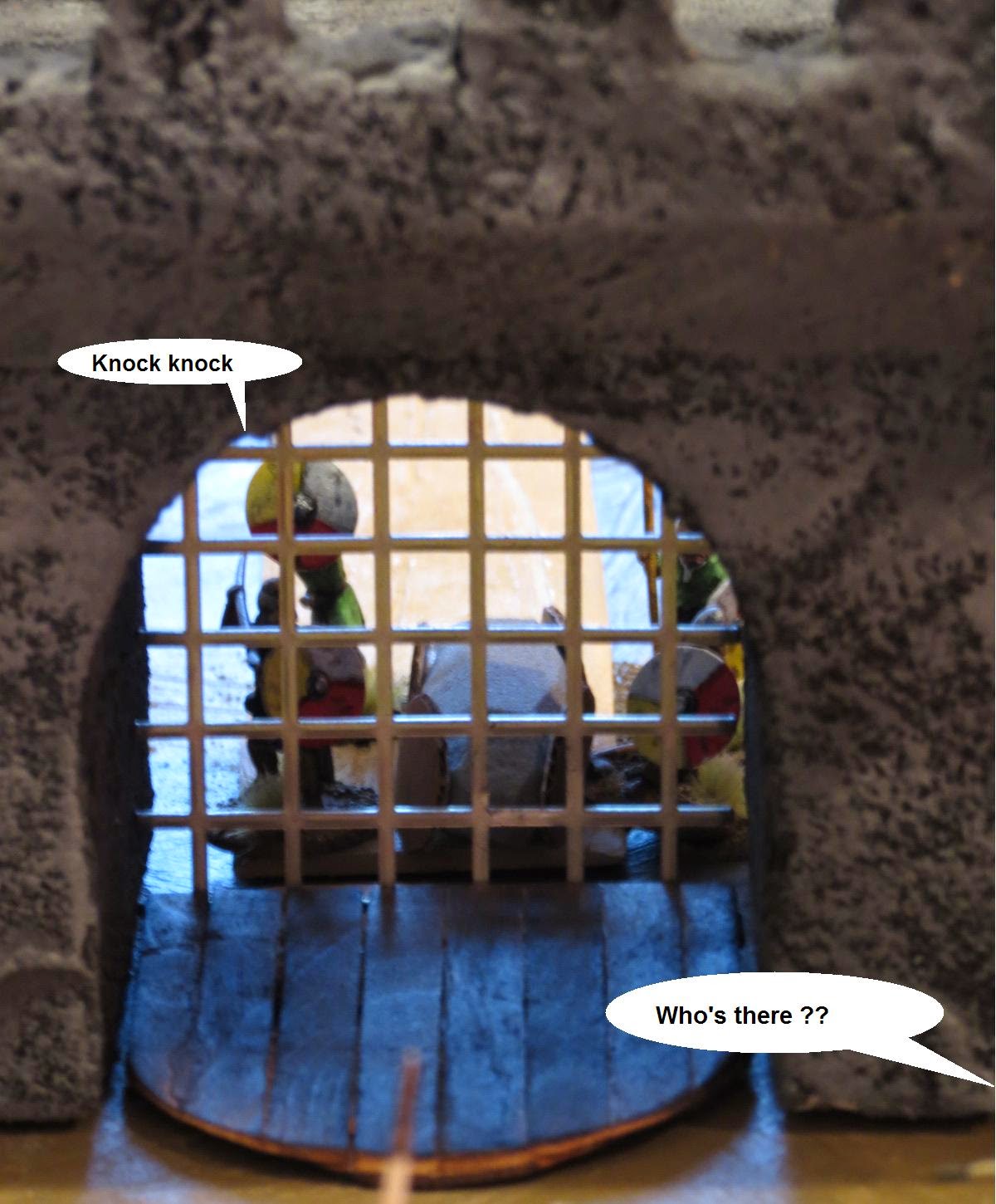 So the Mad Monks stop praying for a few seconds and raise some very long ladders up to the tower on my left side with no opposition to stop them so they clamber into the tower.
The knights move the ram to the gate and manage to weaken the outer door by succeeding their attack role. The Pilgrims have time to rest and then once again climb up the ladders to assault my warriors, but find heavy resistance due to my Impaling spears skill so after one loss each side, the pilgrims once again descend down. But with Andys Holy land skill in place all there fatigue is removed at the end of melee step 8.


The Knights are once again bashing at the gate and have now severely weakened it somewhat ! Andy's crossbows fire again but amusingly they hit one of their own warriors again (full on laughing at Andy - love the friendly fire skill) The small unit of 4 Warriors on the right side find some courage and raise ladders to assault the Levy bowmen and succeed in killing 2 of them making them retreat further along the wall. Andy now has troops on the walls. 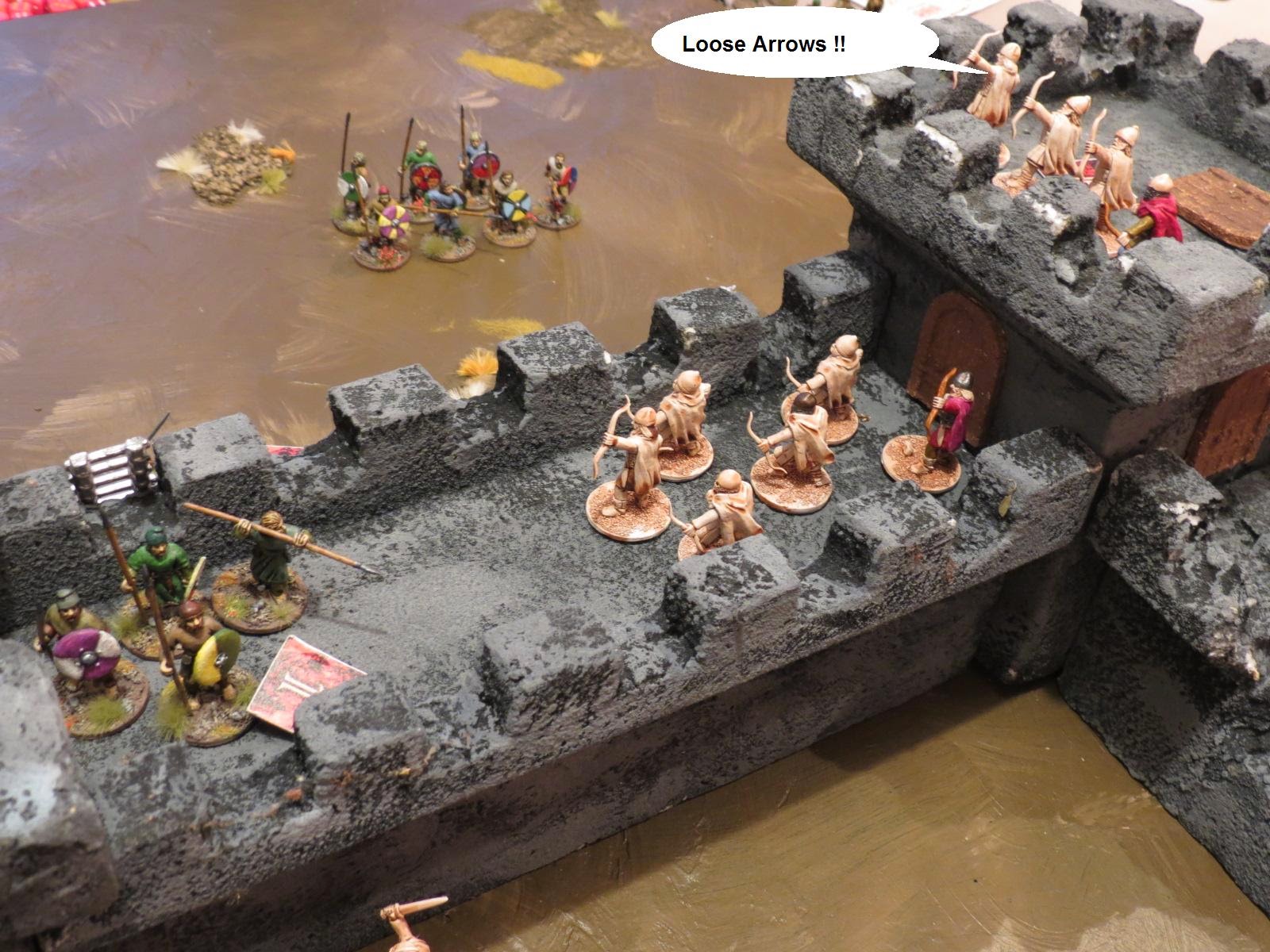 Moors: - I activate Andy's crossbowmen using the betrayal skill and shoot some of his warriors in the back killing 2 of them. I also activate my Levy bowmen and shoot the warriors  but being only inches away they cant hit a barn door.

TURN 4
Crusaders: - The 4 warriors on the right rush into melee with the bowmen again killing another 2 for a loss of one.  Another small 4 man unit climbs the ladders as well on the right side. Andy then activates his siege skill where upon his now more loyal crossbow unit fires into the bow but miss (so gains a fatigue)  The 3 warriors charge into and kill one of my bowmen who now retreat in earnest onto the tower itself. The Monks charge into my warriors on the left wall causing 2 to fall for a loss of one, the warriors decide to retreat down to the courtyard level having only 2 left !  Andy now controls both walls . The Knights decide to join the party and succeed in breaking down the gate. 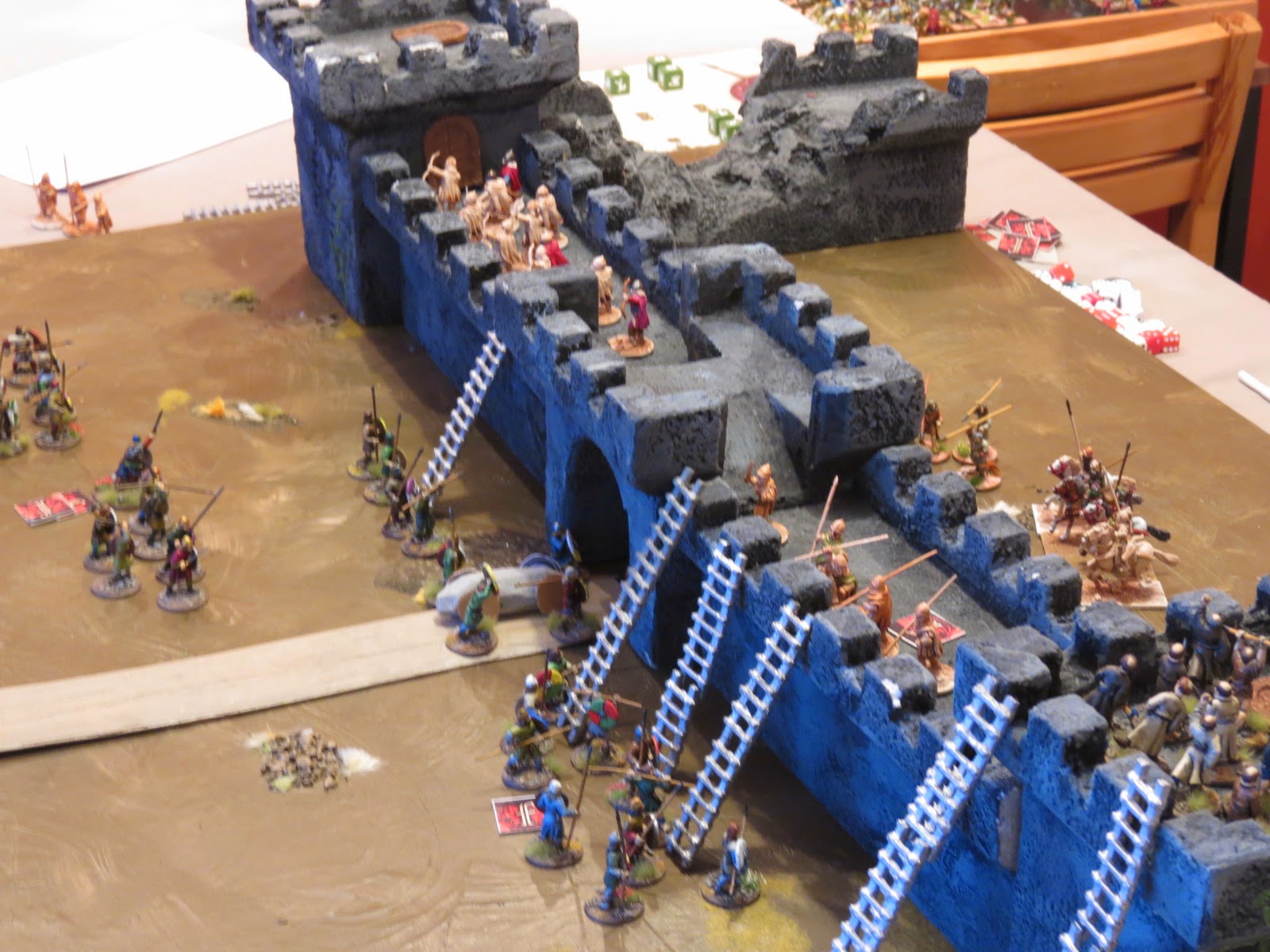 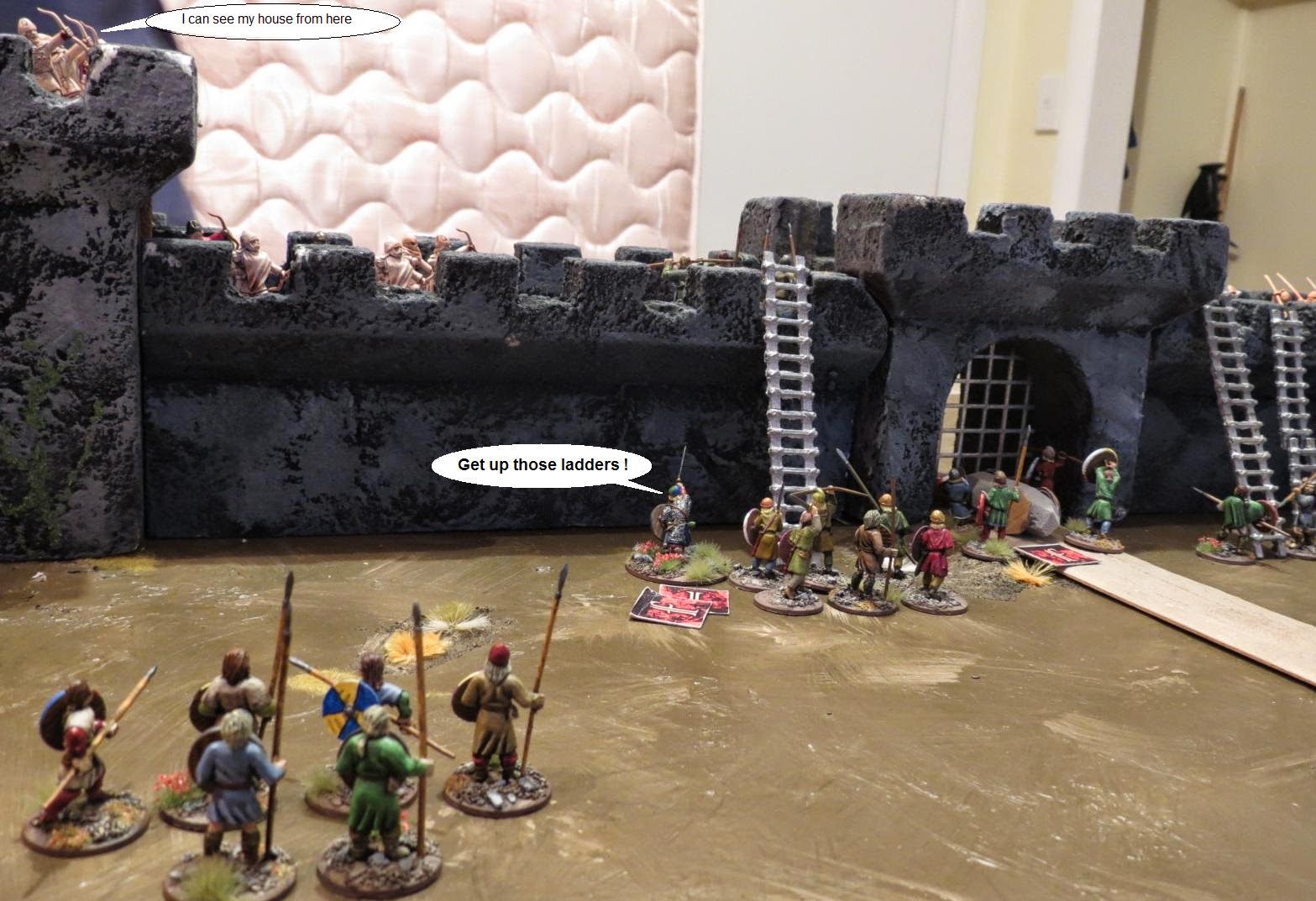 Moors: - I arrange my battle-board for the forthcoming melee with the Knights placing up some useful skills, My Warlord and Hearthguard move around and shoot some javelins at some warriors on the walls killing one. 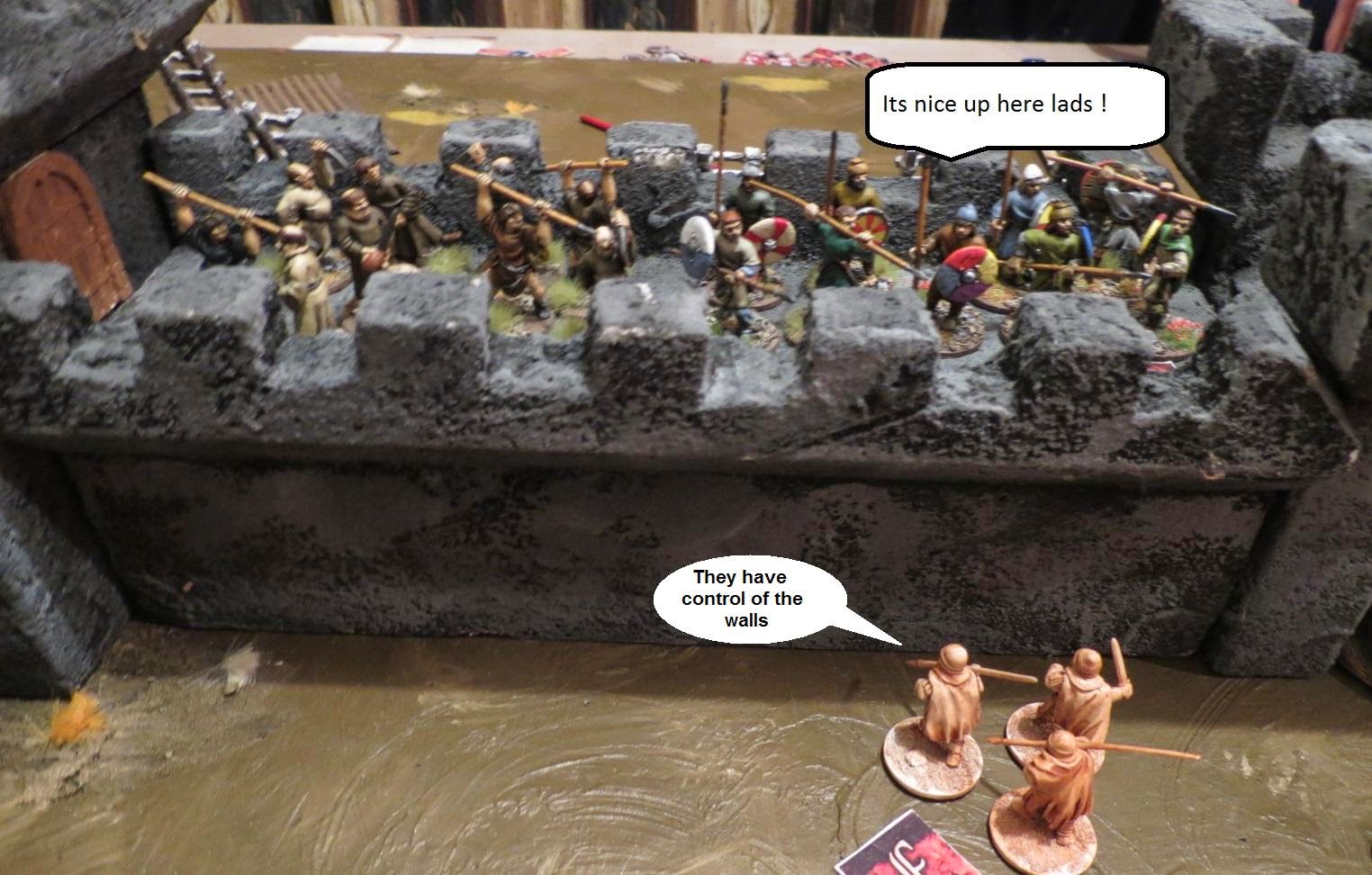 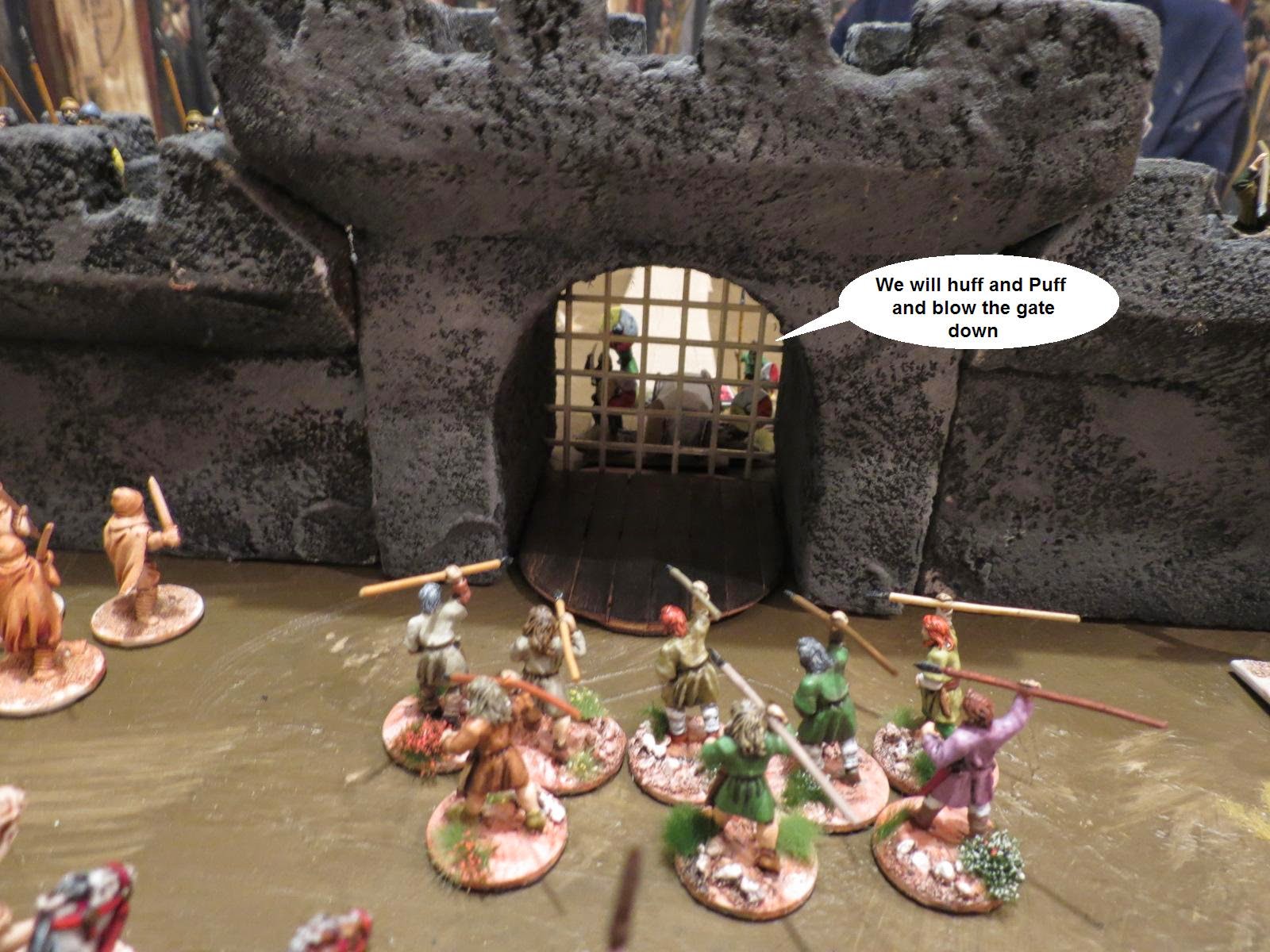 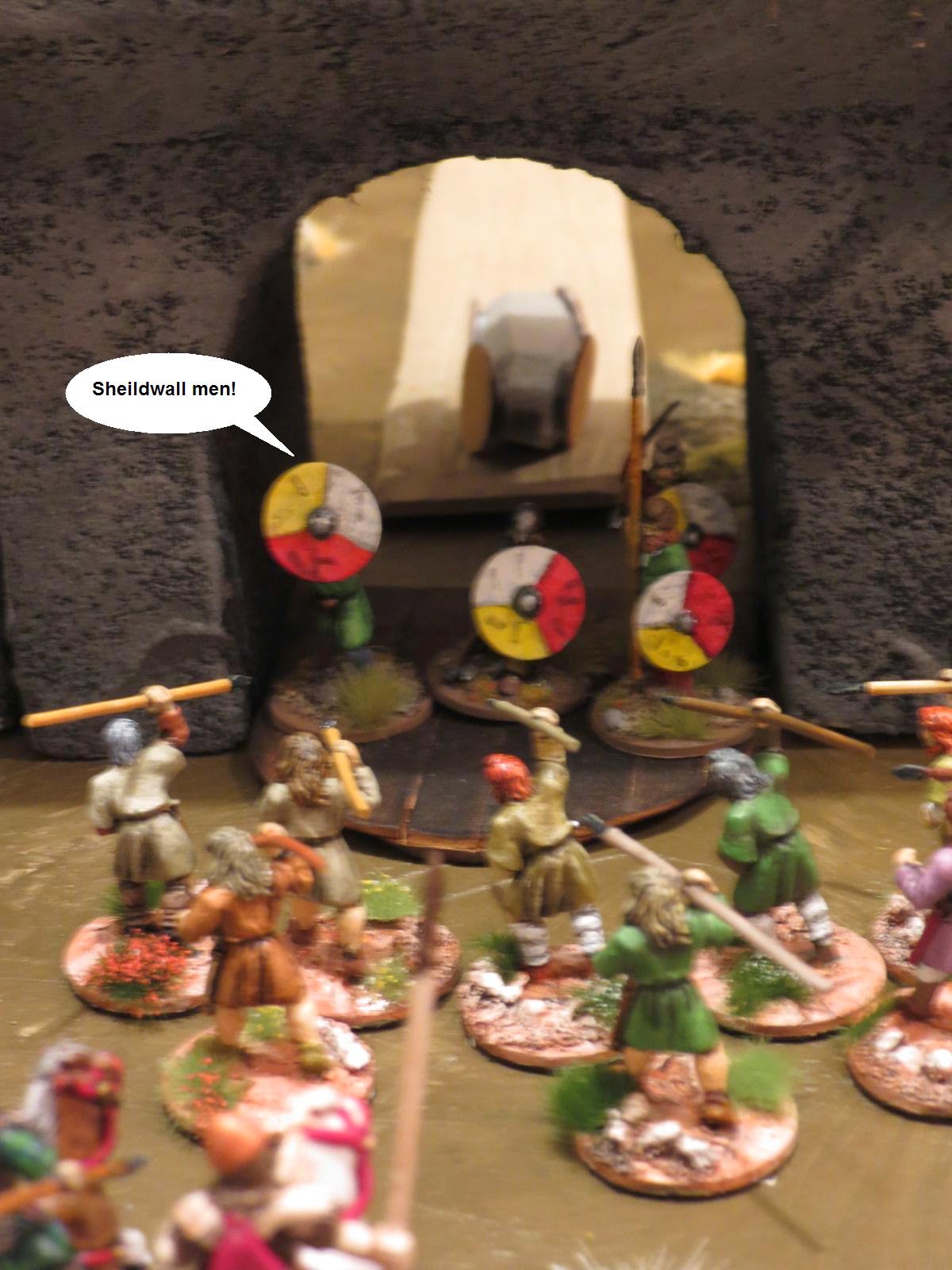 TURN 5
Crusaders: - With a rare dice both the Monks and Pilgrims move down off the walls to be on the courtyard. The Knights rest but the charge into my fresh 8 man warrior unit - I use my melee reaction skill Dance with spears where upon all units have to half their attack dice but gain the number of defense dice equal to their attack dice, so Andy's attack dice go from 8 to 4 but also gains 4 Defense Dice - this makes Andy use his Dorylaeum skill so he jumps back up to 8 dice. But I have another trick up my sleeve and use my Impaling spears skill where upon Andy must choose to either give me a +2 to hit with all my attack dice OR halve his attack dice...... he decides the latter..... after all that we only inflict one kill each as we have a heap of defense dice.  The Monks charge into my 2 man warrior unit and wipe them out. 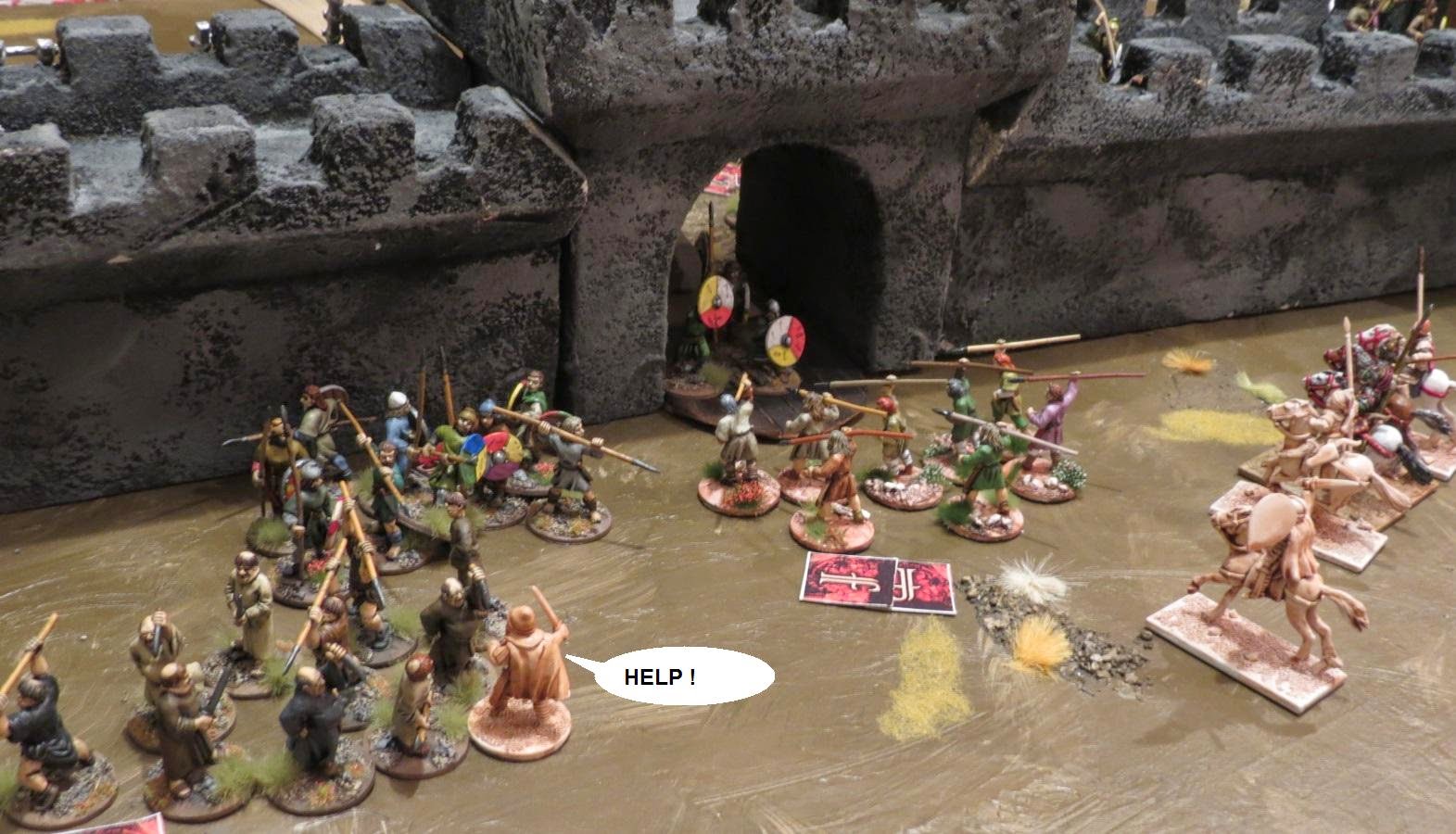 Moors:- I rest my warriors and place my corruption skill and Dance with spears skill. My Warlord now infuriated by the praying monks charges into them and kills 2 of them. 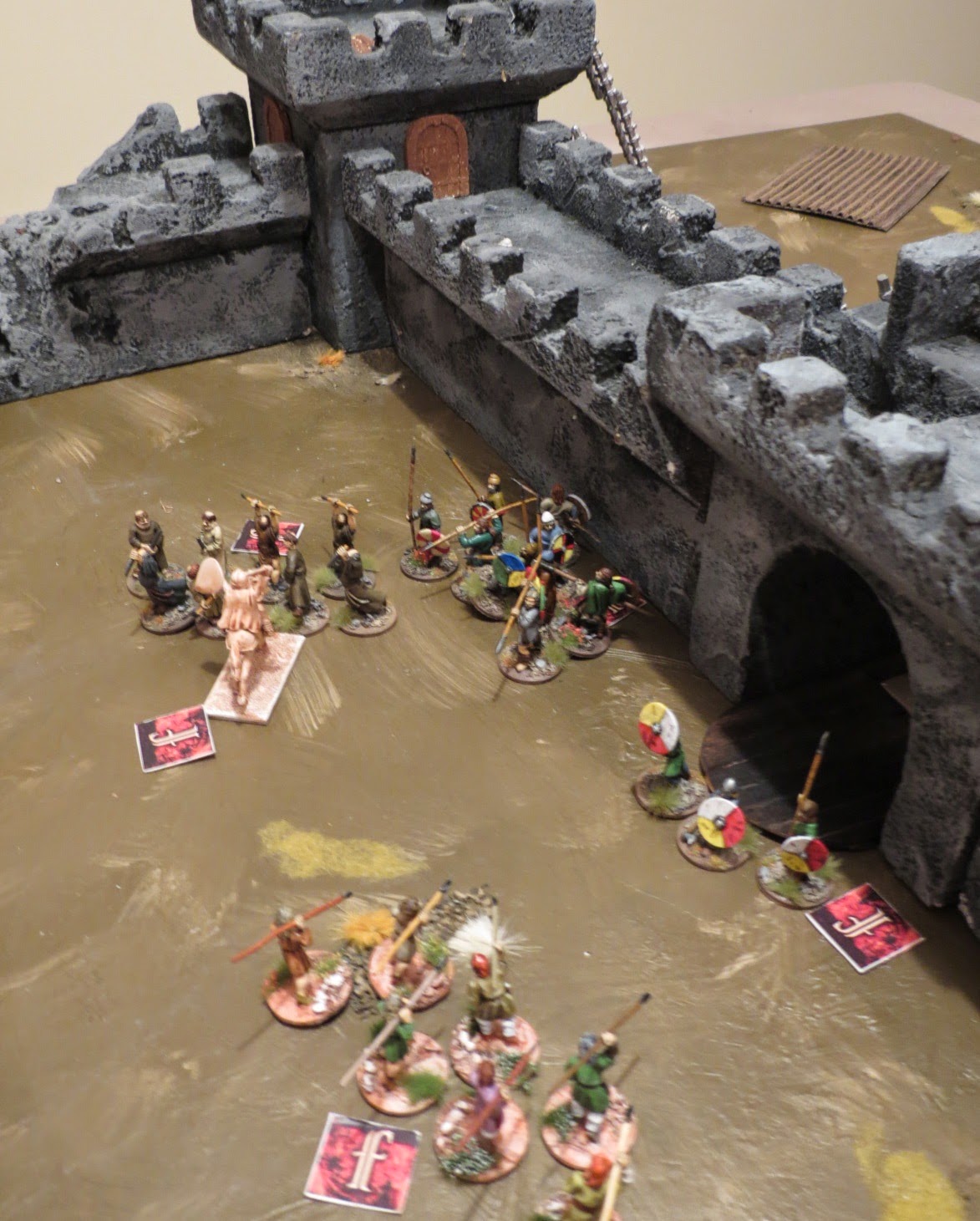 TURN 6
Crusaders: - I get Fury of Swords with my Corruption. His Knights charge my Warriors but with dance of spears they are proven not up to the task with no hits on either side. His Monks charge my Warlord (oh no) and with his Peasants Crusade and his Holy Land skills the now Warrior monks put an impressive amount of dice but funny enough they fail to hit him, the Warlord kills 3 in return. Gaining 2 rare dice for the monks loss and placing them in his combat pool the Pilgrims (now Warriors) charge my Warlord as well - this proves too much and he is thrown of his horse and killed , the Warriors charges my Warriors with 1 kills for a loss of two of their own. 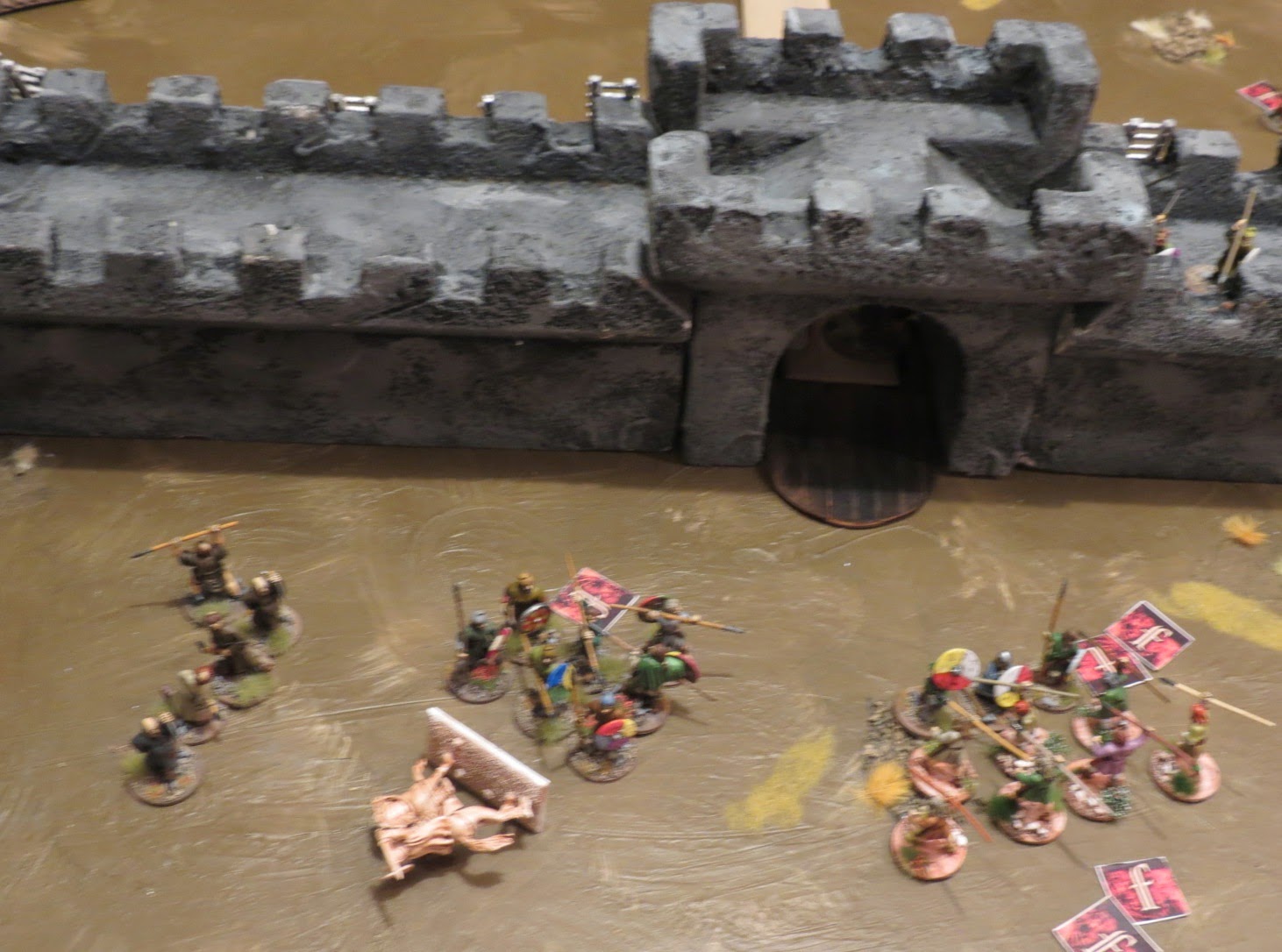 Moors:- With some pitiful and low amount of dice (no rares) My Hearthguard charge into Andy's Knights killing them. With their battle rage up and with with the loss of their warlord that makes them mad ! they then charge into the Pilgrims with a killing frenzy and slaughter 6 of them for a loss of only one in return. 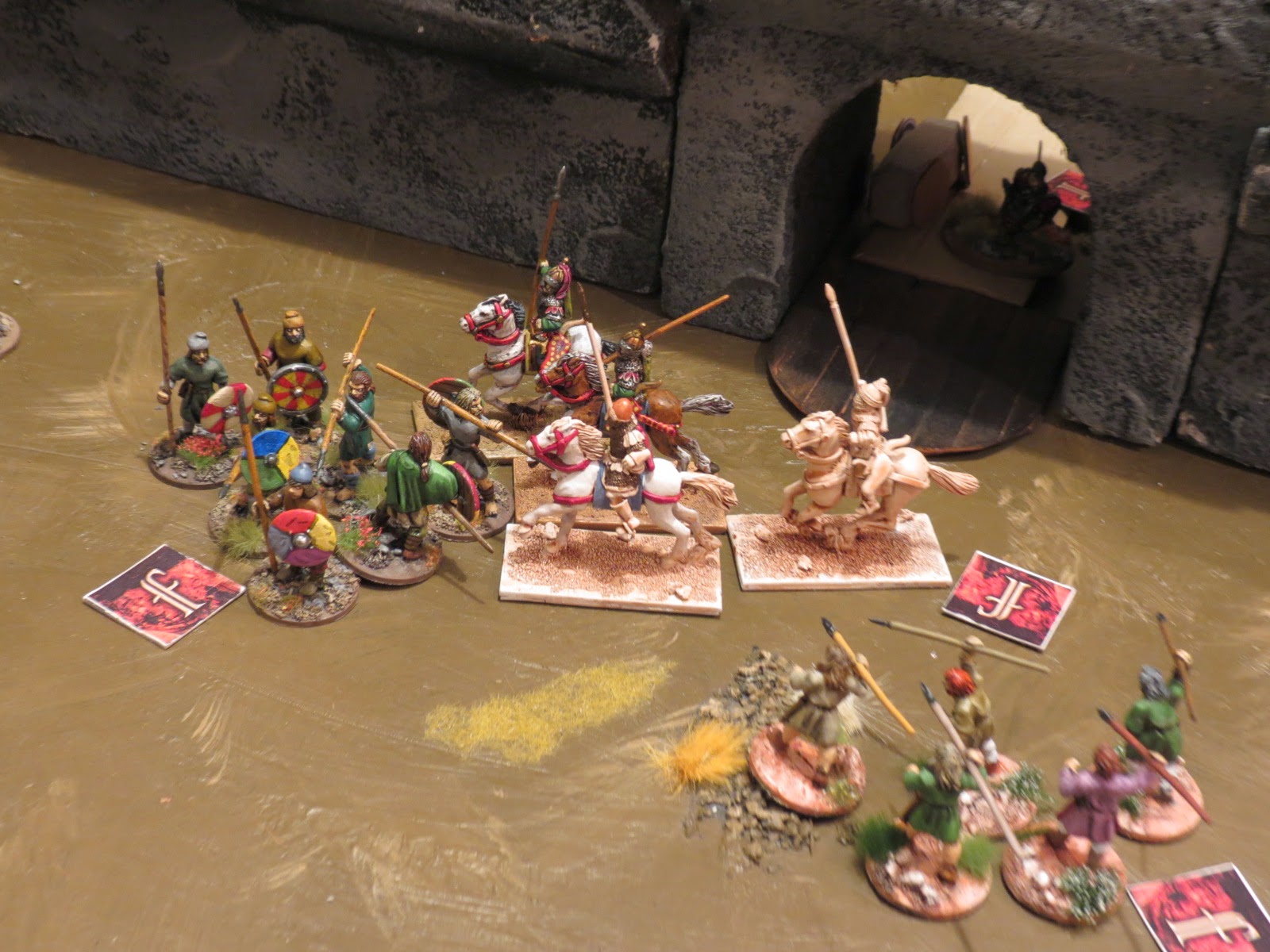 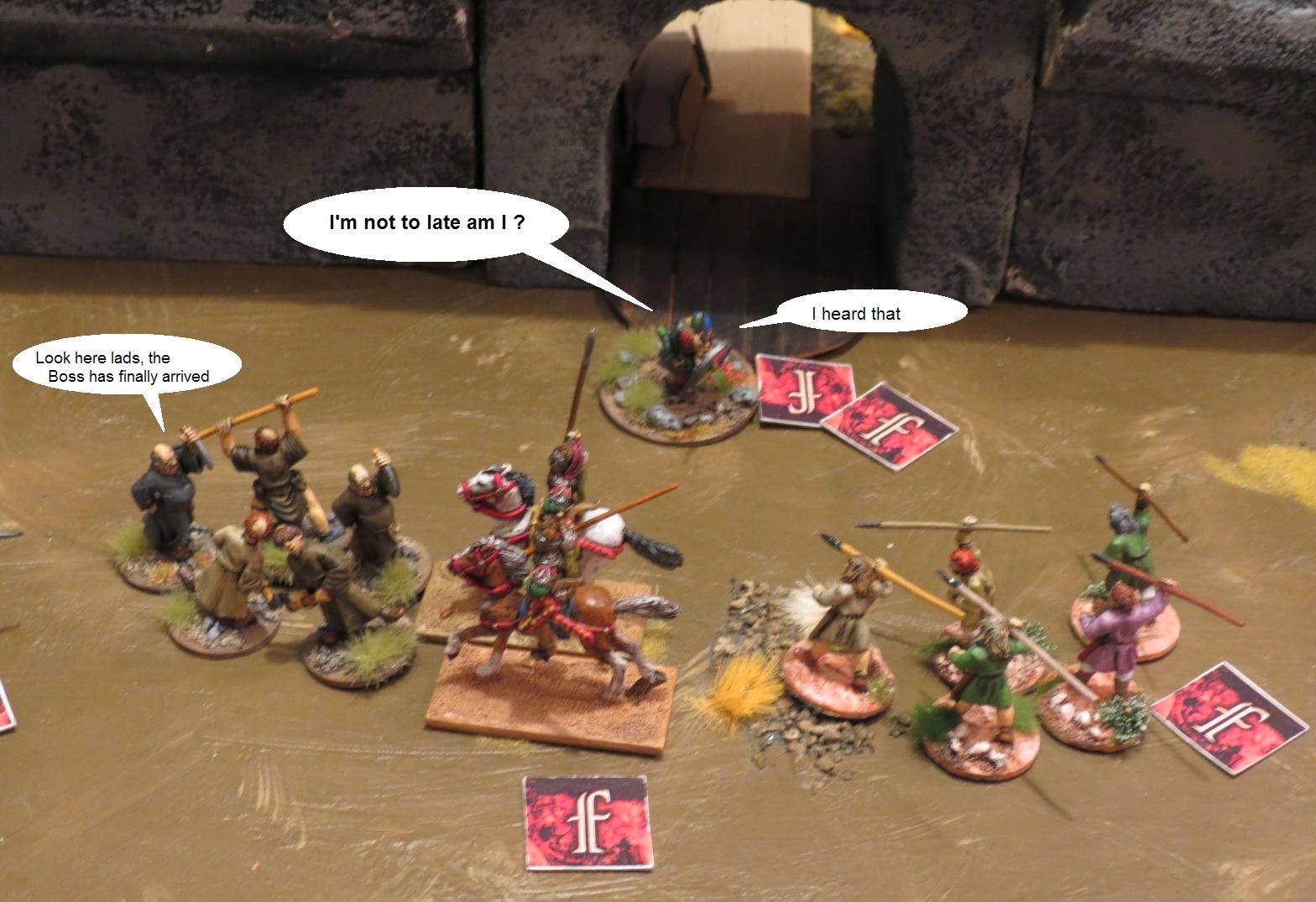 FINAL TURN 7
Crusaders - Andys Warlord uses Ascalon and kills my Hearthguard off, he then charges the Warlord into my Warriors but manage to break out the handbags as we don't hit anything.
This pretty much ends it for Andy

The Scores was 15 points Crusader dead and 14 points of Moor dead ... so a win to the Moors.  I also had more models in the inner courtyard area than Andy.


That was a very close and some what tense battle at the end there. Lots of shooting, melee and good use of skills by both sides to make a great game.  If you have some walls lying around I suggest giving the mission a go.... lots of fun.
The mission itself was balanced with the defender having only 4 points to the attackers 6 points, as the attacker has to spend some time assaulting the walls and putting rams and such things in place. Maybe we should try siege towers next time !

Hope you enjoyed reading this, what a novel ....
Until next time.... hopefully more frequent now that I am back from my holidays
Cheers, Mark.