Its been a while since I played a Flames of War game ... last September in fact, so with it been a wet horrible last Sunday evening, my brother and I choose to have an early war game. I decided to use my German Glider force and Andrew wanted to try out his Polish tanks.
Mission was a Free for All with 1500 points to keep things simple.

A good tank list , the tanks are all AT6 with 4+ FP and armour 1 which is standard for EW. All rated as Fearless Trained except for the Zmotor troops and AT guns which are Fearless Veterans. The thing to watch out for in this list is the pesky bypass unit of Rifle men - they can be a pain in the backside.

All fearless veterans, all very expensive and something I am not used to running (confident conscript being more my style) but with being able to glide down in every mission with a platoon that's almost a 1/3 of your army (450points) and watching them either crash and burn (quite literally) or strike out and gain their objectives ... 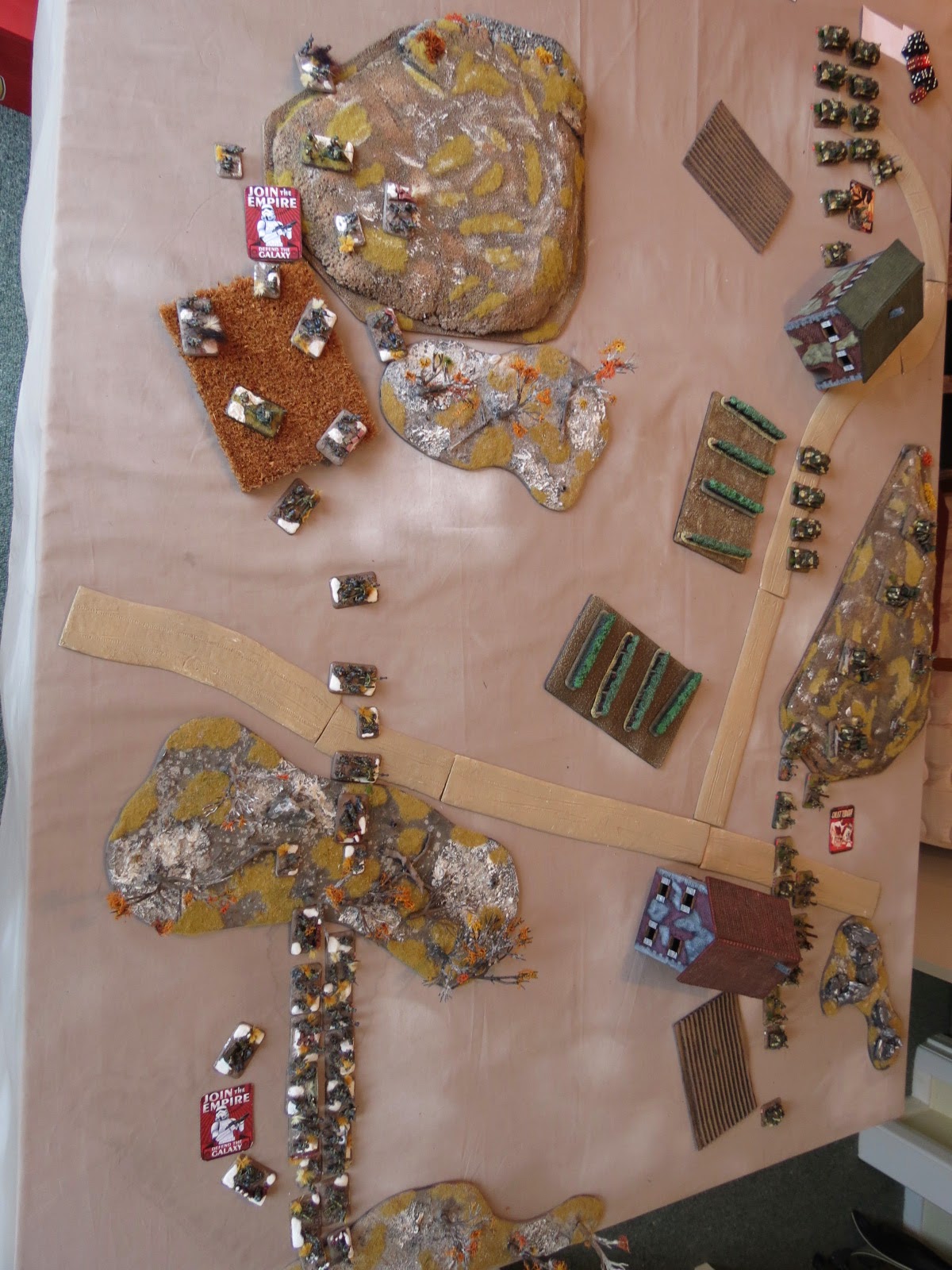 This is what deployment was - I deployed on the near side with pioneer and 2cm AA on left and AT guns in middle with everything else on right corner, Andys tanks are all on upper left corner with Artillery in middle and Zmotorzowanej Infantry platoon and TKS in right corner.

Andy gets the first turn (that's what I wanted) He moves all his tanks up towards my pioneers,
and digs in arty and Zmotorzowanej Infantry.
My turn and I decide to send my Glider boys after the artillery platoon, they all land safely !  - also dig in my pioneers, move my Fallsjirmjager platoon up with AT guns and smoke the TKS 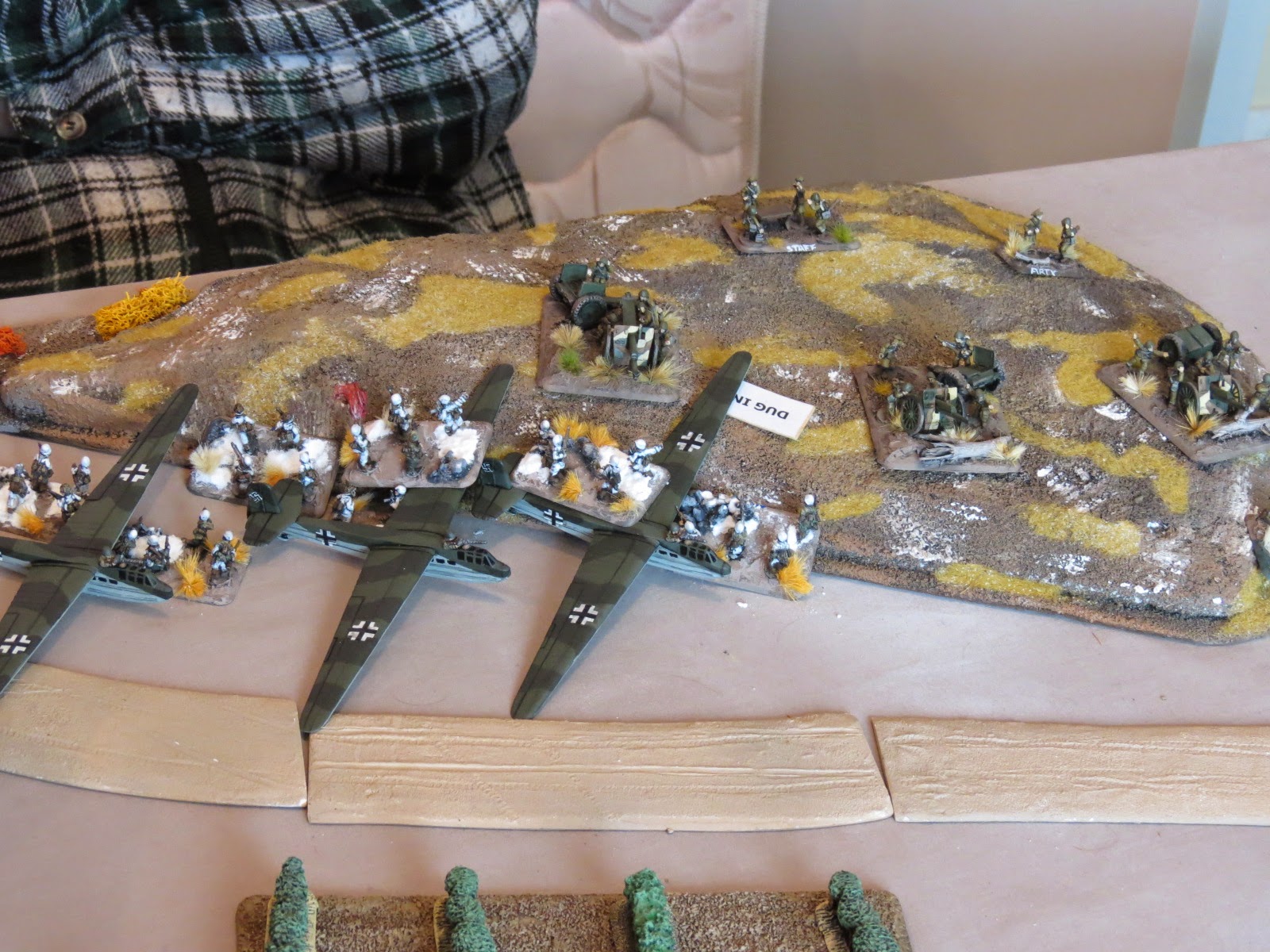 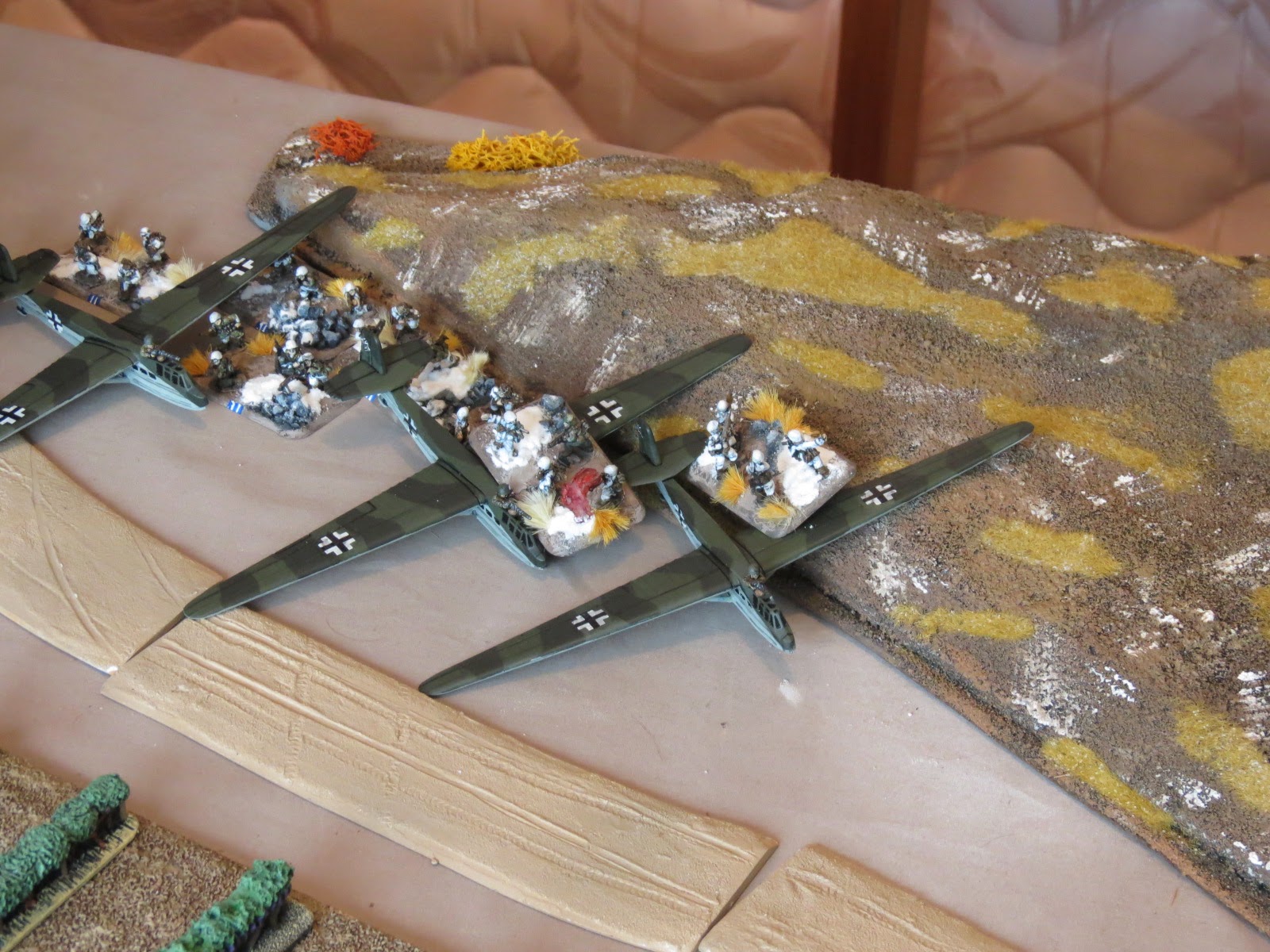 And this is what was left after the assault - no more Artillery battery as my boys hit good, and
Andy fails his 3+ morale and runs away. My boys then dig in after this - as one of their rules state that the Luftlandersturm platoon can only claim objectives on or after the 6th turn - so digging them in will give them protection until the foot slogging lads get there. 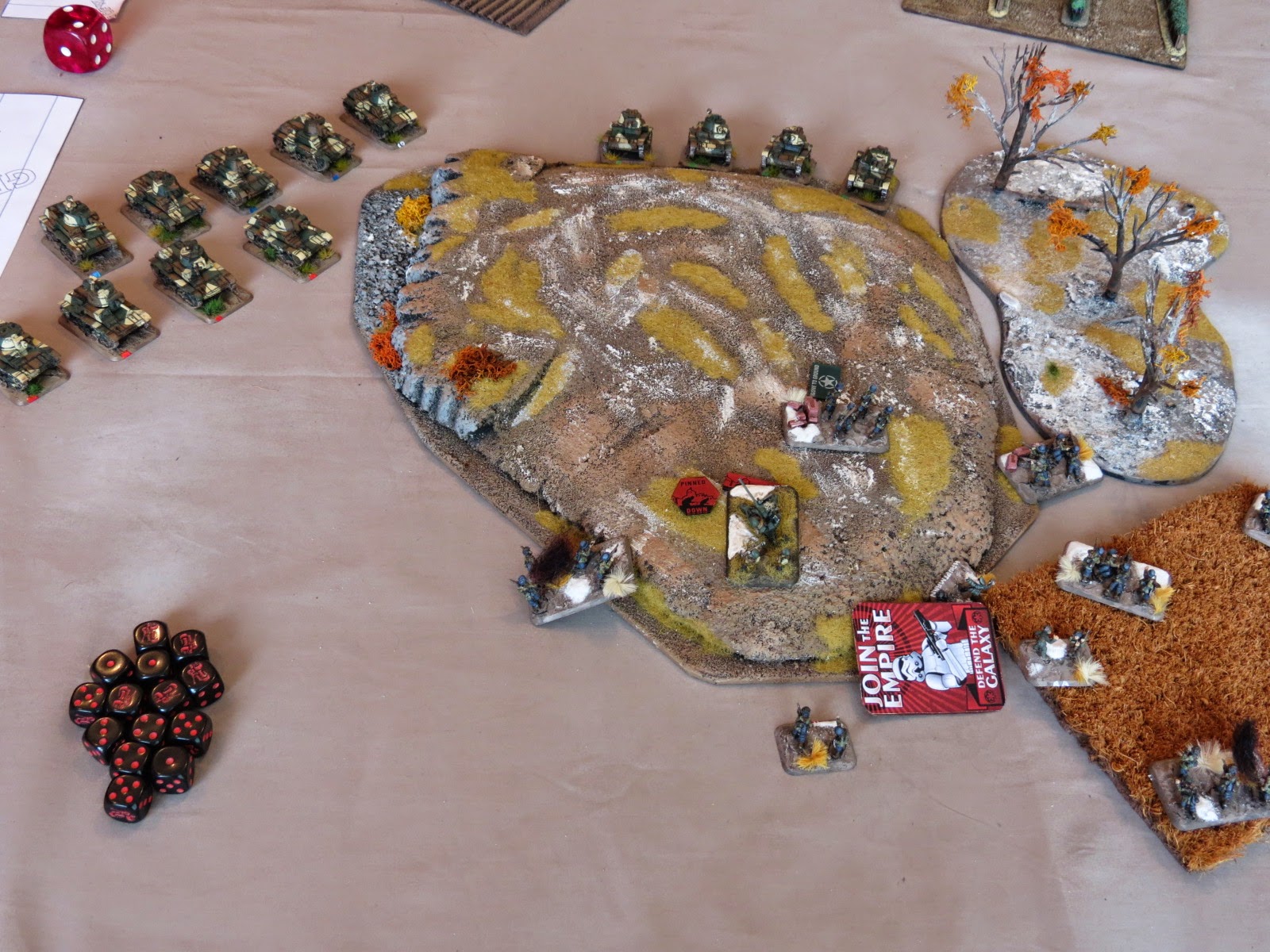 On the left Andy starts to envelope my pioneers with his tanks, but only pins down
my AA gun and kills one stand infantry. 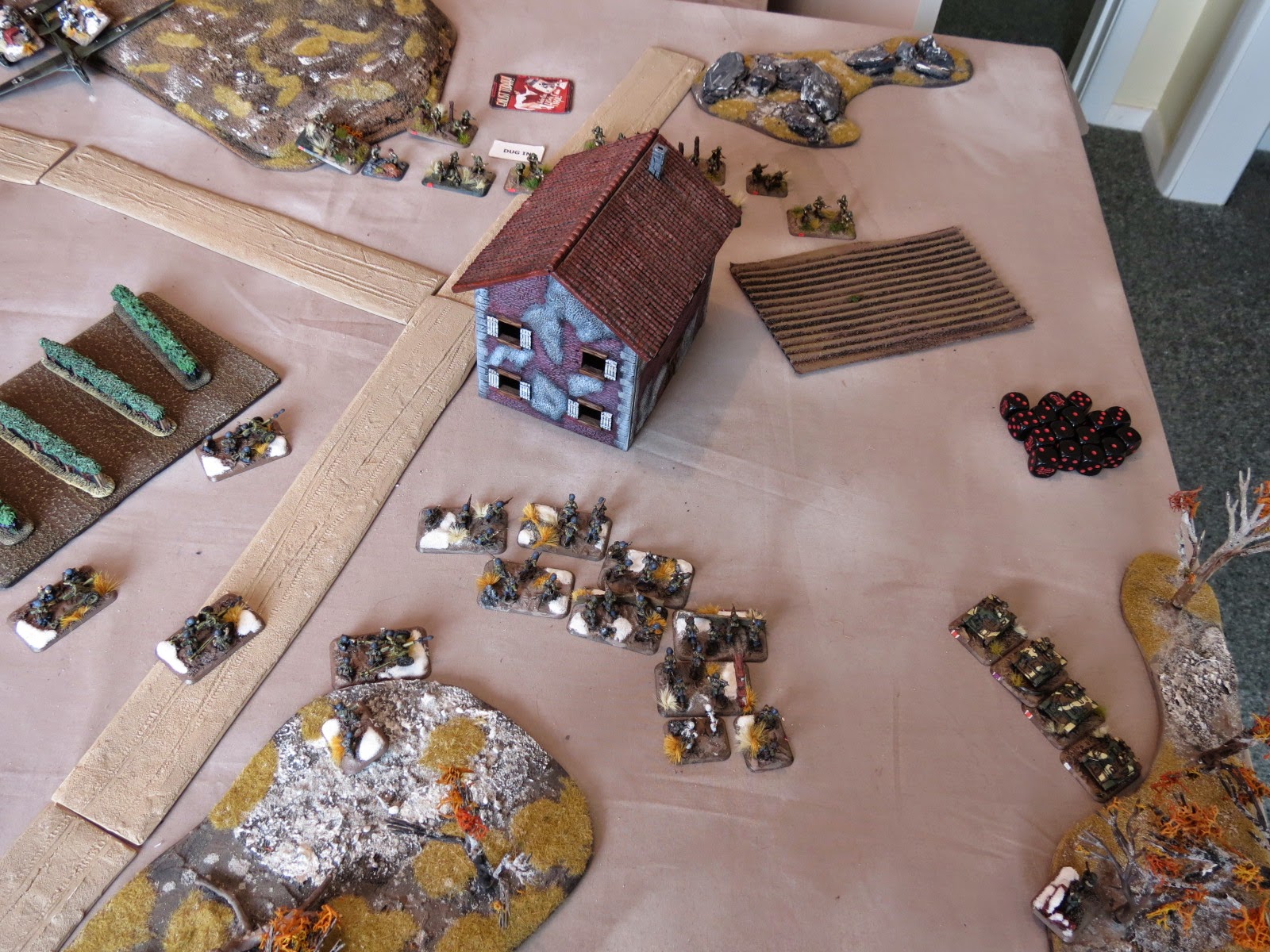 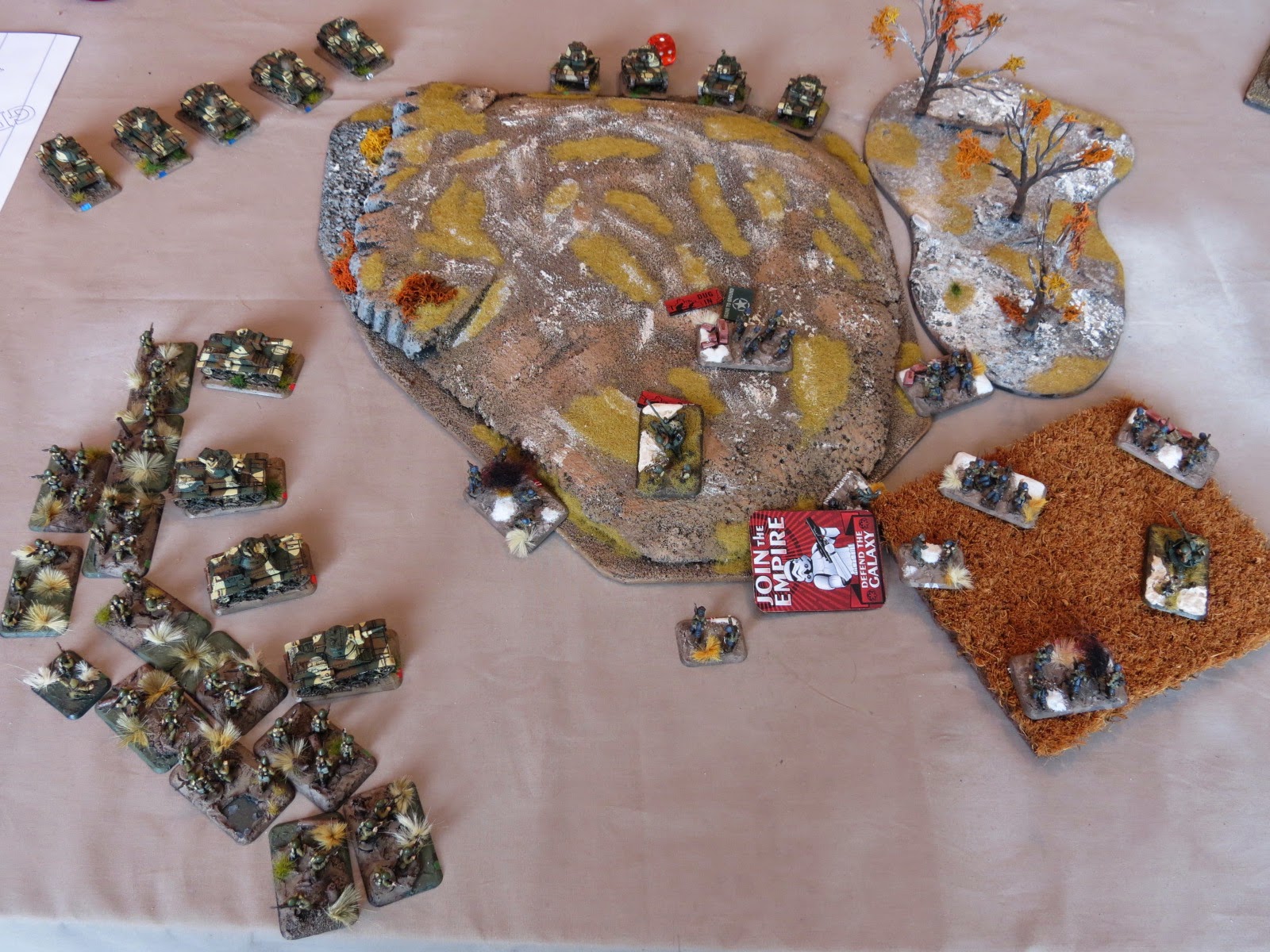 Turn 3 and Andrews bypass Piechoty Rifle unit arrives (automatic on turn 3 for reserve)
and as it is a scattered reserve it arrives in exactly the right spot for him, next to his attacking tanks!
He kills my AA gun and another pioneer team. 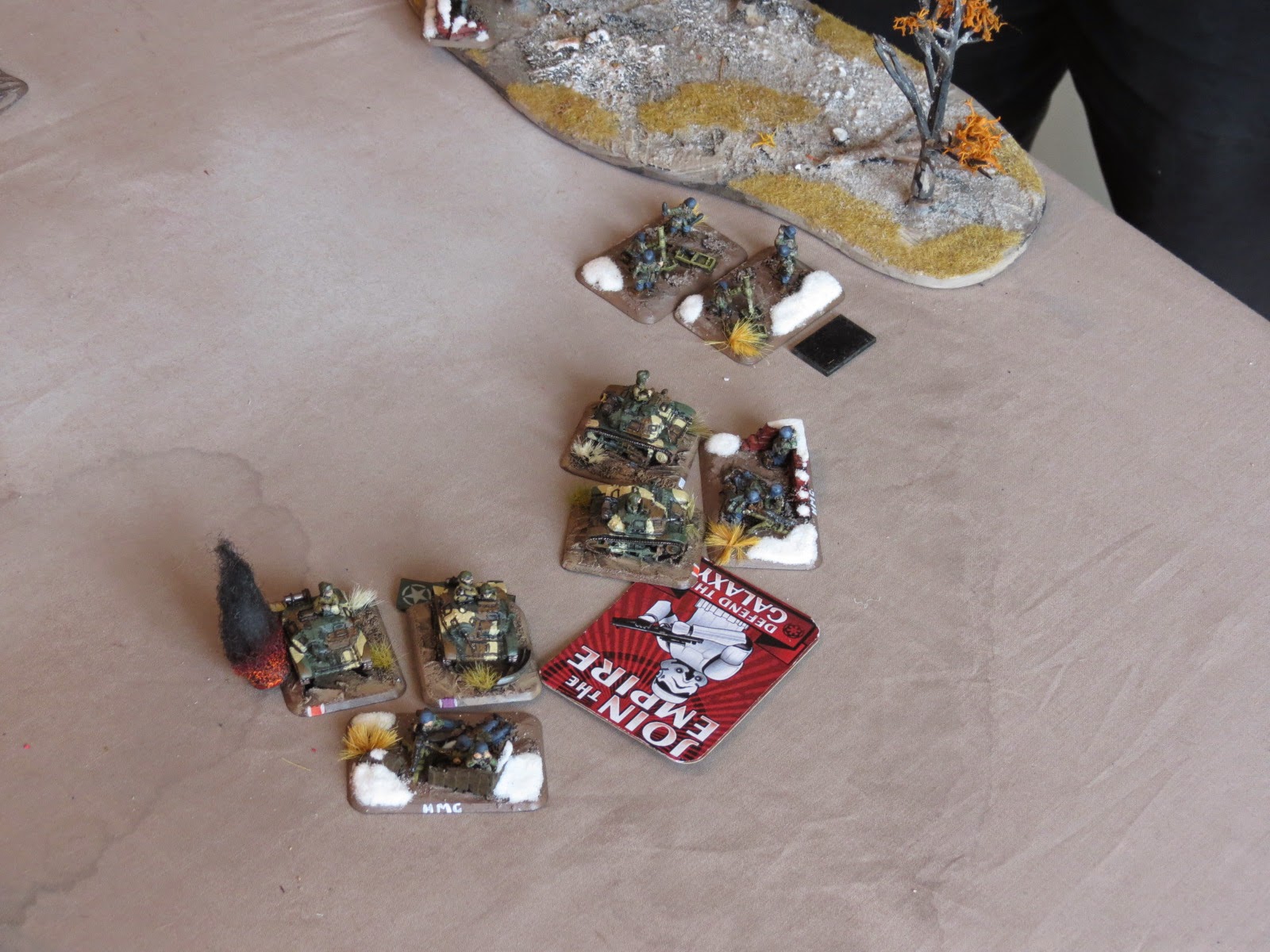 He then assaults my HMG on the other side with his TKS tanks - which are incidentally
facing the other way as to deter the bypass unit arriving there (typical) so only one bails due to
direct mortar shots in defensive fire. Andy then kills my 2 HMG teams ... I then break off 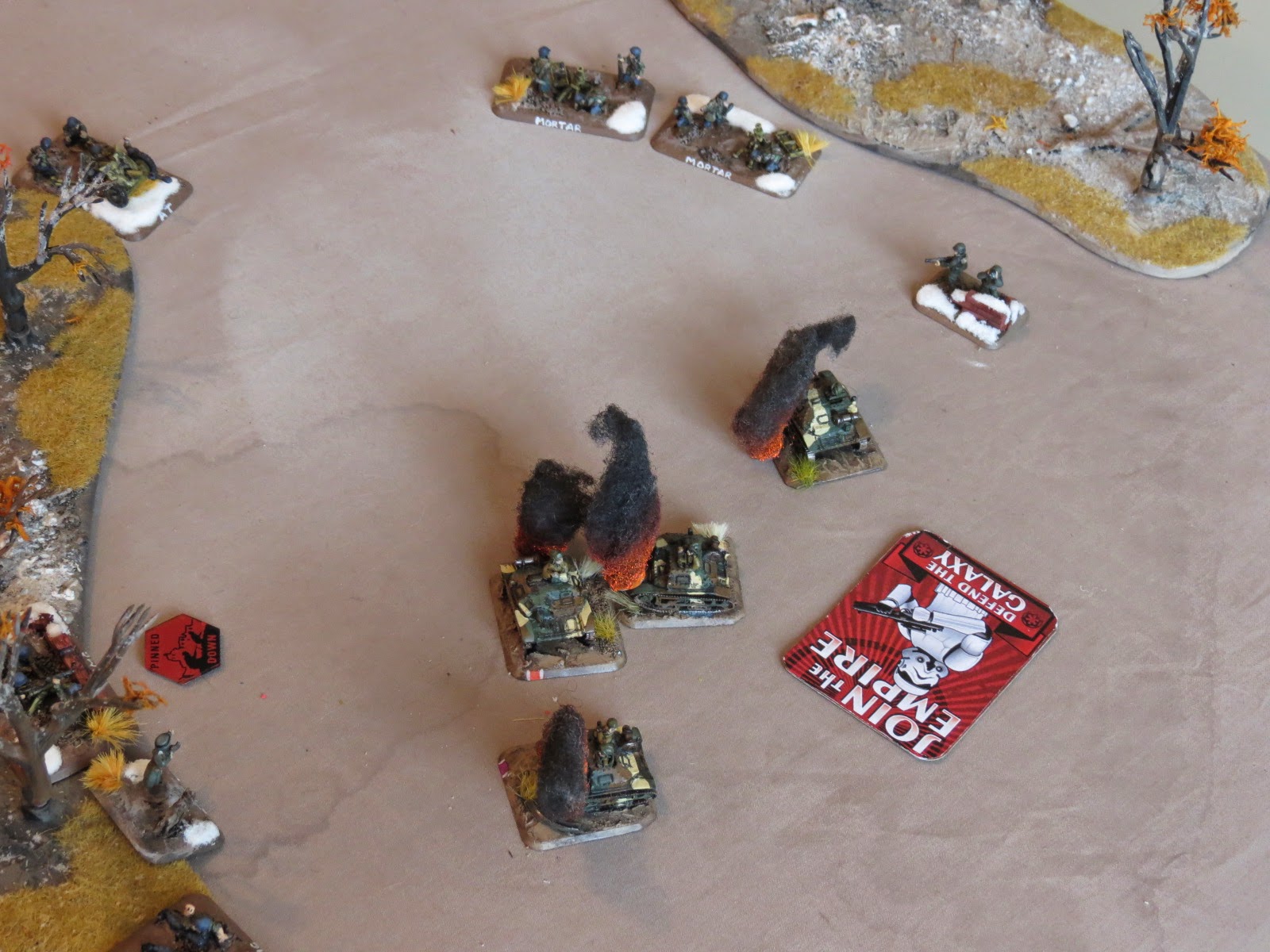 And in my turn unpin the mortars, and surprisingly manage to kill 3 TKS tanks with direct firing mortars !!
They are only FA0 so AT 2 can kill them ... got to love early war for this 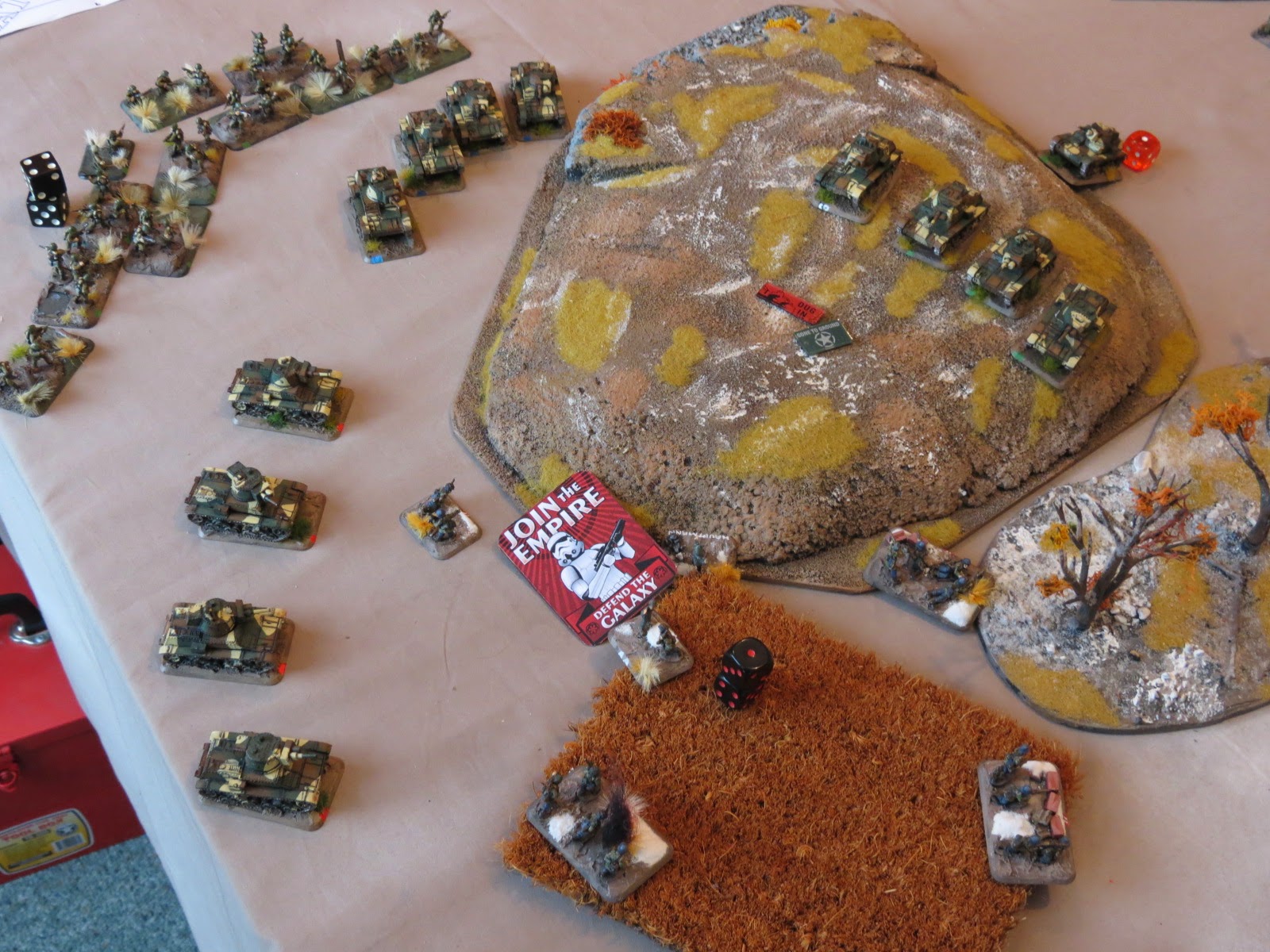 On the other side things are starting to heat up now ! I have lost a few more pioneer teams and my rubbish AA gun can not hit a barn door ! and then gets himself killed. My flamethrower team kills a couple of rifle and pins them down for a turn - good job. 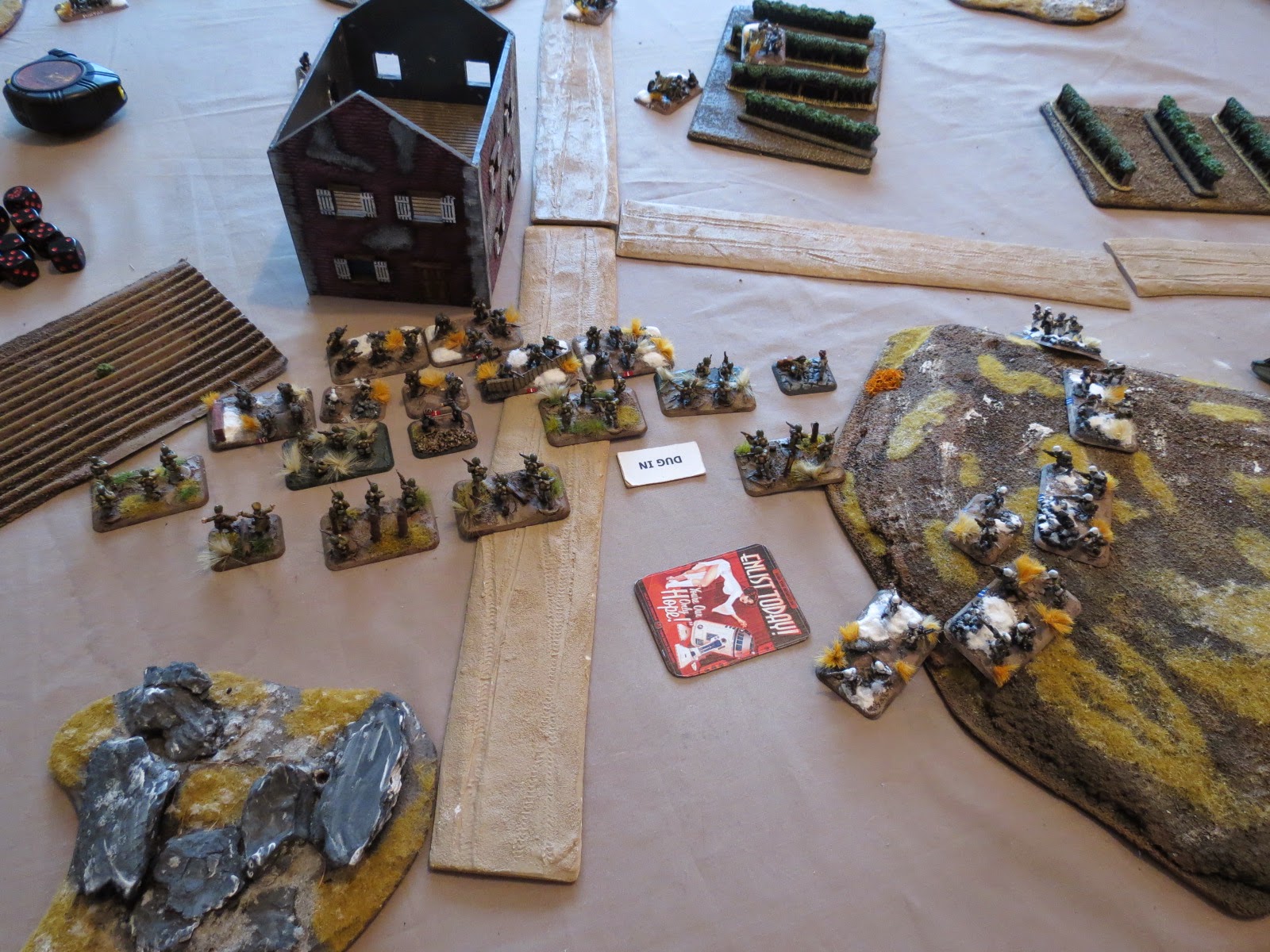 Meanwhile.... on Andy's objective my Fallsjirmjager assault from the farm building into the Zmotorzowanej platoon after pinning them down with AT fire from Pak guns,
my glider boys join in the fun 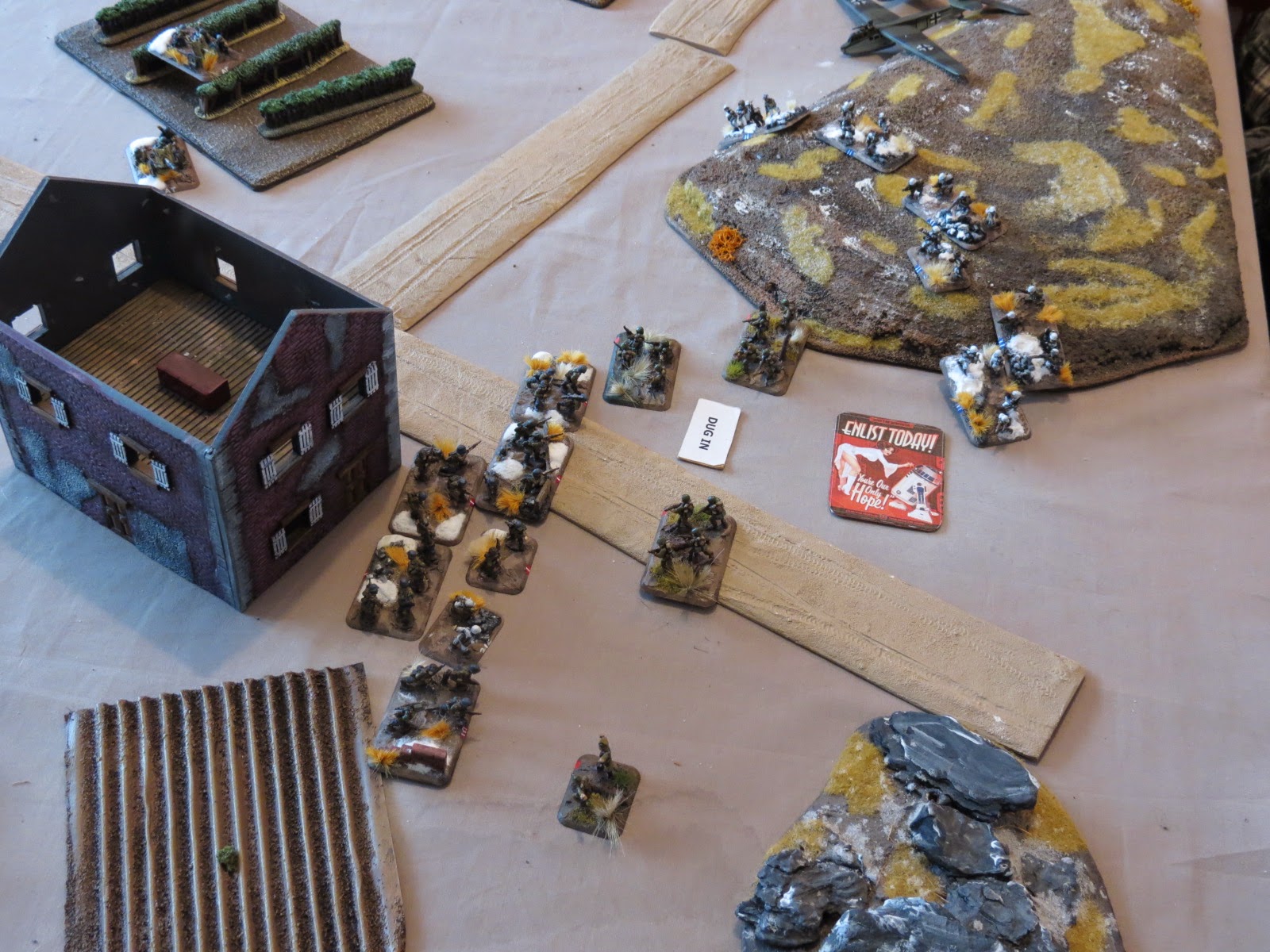 Andy hits back in the assault with only 4 teams left, and after a couple of turns assaulting each other 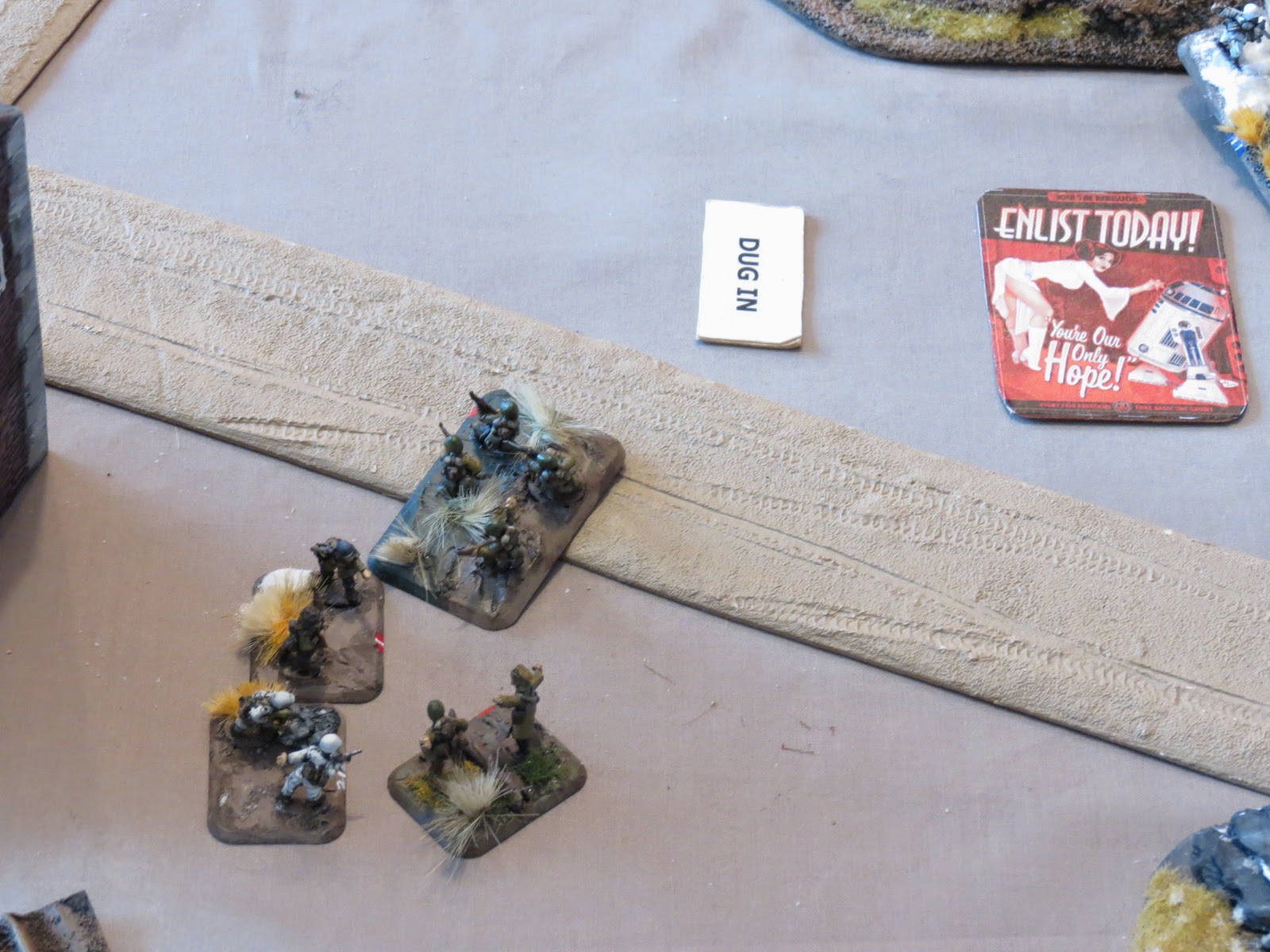 We effectively both wipe out our units, as I fall back with Fallsjirmjager
and fail my morale test, but so does Andy's Zmotorzowanej unit as well. 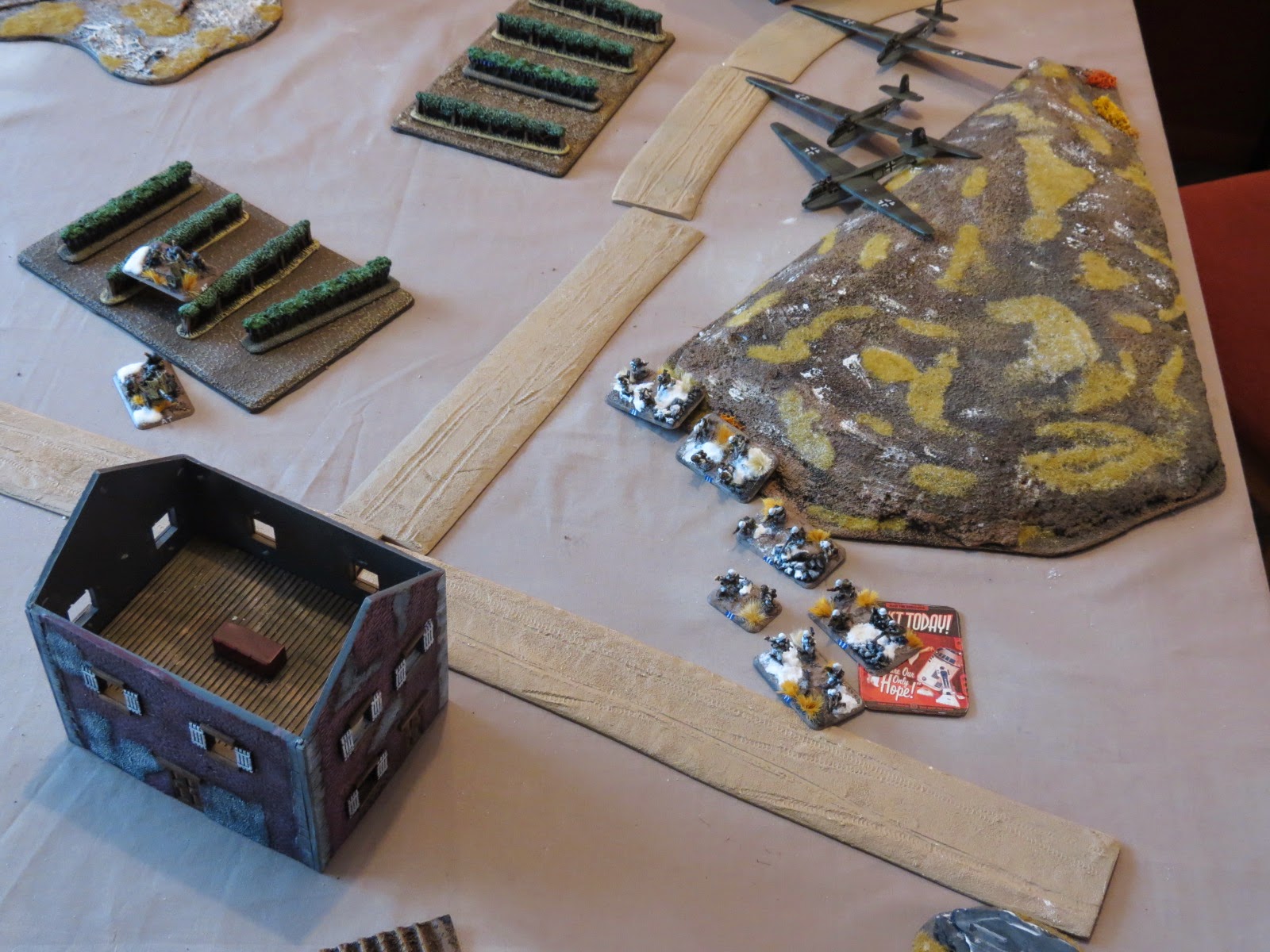 So my Glider boys sit tight on his objective, now only have too wait one more turn before they can claim it. 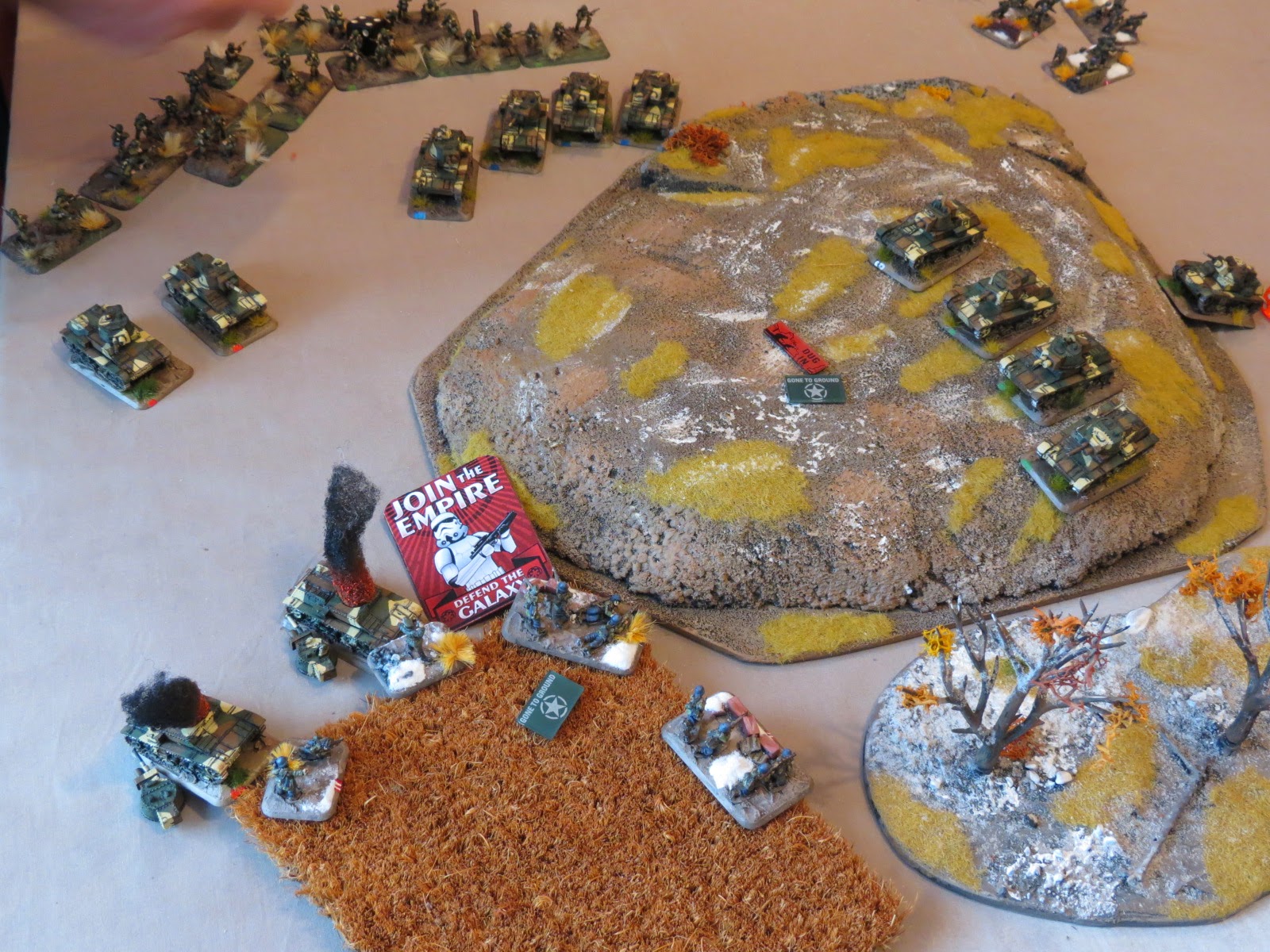 Andrew steps it up a gear and assaults with his tanks, his only chance of
winning is too kill my pioneers and get my objective this turn 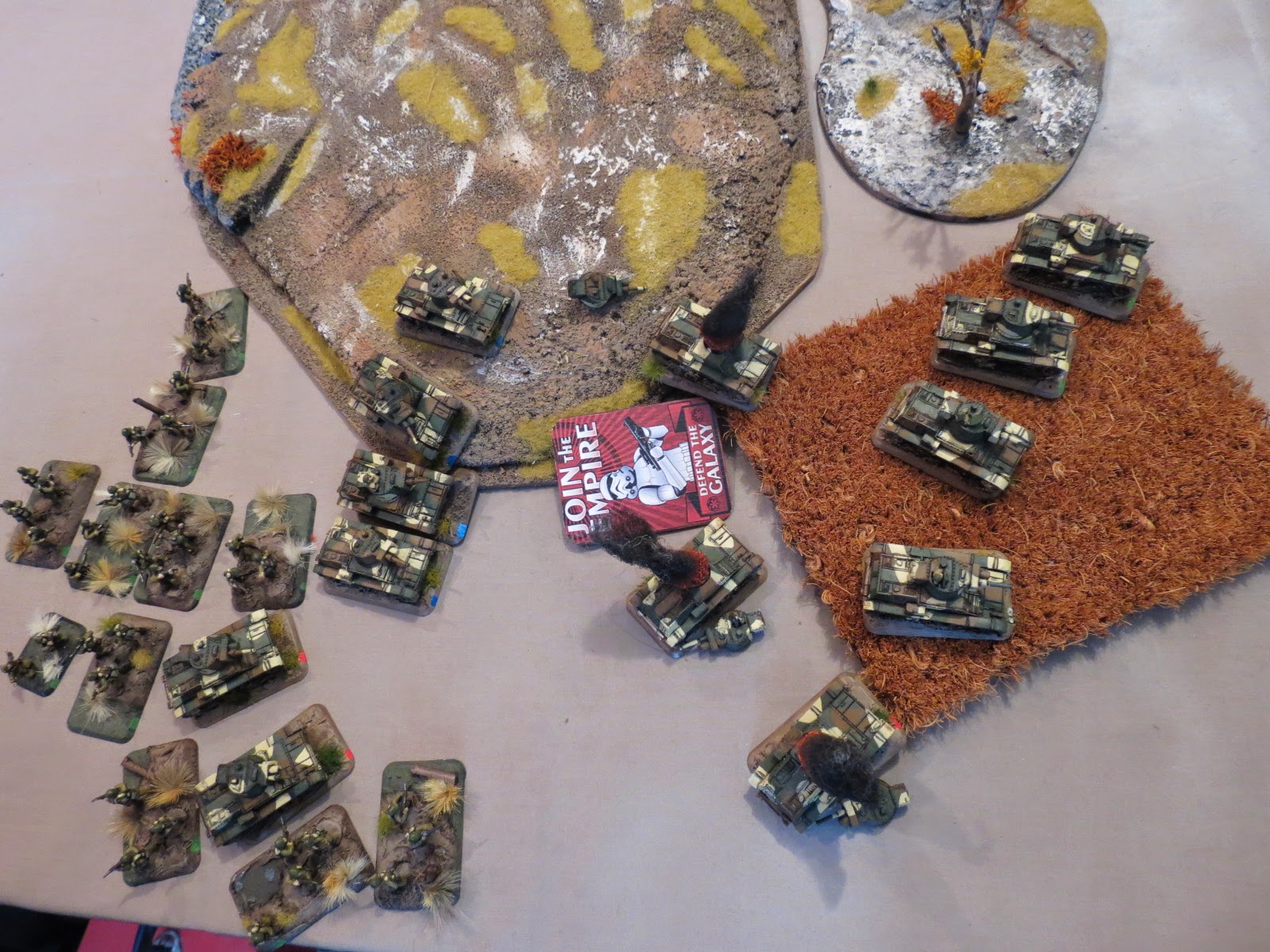 Disaster ! (well for me that is) Andy kills all my pioneer teams for the cost of 3 of his tanks
He assaulted twice but finally got there. 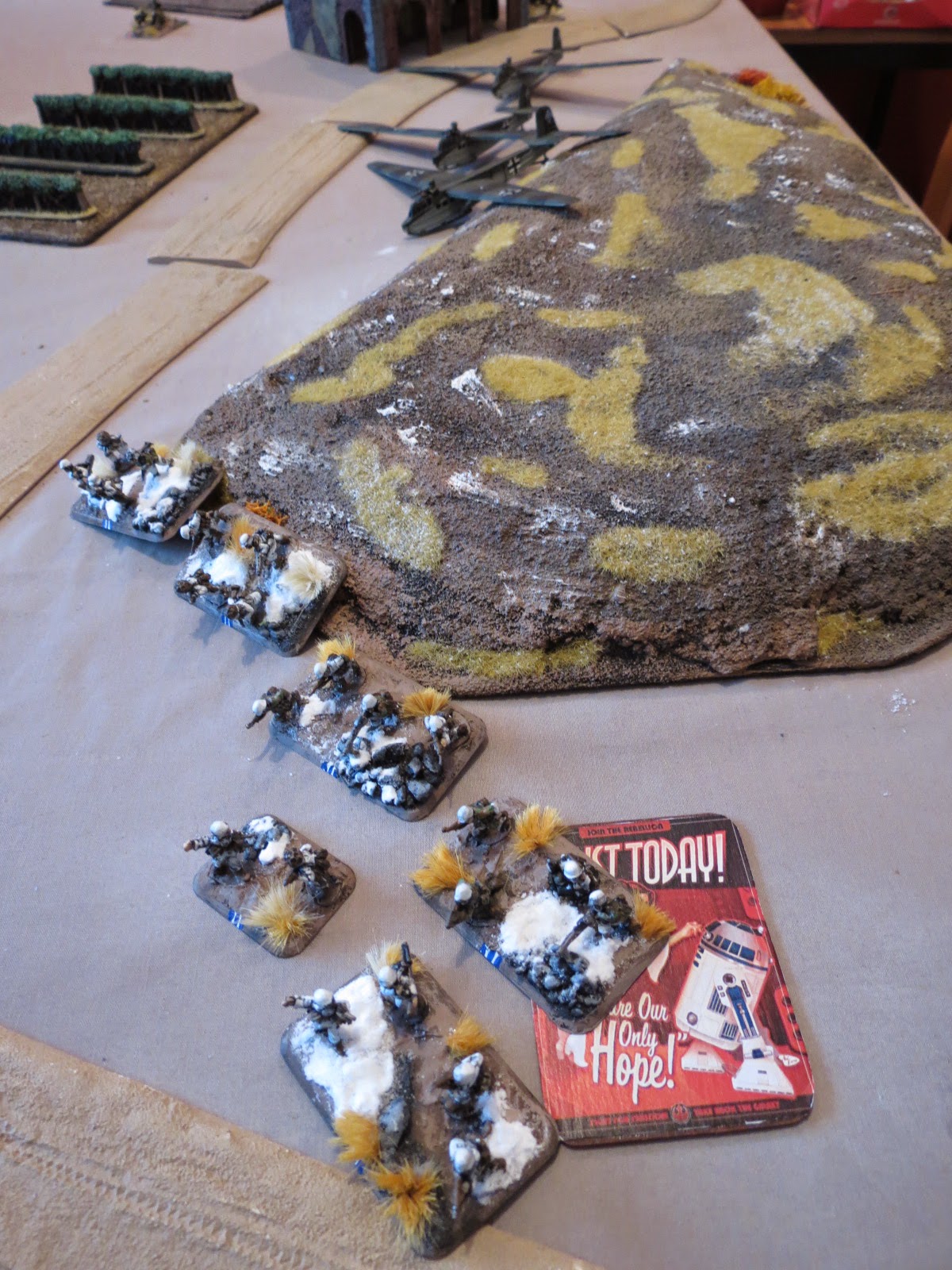 My glider boys are one turn too late but as it was turn 6 so it was the best they could of done.
If I pushed my Fallsjirmjager a bit harder (and passed the odd storm-trooper move
maybe as I failed it twice) but as they wiped out by the Zmotorzowanej platoon I think it was probably better to assault first with the glider platoon then the Fallsjirmjager platoon on perhaps .... 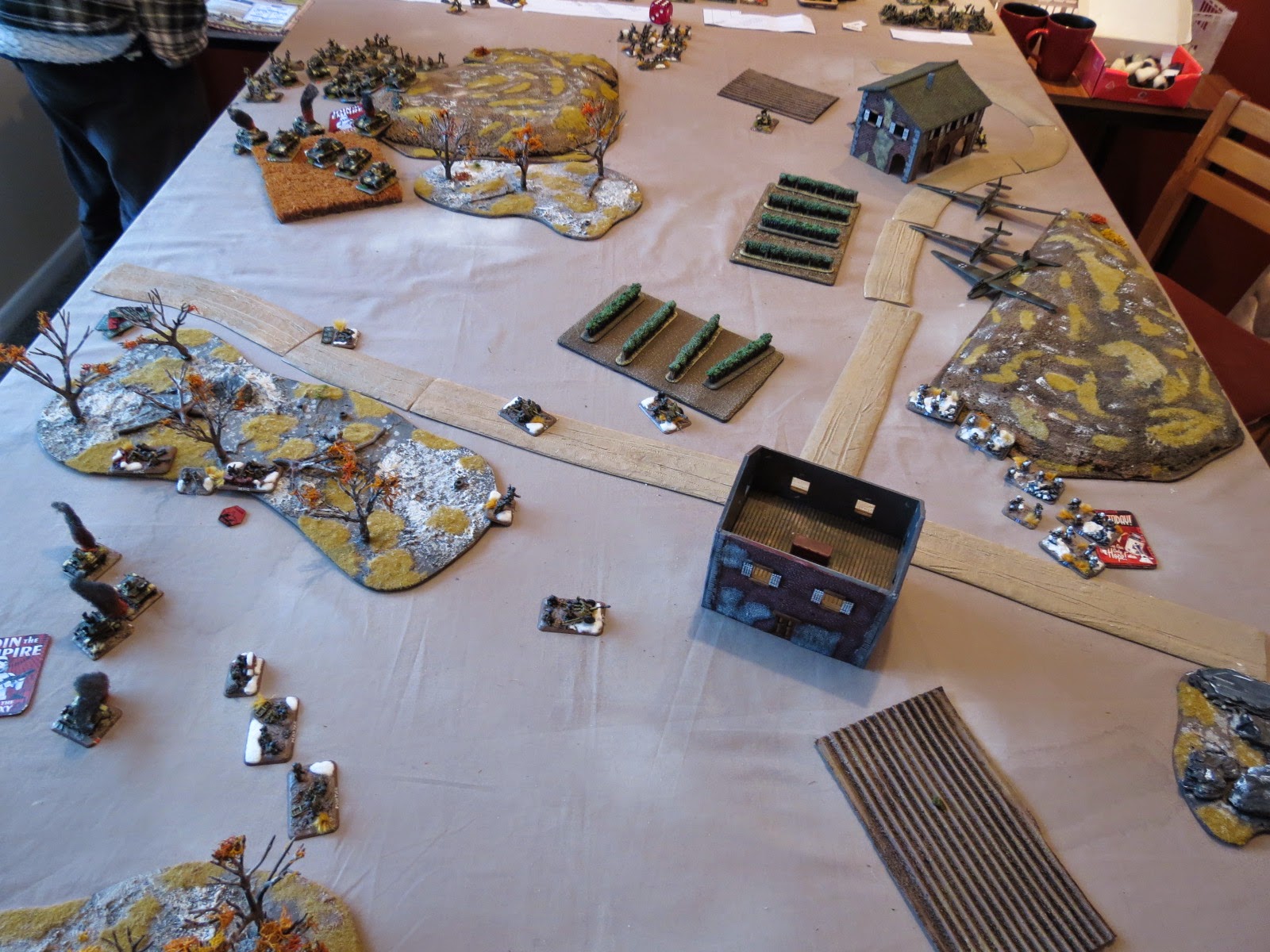 The end table shot, not much left after lots of blood shed and burning tanks.
A very good game and 4-3 result to the dirty Polish tanks